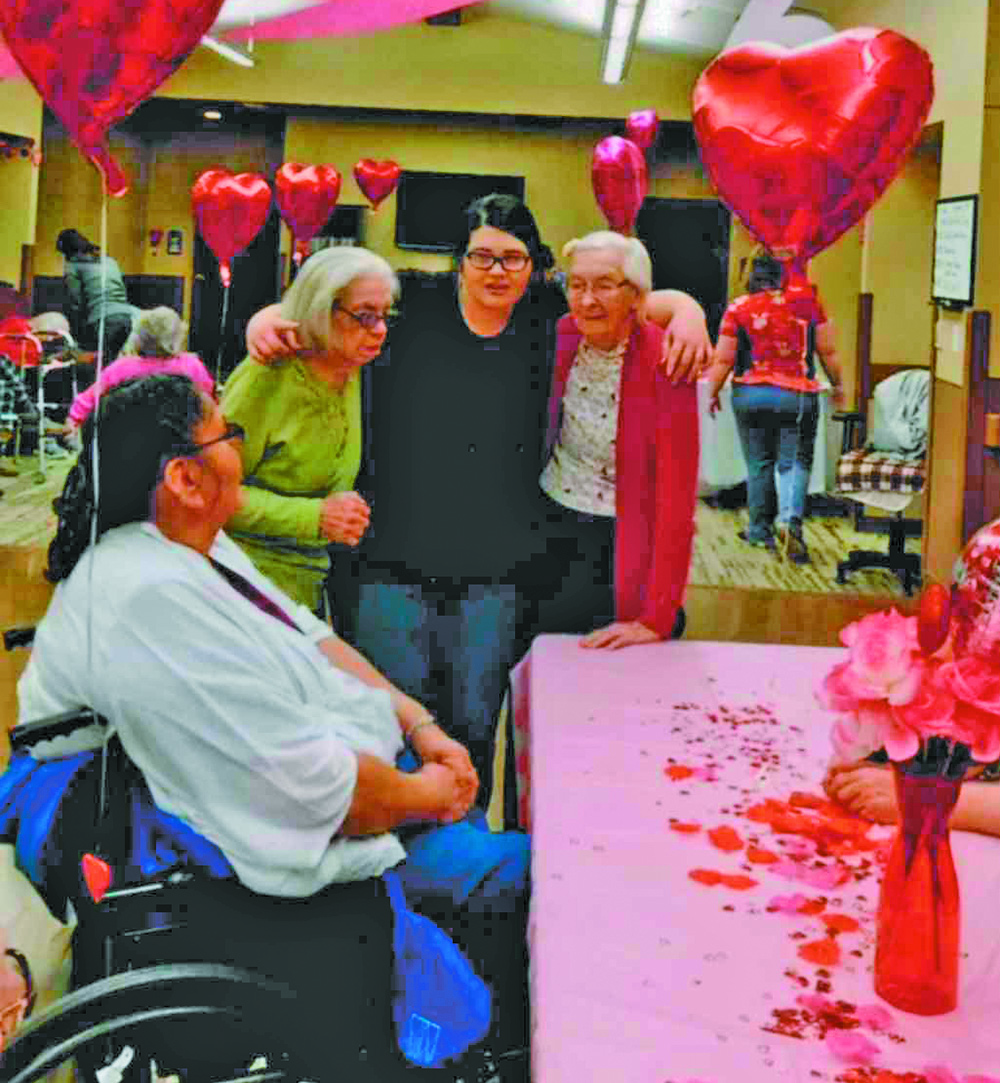 Social interaction, as shown in this previous Valentine’s Day party at Seven Sister’s Living Center, is important for the prevention and progression of Alzheimer’s Disease. Unfortunately, due to the COVID-pandemic, elderly are now experiencing more social isolation which scientists feel will cause symptoms of Alzheimer’s Disease to increase.

HOT SPRINGS – The month of September is World Alzheimer’s Month, and thanks to a $5,000 grant from Black Hills Energy, two behavioral health nurses with Fall River Health Services will soon become certified trainers for Alzheimer’s Disease and Dementia Care. Their training will in-turn help educate and bring awareness of the disease to other local healthcare professionals in the area as they have plans to share their knowledge, not only with other health professionals at Seven Sister’s Living Center and FRHS’s clinic and hospital, but also with others at Pine Hills Assisted Living, the State Veterans Home and other community entities.

Megan Curran, who will be participating in the upcoming 12-hour Zoom class with fellow Behavioral Nurse Cynthia Hughes, said the importance of being able to understand and treat Alzheimer’s Disease is more important now than ever, due to the COVID pandemic-caused restrictions and isolation that many elderly now endure. Curran said that social isolation is a major source of mental and psychosocial stress. It can increase the risk of dementia and cognitive decline.

“The Alzheimer’s Association predicts that we will continue to see a steep increase in the number of elderly with Alzheimer’s,” Curran stated in the grant application submitted to Black Hills Energy. “As the number of elderly living with Alzheimer’s increases so does the burden of caring for them. Educating caregivers to adequately and appropriately care for them is essential to lightening this burden of care and increasing quality of life.”

Behavioral Health services was added to Fall River Health Services in 2015. The facility’s behavioral health department has grown tremendously since it began. It now includes a psychiatrist, psychologist, nurse practitioner and two nurses. They provide services to a large geographical area spanning several states in a rural setting with limited resources, including patients and communities as far away as Pierre to Gillette, Wyo., to Alliance, Neb.

Curran is a nurse for Dr. Brian Wilson, D.O., while Hughes works with Tracy Romey, N.P.

According to the CDC, Alzheimer’s is the most common type of dementia and is one of the top 10 causes of death in people over 65 years of age. Alzheimer’s is an incurable, unstoppable disease that is fatal.

Scientists do not yet fully understand what causes Alzheimer’s disease. There probably is not one single cause, but several factors that affect each person differently.

Researchers are studying whether education, diet, and environment play a role in developing Alzheimer’s disease. Scientists are finding more evidence that some of the risk factors for heart disease and stroke, such as high blood pressure and high cholesterol may also increase the risk of Alzheimer’s disease.

The CDC states that there is growing evidence that physical, mental, and social activities may reduce the risk of Alzheimer’s disease.

While there is no known cure for Alzheimer’s, health professional like Curran and Hughes are hoping their training will help them teach others how to treat people with the disease by helping people maintain mental function, managing behavioral symptoms, slowing or delaying the symptoms of the disease.