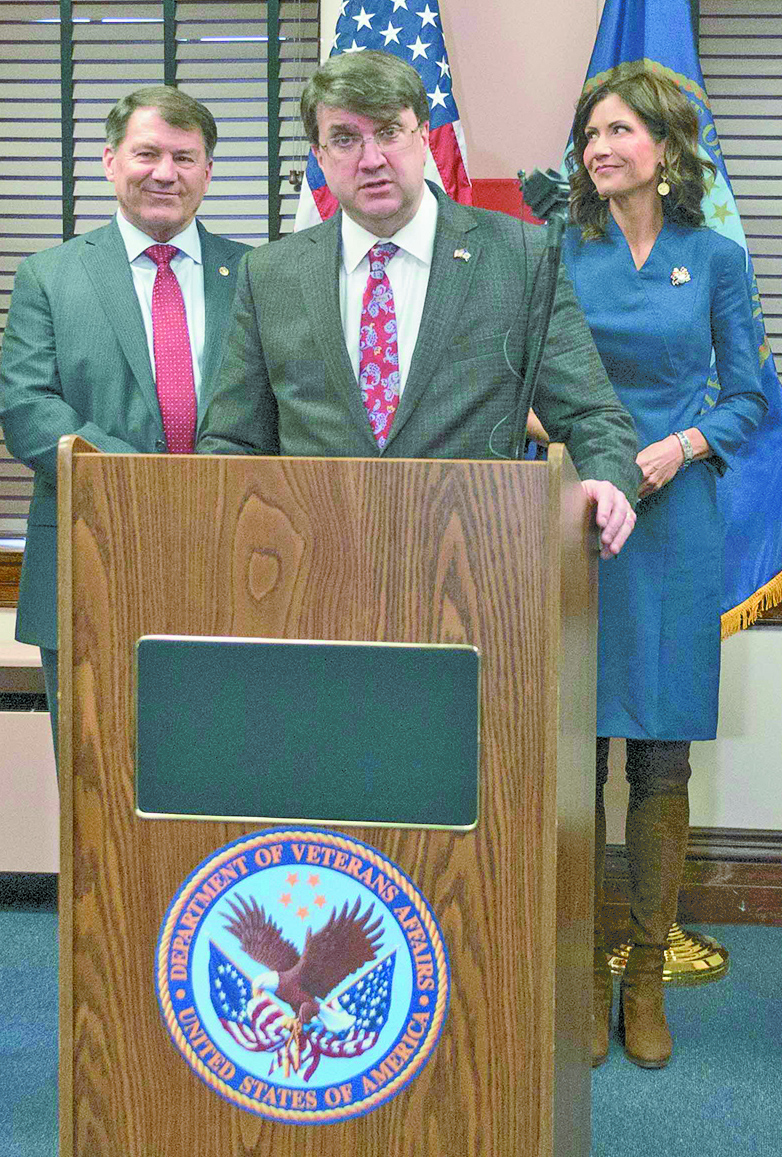 In a press conference held in Hot Springs on March 2, 2020, VA Secretary Robert Wilkie was joined by South Dakota’s full congressional delegation and governor where he announced his plans to take a new look at the previous decision to close the Hot Springs facility, while adding that “it will not close.”

HOT SPRINGS – Back on March 2, 2020, local veterans and Hot Springs area residents heard some good news when VA Secretary Robert Wilkie announced publicly that he was going to take another look at the Record of Decision which set forth a reconfiguration plan to close the Hot Springs VA Hospital and Domiciliary and replace them with a community-based outpatient clinic.

At that time, with South Dakota’s Governor and entire U.S. Congressional delegation at his side, Sec. Wilkie stated that the Hot Springs VA “will not close.”

Last week, on Thursday, Sept. 10, Sec. Wilkie stayed true to his word when he announced that he was rescinding the previous Record of Decision – which came as great news to the many individuals and organizations that have been fighting to keep the VA open since the reconfiguration plans were first announced in December 2011.

“On behalf of the Hot Springs Save the VA Committee, we would like to thank our congressional delegation and Governor Kristi Noem for their support of Save the VA and the veterans who served their country,” said Pat Russell of Hot Springs. “We were all excited to see the decision by Secretary of Veterans Affairs Robert Wilkie to rescind the record of decision made by Robert McDonald in December 2016.”

“It has been a long and hard fight to keep this magnificent facility open for the veterans we serve,” Russell said. “We must now begin efforts to push the VA to start restoring a number of the services and employees that have been deleted since the merger of Hot Springs and Fort Meade VA in the early 1990s.”

In an email to employees of the VA Black Hills Health Care System, Director Sandra Horsman revisited the past nine years and some of the decision-making which went in to the 2014 Environmental Impact Study (EIS) and the Record of Decision which resulted from that study.

“In 2017, to formally complete the EIS, the Record of Decision (ROD) was signed providing a path forward to reconfigure the health care system,” Horsman said in her email. “Implementation of the ROD was prevented by language included in appropriations legislation that prohibited the diminishment of services within VA Black Hills Health Care System.

“Now, advancements in the delivery of health care and legislation like the 2018 MISSION Act have significantly expanded choice for Veterans to receive care in their own community, including new Urgent Care benefits,” Horsman stated. “Today, the environment of health care looks very different from when the initial proposal was presented nine years ago in 2011.”

Horsman added that VA Black Hills welcomes Sec. Wilkie’s action to rescind the Record of Decision which will “open new discussions to expand critical services in our most rural communities.”

Russell with Save The VA said that the Hot Springs VA has a long a legacy working and caring for the veterans of our nation.

“The past eight years have led to much turmoil and loss for our veterans,” Russell said. “The Hot Springs VA has encountered difficulty in recruiting and retaining employees to work at this campus because of the threat of closure. Now that this threat has been removed perhaps the Hot Springs VA can recruit quality healthcare professionals and retrain them to meet the needs of the veterans we serve.”

In her letter to VA employees, Horsman did address this point and stated that if Sec. Wilkie and the S.D. Delegation is able to repeal the appropriations language in the ROD, opportunities that the VA Black Hills can consider including “offering stability to the workforce to aid hiring and retention of highly qualified candidates.” Other opportunities she addressed included things like expanding access to Whole Health treatment options, exploring community partnerships and improving the current barracks-style living in the Residential Rehabilitation Treatment Program.

“It is good to see that the VA is formally moving forward to deliver on Secretary Wilkie’s March 3, 2020, reassurances that the Hot Springs campus will remain open to serve our veterans,” said Thune. “The fight to keep ‘The Veteran’s Town’ open began nearly 10 years ago when President Obama first announced plans to ‘realign’ the facility – a technical way of saying they wanted to close it. Since that time, I’ve fought hard to keep pressure on the VA so the facility remained open, knowing how much it means not just to our veterans, but to the community as a whole. For years, we told VA officials that once they visited Hot Springs, they would realize its true value and potential, which is why I was proud to help lead the effort that brought Secretary Wilkie to ‘The Veterans Town’ in March – a visit that I believe ultimately helped move this process along. This is good news, and I could not be more proud of the Hot Springs community for continuing to fight this long and tough battle. There’s still more work to be done, but I remain committed to South Dakota’s veterans.”

“The Hot Springs VA facility provides top-notch care to rural veterans across the region,” said Rounds. “While we’re still reviewing the action, this announcement is a positive step toward securing the campus as a place for veterans to receive these vital healthcare services in the years ahead. We also recognize that there is more work to be done. We’ll continue working with the VA to make sure it follows through on finalizing this decision to keep the Hot Springs VA campus open.”

“South Dakotans have been fighting for Hot Springs for a long time,” said Johnson. “After years of effort by the Hot Springs community and the South Dakota delegation, Secretary Wilkie assured us in March the VA isn’t going anywhere. It’s encouraging to see the VA is rescinding any efforts to reduce services and I know our veterans will be relieved after years of uncertainty. This is a positive step and I’m willing and ready to work with the VA to ensure the Hot Springs facility remains intact.”

For their assistance throughout the process over the past few years, Russell added his appreciation as well to the delegation.

“Thanks again to Senator John Thune, Senator Michael rounds, Representative Dusty Johnson and Governor Kristi Noem for all they have done the past eight years,” Russell said “We would especially like to thank the veterans and citizens of Hot Springs who have been behind the Save the VA Committee and worked many hours to help us produce an alternative to closure of the Hot Springs VA. May we now work together to get back many of those services we have lost.”