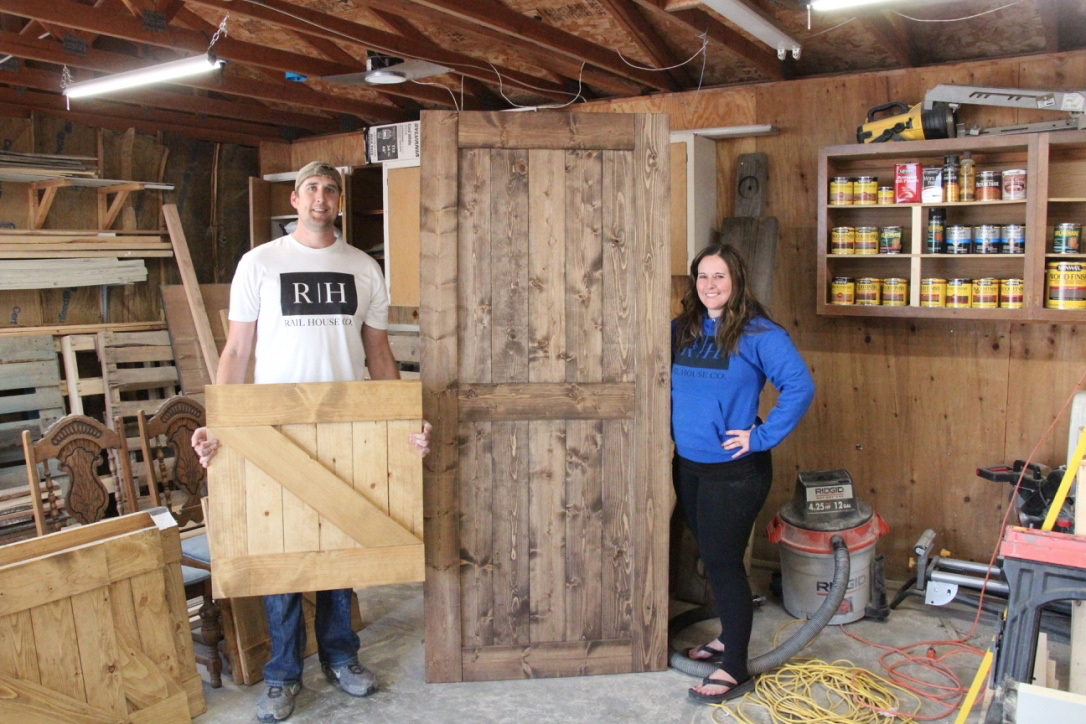 EDGEMONT – Geoff and Karena Benway decided to return to Edgemont, a move that has resulted in an even bigger decision to pursue an opportunity to start a family business. They are the owners of Rail House Co., LLC, which specializes in custom furniture, home décor, antique restoration, and remodeling. The name is derived from Geoff’s prior association with the railroad, which first began back in 2015.

“The community has shown great support towards our new business and we are happy to be building our business in this great town,” says Geoff.

Karena and Geoff both grew up in Gilbert, Ariz., but attended rival high schools with Karena on the cheerleading squad and Geoff a highly-prized basketball recruit who signed to play college basketball with the Kansas Jayhawks. His college basketball career ended on a bittersweet note, as the Jayhawks had reached the Final Four but then Benway shattered his ankle toward the end of the game. The couple knew of each other prior to college, but didn’t romantically connect until the end of their college careers and met on an occasion when Geoff returned to Arizona to visit his grandparents.

The couple originally moved to Edgemont five years ago when Geoff was hired as a conductor with BNSF. He was furloughed shortly thereafter and the couple returned to Arizona but in their short time in Fall River County, they developed an appreciation for the area that left them wanting an opportunity to return.

Another opportunity to work for the railroad surfaced in 2018 and the couple returned. In March, Benway was furloughed once again due to the coronavirus pandemic which motivated the couple to start a family business from scratch. Geoff developed a love for woodworking and craftsmanship that began at age 16. After his college basketball career ended, he began building his skills in remodeling and and wood-working while living in small towns in Utah where he came to live to be close to his mother.

Karena is heavily involved with the management and office side of things. She brings skills in the area of crafting and home décor. In addition to helping her husband with the construction business she anticipates opening her own business as a licensed massage therapist.

The Benways eventually hope to acquire a building downtown that will serve as a showroom and venue to sell home décor from that would act as something of a gathering place. They hope to host craft events that will allow community members of all ages to have opportunities to enhance their personal crafting skills while mingling with friends and family.

The couple are the parents of three children: Bryleigh who is 7, Murphy who is 4, and Carson who is 3. The Benways say they feel good about raising their children in a small-town setting where people in the community look out for other kids as well as their own.

To learn more about their new company visit them on Facebook.com/RailHouseCo/