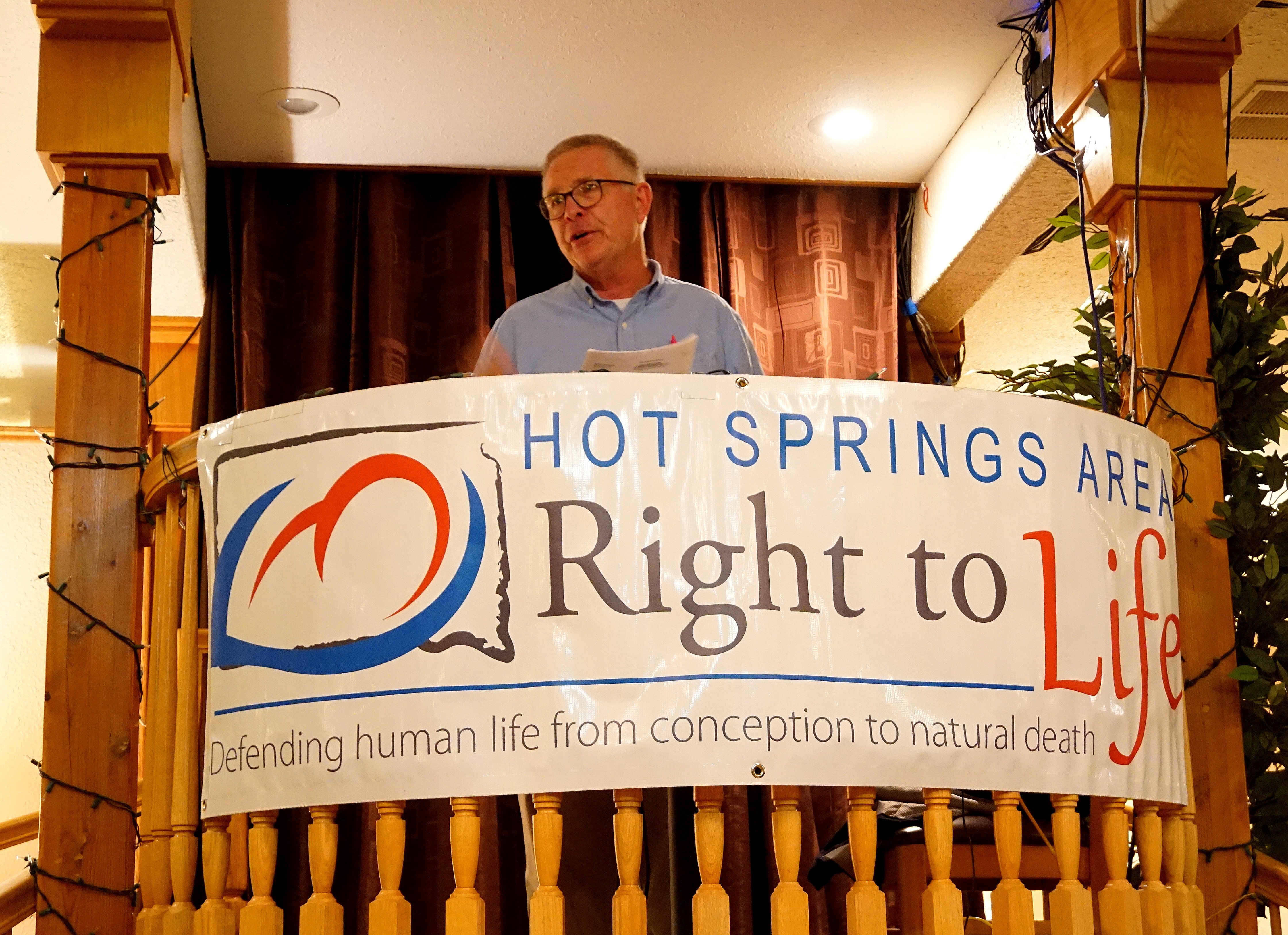 HOT SPRINGS – On Thursday, Sept. 10, the Hot Springs Area Right to Life (HSARTL) hosted South Dakota State University head football coach John Stiegelmeier as their guest speaker at the organization’s fall fundraising event entitled “Unbelievable.” The program was held at Woolly’s Grill in Hot Springs and was attended by an audience of about 50 people.

According to Beth Spitzer, Vice President of HSARTL, this is the first time the organization’s fall fundraiser has featured a guest speaker. “We usually have a singer or musical act, but this amazing opportunity presented itself and we are so happy to have Coach Stiegelmeier here tonight.”

HSARTL President Frank Birkholt spoke first and welcomed everyone to the event and gave a brief history of the non-profit organization. The Hot Springs chapter of South Dakota Right to Life began in January 2015 with the mission to “defend human life from conception to natural death.”

Dale Bartscher, who has been the Executive Director of South Dakota Right to Life for 18 months, spoke next and explained that South Dakota’s Right to Life affiliate has existed for 51 years with 40 local chapters throughout the state. Bartscher said that due to COVID-19, there has not been a single abortion in South Dakota in five months. Also, Bartscher said South Dakota was recently ranked the 10th most pro-life state in the country by Americans United for Life, a pro-life advocacy group based in Washington, D.C. Bartscher then introduced the main speaker for the evening, Coach Stiegelmeier.

While driving back from a recruiting trip in Wisconsin and Minnesota, Stiegelmeier said that the song “Mighty to Save” played on the radio which includes the lyrics “My Savior, He can move the mountains…” Stiegelmeier thought that the ability of the Lord to move mountains was unbelievable and began to make a list of his own things he considers unbelievable. Stiegelmeier’s unbelievable list includes: the athletic ability of those featured in Sportscenter’s Top 10 Plays, the amount of vehicles in Los Angeles traffic jams, the smell of homemade bread, how fast cottonwood trees grow, the immense size of cruise ships, sunrises and sunsets, and the birth of a child. Coach Stiegelmeier has four kids and four grandchildren.

In regards to what God believes is unbelievable, Stiegelmeier’s list consists of: hunger, food insecurity, and starvation, churches no longer being a sanctuary, the erosion of society’s morals, conformity to a worldly lifestyle, and the legality of abortion. “These kids were not allowed to see the unbelievable things in this world...one aborted baby is too many...life is precious,” Stiegelmeier said.

Stiegelmeier ended with, “Can the Lord move a mountain? The answer is yes...it is a lot easier to stop abortion...that would be unbelievable.”

The evening ended with the entire audience rising to their feet and singing the first verse of “God Bless America.”

Near the beginning of the evening, and after learning that this reporter was an SDSU alumni, Coach Stiegelmeier said, “I could tell, you have a wonderful glow about you.”