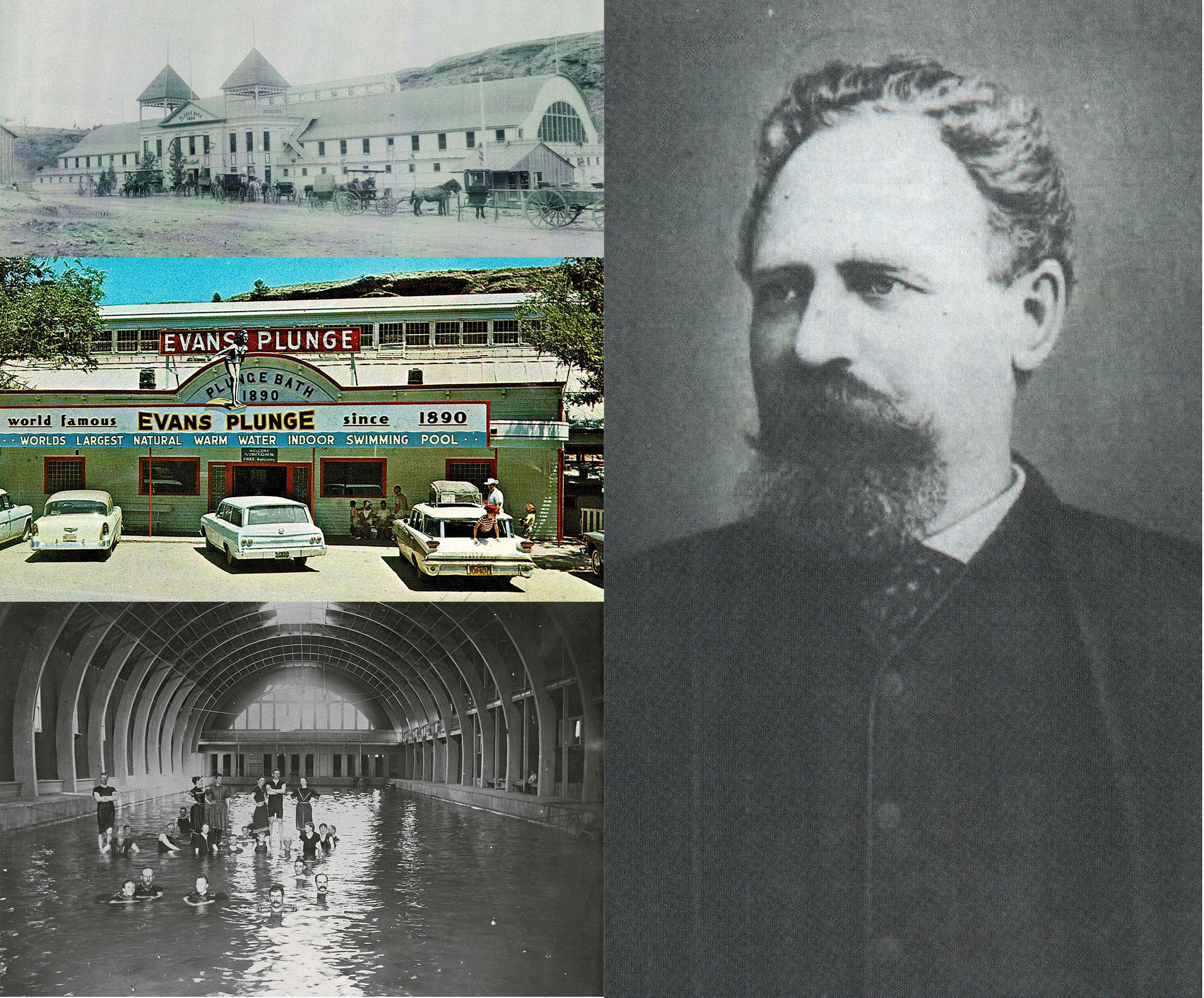 Editor’s Note: This story about Fred Evans and Evans Plunge is the next in an occasional series of stories by the Fall River County Herald-Star entitled NAMING WRITES, which are written about the local places of today, named for the people of yesterday.

HOT SPRINGS – It has been reported that for thousands of years, different Native American groups utilized the natural warm springs in and around the present-day site of Hot Springs. Legend tells us that the Cheyenne and Lakota once fought over the springs, but ultimately “agreed to allow the springs to be a health sanctuary to give their sick the benefit of the healing waters.” It is these same waters that attracted Fred Evans to the area in the 1880s, and is now the site of Evans Plunge.

Frederick Taft Evans was born in Parkman, Ohio, on Nov. 28, 1835. He left home at an early age, seeking adventure in the west. Evans worked as a logger in the woods of Wisconsin, rafted down the Mississippi River, freighted equipment with a team of oxen to Pikes Peak, Colo., drove a herd of wild horses from Walla Walla, Wash., east to the Missouri River, and started a ranch on the Platte River near Grand Island, Neb. It was in Nebraska where he met Theresa Beall, and the couple married in April 1863.

Fred sold his ranch in 1868 and moved the family to Iowa. There, he founded the town of Sloan, managed a general store, built the first street railway system in Sioux City, and served as the first president of the Northwestern National Bank. In the 1870s, Evans became excited about the reports of gold in the Black Hills. Seeing an opportunity, he quickly organized a transportation company that would haul supplies to the region.

Fred Evans’ first attempt at establishing a business in the Black Hills did not go well for him. In early 1875, Evans, now president of the Sioux City and Black Hills Transportation Company, agreed to outfit and transport the Gordon Party from Sioux City, Iowa, to the gold fields of the Black Hills. At this time in history, settlers were not allowed to enter the Hills under the provisions of the 1868 Treaty of Fort Laramie, which created the “Great Sioux Reservation” in what is now South Dakota from the Missouri River west to the Wyoming/Montana border. The wagon train made it as far west as the present-day site of Gordon, Neb. (which is how the town later received its name), where the party was intercepted by U.S. federal troops. Bounded by the legal obligation to keep gold seekers and settlers out of the Black Hills, the soldiers arrested leader John Gordon and “ordered the whole outfit pushed together in one great pile. They then set fire to it, burning wagons, food, and equipment.” This event, along with any other obstacles he encountered in his life, did not deter Evans. He hauled equipment (mostly gold mining supplies) into the northern Black Hills from 1876 into the mid-1880s. But fascinated by reports of warm spring waters to the south, Evans set out on a new adventure in what would later become the city of Hot Springs.

In the early 1880s, Fred Evans “came down from Deadwood to investigate the site and was so charmed with its beauty and convinced of its possibilities that he at once formed plans for its development.” In December 1882, the Custer Chronicle reported that Fred T. Evans, E.G. Dudley, R.D. Jennings, L.R. Graves, and A.S. Stewart formed the Dakota Hot Springs Company and surveyed the area where the warm springs were located. Evans platted the land, and named the town Minnekahta (“warm waters,” the town’s original name; changed to Hot Springs in 1886).

In 1890, Evans began construction on the first building over the springs, which was “the world’s largest enclosed natural warm-water swimming pool at the time.” Evans Plunge (known then as the Plunge Bath) officially opened in May of 1891 and the event was a grand affair. Special trains brought interested crowds down from the northern Hills and “a picnic atmosphere prevailed.” Mr. Evans let everyone bathe in the warm waters for free that day, and the local newspaper reported that the 200-foot-long and 70-foot-wide pool was filled with bathers from early morning on into the night. The Bower Family Band, later the subject of a 1968 Disney movie, came to Hot Springs that year and played at the Plunge all summer long.

Fred Evans, standing at 6’4’’ and built like a lumberjack from the north woods, was a man of an imposing nature. Badger Clark described him as a “bearded giant of a man.” Evans’ stature suited his personality, or vice versa. He never felt the need to carry a gun, and “when he made up his mind to do something, Fred Evans never allowed anything to swerve him from his purpose.” He was “never content to sit back,” possessed a great deal of natural enthusiasm and energy, and “nothing was too small or too big for him to undertake.” His vision was to turn the small canyon town of Hot Springs into a health resort for all those in need of the presumed healing properties of the warm waters.

Evans was Hot Springs’ number one promoter and wholeheartedly believed in what he was doing. Once characterized as a “public-spirited capitalist,” Evans opened a rock quarry, then built the original wooden Minnekahta Hotel, the subsequent sandstone Evans Hotel, the Minnekahta Block, the Fall River County Courthouse, and the town’s first water, light, and power plant, along with many other buildings. He also donated land and sandstone for local churches as well as the State Veteran’s Home. The unique architecture Evans used in his building designs was inspired by his time traveling abroad, particularly in Bavaria, where he became fascinated with castles.

Fred Evans continued to advertise Hot Springs to the world as “a nationwide center for tourists coming to bathe or ill persons coming to take advantage of the medicinal qualities of the warm waters.” Throughout the 1890s and early 1900s, stories were told about the miraculous healing effects of the mineral waters. Examples include one “very large man” who reportedly lost 24 pounds during his four-day visit to the Plunge and a woman who at first could barely walk, then ran out the door without her cane after her swim.

Evans remained an energetic citizen of Hot Springs until his death. He served as mayor from 1894-1896, converted the street lights in town from kerosene to electric, advocated for the first bank of Hot Springs, and was an active freemason and Shriner. His wife Theresa helped establish the town’s first library.

Because of his personality and many business ventures, he sometimes caused controversy. Court records show he was sued numerous times for various amounts of money, but also for more “interesting” problems. For example, in 1895, “S. Loudenback charged Fred Evans with maintaining a nuisance in keeping a cow yard and pig pen in too close proximity to a public street.” Evans paid the fine.

Fred Evens died on Oct. 11, 1902, at age 66 and is buried in Evergreen Cemetery here in Hot Springs. Reverend Morris presided over his funeral service and the Weekly Star noted: “All that was mortal of the noble-hearted pioneer of the Hills, the proud inspirer of large enterprises and public-spirited citizen of Hot Springs, was laid at rest just as the beautiful autumn sun was sinking over the hill-top.”

Since Fred Evans’ death, the Plunge has changed ownership many times, endured hardships, and experienced many changes. Numerous floods have caused damage to the pool, with the most devastating occurring in June of 1947. In 1962, two brothers, Tom and Chick Abourezk, bought the Plunge and constructed a new building over the springs. In 1978, the Plunge was sold to a group of Hot Springs businessmen. In the 1980s and 90s, an outdoor swimming pool was added along with waterslides and a new health club and spa.

Today, Evans Plunge is owned by the City of Hot Springs (since 2013). The pool is 200 x 50 ft. and up to 5 ft. deep with a volume of 500,000 gallons of water. It is fed by 13 springs and the water remains at a temperature of 87 degrees. Although no longer considered a place to cure ailments as Fred Evans once advertised, the warm waters of the Plunge “still invites visitors for rejuvenation, refreshment, relaxation, and recreation.” This year, Evans Plunge is celebrating 130 years of operation.

Thank you to Sara Casper at the State Archives in Pierre and Kris Hanson at Evans Plunge for their contributions to this story. Information and photos for this article obtained from: the books “Early Hot Springs” and “When Hot Springs was a Pup,” the City of Hot Springs, newspaper archives, and the Helen Magee Heritage Room.