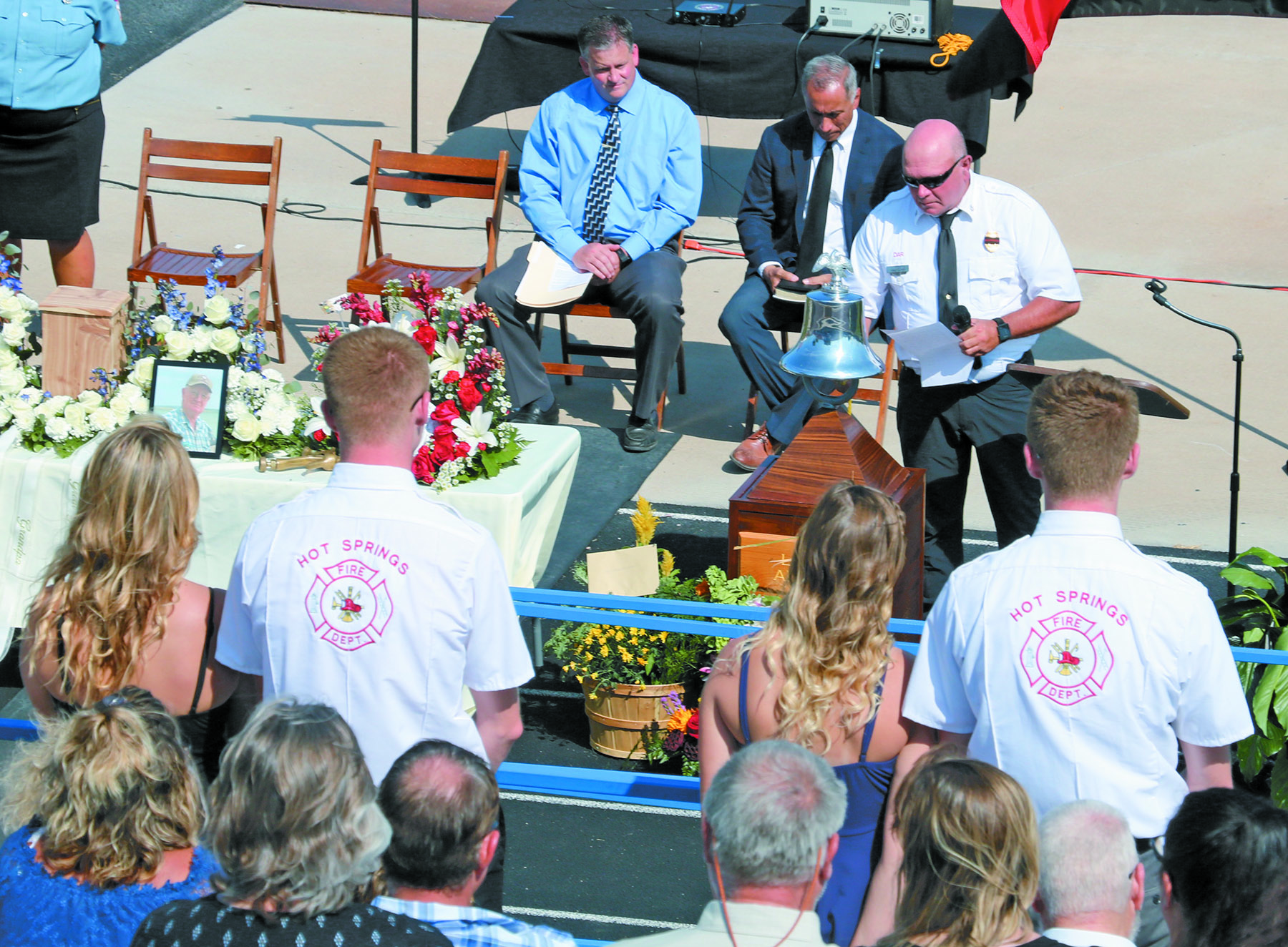 With his firefighter grandsons Seth and Riley standing and looking on, Fire Chief Dar Coy rings the bell to signal Marv Stevens’ final call as part of the Hot Springs Volunteer Fire Department for the past 60 years. Also pictured seated is family friend Eric Glenn who performed the eulogy during Steven’s funeral on Aug. 29, along with Pastor Matt Lim.

HOT SPRINGS – During the funeral services for Marv Stevens held outdoors at Woodward Field this past Saturday, Aug. 29, Pastor Matt Lim noted that when one dies, they leave behind three things: their earthly possessions, their loved ones and the memories of their life.

For someone whose earthly possessions included a plumbing business he operated for 54 years, and who had enough friends and family to literally fill a football stadium, and whose combined memories of him could figuratively fill another stadium – Marv “ Grandpa Skip” Stevens likely left behind more than most.

Approximately 275 people attended his funeral in person, with many more who left cards and well wishes prior to the ceremony but did not stay due to social-distancing concerns regarding coronavirus. Countless others paid their respects after the funeral to Stevens, who was a 60-year member of the Hot Springs Volunteer Fire Department, as they observed the many-blocks-long parade of fire trucks go through town on their way to Evergreen Cemetery for the committal.

After being diagnosed with COVID-19 on Aug. 5, Stevens became Hot Springs’ first, and so far only, confirmed death from the disease, which thus far has killed nearly 170 other South Dakotans. He died at the age of 83 in Monument Health’s Rapid City Hospital on Aug. 23, 2020, surrounded in person by his three children – Deb, Jim and Alan – but also by dozens of photos on the wall of his other family members, which his daughter printed and had hung there by healthcare workers.

Marv’s youngest son Alan, who was also diagnosed with COVID-19 in August along with his wife Michelle, said one of the most horrible things about having a loved-one hospitalized with the disease is not being able to see them during their ordeal.

For 17 days – from when he was diagnosed and admitted until hours before his death – his children could only speak to him via telephone or video conference using an app called Jitsi Meet, which the nurses would help Marv use with an iPad. Deb laughed when she recently recalled the first time her dad used the Jitsi app and saw her face on the screen.

“He seemed kind of surprised by the technology as he smiled and looked at the nurse and said, ‘That’s my daughter!” she said.

Deb described the situation as “gut-wrenching” of not being able to be present when doctors visited with her father about their treatment and prognosis. Both Alan and Deb said the overall communication with healthcare providers was very stifled and frustrating, but in some ways understandable considering all that the hospitals were dealing with as well. Nonetheless, Alan said it was heartbreaking to know how isolated his dad must have felt while being the hospital for his final days.

Throughout the ordeal of being apart from their father, the Stevens family tried to stay optimistic. Deb said her hope reached a high three days prior to this death, on a Thursday, when doctors lowered his oxygen from 100 percent down to 85 percent and then 80 percent.

But on Sunday morning, she got a call from the hospital at her Box Elder home at 6:34 a.m. that Marv needed his children at his bedside. By 7:01 a.m, she said she was there with him while her brothers were not far behind as they drove up from their homes in Hot Springs.

Deb said they were each required to wear something she said looked like a space suit, but are called PAPR’s which stands for Powered Air Purifying Respirators.

Prior to her brothers arriving, Deb, who is strong with her faith in God, said she spoke to her Dad about his faith and whether or not he was ready to be with God. She said that her dad told her he believed in God and was ready to rejoin his wife Betty, who died in 2008.

Shortly after, Deb was joined at her father’s bedside by her brothers Jim and Alan, who were also wearing the PAPR’s.

Jim, who, for the past 43 years has been working almost daily with his dad in the plumbing shop – which also doubled as a morning coffee and afterwork beer hangout – said he it was very difficult for him to see his dad laying in the hospital bed and not being able to help him. He however knew that his dad had been missing his mom more and more lately, and wanted to be with her again.

After not being able to be present with their dad for 17 days, the three siblings were with him for three hours and said their good-byes. He said he was done fighting.

Alan recalled and appreciated having that opportunity to say good-bye, which he said “you only get one shot at it, so you better make it right.”

In his final hours, the three siblings said their dad was coherent and ready for what lay ahead. During the funeral service, Pastor Lim said Deb told him that her dad once made the comment, “I’m 83 years old. Something’s going to get me sooner or later and I don’t want to live forever.”

Following Marv’s funeral on Saturday, a gathering was held at the American Legion, which was a place Marv often frequented when he wasn’t at the plumbing shop, at a local sporting event or at home with his many family members.

During that gathering, many memories were shared about Marv’s life, which was spent almost entirely in Hot Springs.

Alan said the stories he heard often revolved around what a good listener his dad was, and how he always told you the truth – whether you wanted to hear it or not. “He was very respected, but he didn’t demand that respect. He earned it,” Alan said.

Jim said people spoke to him about how his dad “was there” – meaning he was always consistently where he said he was going to be. “Maybe not always on time, but he was there,” he laughed.

Deb spoke of how her dad always had a smile or a joke. “He was authentic. He was consistent, always caring and loved everyone,” she said, while adding that Hot Springs won’t be the same without him.

“He didn’t look at what someone had or didn’t have. He looked at who they were,” Deb added. “Even if it was the first time meeting him, you left knowing him pretty well. So many people who loved him and he lived a consistent friendly life for 83 years.”