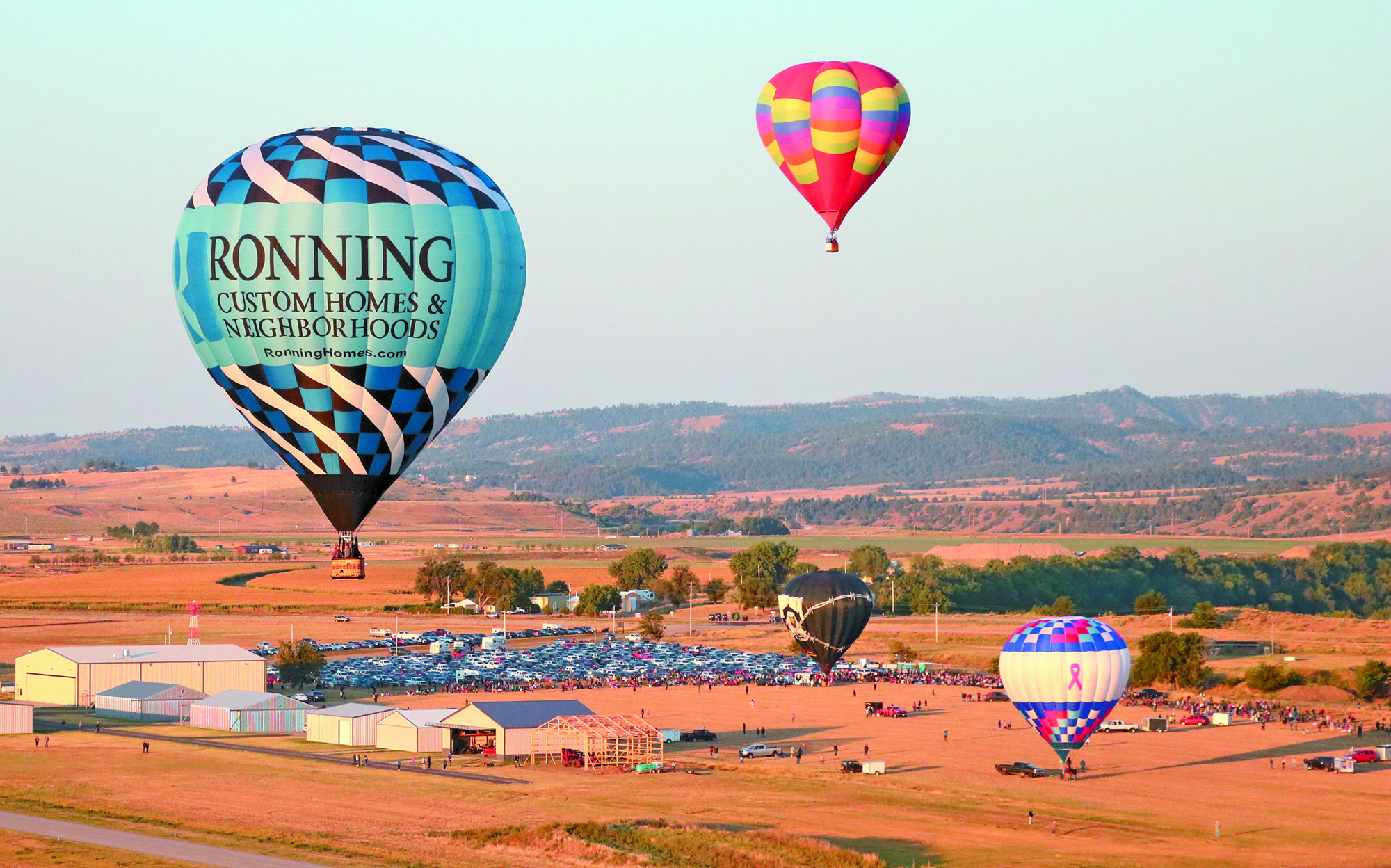 It’s estimated that a combined 2,000 people attended Saturday morning’s hot air balloon launch and Saturday night’s candlestick glow, both held at the Hot Springs Municipal Airport. For more photos from the event, turn to page B8.

By Brett Nachtigall and Charity Maness

HOT SPRINGS – With near-ideal weather conditions in the morning, an estimated 2,000 people attended this past weekend’s 5th annual Fall River Hot Air Balloon Festival, which included a Saturday morning launch of well over a dozen balloons from the Hot Springs Municipal Airport.

The planned Night Glow on Saturday night – where the balloon’s envelope is filled with air and then made to glow by firing the balloon’s burner – was changed to the candlestick glow (without the envelope filled up) due to high winds. The planned Sunday morning balloon launch was also canceled due to the potential of high winds and dangerous flying conditions.

In a statement placed on the event’s Facebook page, Petra Wilson, who serves as the event’s balloonmeister, said, “Our hot air balloon Pilots were looking forward to doing an exciting night glow, however when the winds did not die down, for everyone’s safety, the decision was made to do a candlestick glow instead. There were a few pilots who chose not to do the candlestick glow because their equipment would not tolerate the type of winds we saw. This is always a difficult decision because our Pilots want to put on the best possible show, but we appreciate their recognition of the importance of safety to help insure further successful years of the Fall River Hot Air Balloon Festival.”

Regarding the canceled Sunday morning launch, Wilson said that it was apparent the night before that weather would likely not be favorable again, therefore they decided to cancel due to the low-level wind shears and high winds predicted during the flight window.

“As you know, this event is always weather permitting,” Wilson said.

“We will do everything we can to put on a great show, but at the end of the day, safety is our first priority,” Wilson added.

Regardless of how the planned two-day event finished, it certainly started out well with high levels of enthusiasm Saturday morning from spectators, as well as from organizers, including Hot Springs Area Chamber of Commerce Executive Director Olivia Mears.

“We are extremely grateful for everyone who volunteered their time this year, and we want to thank everyone who came out to attend and support the festival,” Mears said, “While COVID-19 meant that we had to scale back this year, the pilots were impressed with the Festival and the support of the community, and we hope to grow the festival and have an even bigger and better festival next year, including bringing back all the activities we were unable to have this year.”

One of the many highlights of this year’s hot air balloon festival was the presence of the POW/MIA Freedom Flight balloon, which was making its second straight appearance in Hot Springs’s 5th annual festival.

Sinnen served in the United States Navy from 1965 to 1968 and has been piloting balloons for 37 years.

Luke Cesnik served in the Air Force 1970 through 1973. His career path led him to the computer industry yet he was bit by the hot air balloon bug in 1989 and has never looked back. As a pilot for the Freedom Flight Luke, as well as the other pilots have had the opportunity to travel the world.

“We have been to France, Germany, Belgium, 48 states and Canada,” said Luke with pride,” all to spread the word, educate and inform people those who have paid the ultimate sacrifice and those who have yet to return home; we have not forgotten. This message is near and dear to my heart.”

For both Sinnen and Cesnik the most rewarding yet extremely emotional part of being a volunteer for Freedom Flight, Inc. is the human contact with those who have lost a service member.

“Some come up to you with tears in their eyes, yet don’t say a word,” said Cesnik, “but as soon as we assure them we understand, the stories they tell are heart wrenching; stories of love lost, families torn apart. This is why we do this. We do this for those families. We want them to know that we will never forget and that our sole purpose is to spread the message so that they will never be forgotten.”

As aforementioned by Chamber Director Olivia Mears, many considerations were made regarding even holding this year’s event due to the COVID-19 public health crisis, which has canceled many other Hot Springs area events this summer, including the Arts & Crafts Festival and the Fall River County Fair.

“Among the biggest factors in determining moving forward with the Festival in a pandemic were that even with the historic attendance numbers from previous years, aerial photography from previous festivals indicated to us that the field at the airport was not being fully utilized,” said Chamber of Commerce Media Coordinator Justin Gausman.

“As long as attendance was similar to the last couple years, we could encourage attendees to spread out further down the field rather than congregate near the gate area and allow plenty of space between families, Gausman said. “We had no tents or areas this year that required people to be in close proximity to others, and we had help from volunteers at the gate to not only encourage those who did choose to go on the field to spread out, but also to remind them not to approach the balloons, pilots and crew this year. And of course, folks could choose to view the events from their vehicles altogether, removing any concern about being in contact with others.”

“Once the balloons are in the air, and you’re taking in the spectacle of it all, it really doesn’t make a huge difference whether you were on the field or several hundred feet back. We’re fortunate that this happened at this point in the growth of the festival - if the expected attendance had been even twice as large, it might not have been as logistically possible to follow through and trust that we could offer the same measures of safety.”

The 2021 dates for the sixth annual Fall River Hot Air Balloon Festival are set for August 26-28.