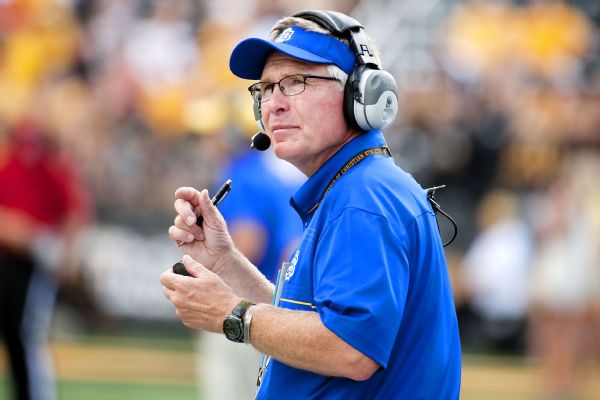 Coach Stiegelmeier , age 63, is the winningest football coach in the history of SDSU, with a 166-105 record over 23 seasons. Since the Jackrabbit program made the leap from Division II to the ranks of the Football Championship Subdivision (formerly Division I-AA) 16 years ago, he has posted 14 winning seasons during that time and made SDSU a yearly contender within the Missouri Valley Football Conference.

Aside from coaching, the Selby, S.D., native is active in the Fellowship of Christian Athletes, serving on the state board of directors and as the organization’s SDSU faculty representative.

According to Beth Spitzer with HSARL, Stiegelmeier is a Christian and pro-life. He is married, has four children and four grandchildren.

“He spoke at a Lutherans for Life event in Brookings which is how I heard he was available for speaking engagements,” Spitzer said. “I reached out to him about speaking at our Fall Fundraiser and it just so happened he had a bye in his football schedule and we could make it happen.”

Spitzer said Stiegelmeier’s talk comes from a Laura Story song “Mighty to Save”.

Spitzer also said that Dale Bartscher, Executive Director of South Dakota Right to Life, will be in attendance as well.

The event next Thursday is free to attend, but donations will be accepted. Appetizers will also be served.