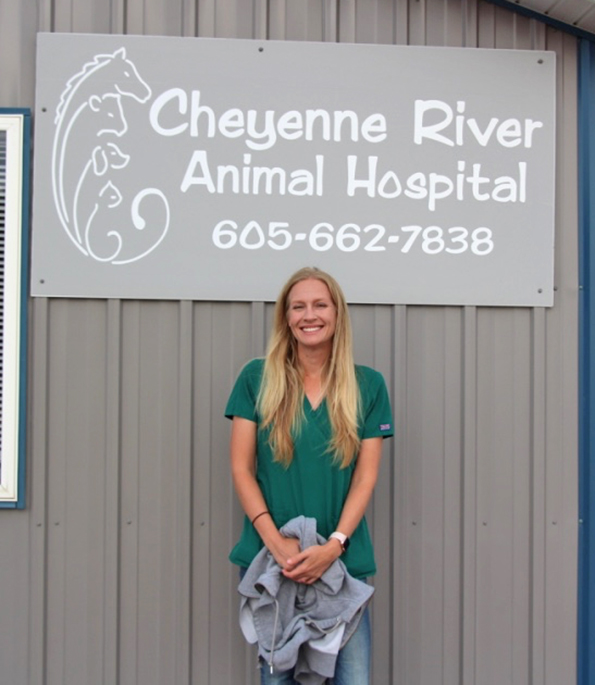 EDGEMONT – Three months ago, Cheyenne River Animal Hospital in Edgemont welcomed a fourth veterinarian to its staff with the addition of Dr. Annamarie Eick’s. Her resume includes a great deal of cattle and equine experience, something in great demand at a rural clinic in the middle of ranching country. With four vets now on staff, the clinic hopes to be able to always have a vet present at the clinic during business hours.

Eick’s roots are in Southern California, a place she tends to agree has little else in common with Edgemont aside from its rugged appearance and hot summers. Eick was born and raised in San Diego, where both of her grandfathers were stationed in the military (one Army and one Navy) and that is how her family came to that area.

She says it took her a little longer than most people to decide to become a vet because the experience that first steered her into working with animals didn’t involve house pets. She knew she wanted to work with animals after growing up around beef cattle and horses on her uncle’s hobby ranch. She started out at the University of California-Davis in Animal Science & Management, a dual business and animal science degree program.

After graduating, she got a job working in an equine hospital in San Diego. Due to the expense of living in the San Diego area, she also worked second jobs – one at a law firm and the other at a refrigeration company. She decided to apply for vet school, and ended up choosing to attend the University of Minnesota where she graduated in May with a Doctorate in Veterinary Medicine degree.

With her husband Tim being stationed in the Navy at San Diego, she had motivation, in addition to her family ties, to go back to that area after graduating from vet school, but both she and her husband had the desire to live in a more rural area with a lower population density.

Back in October of last year, she completed an internship program with Cheyenne River which gave her an initial opportunity to survey the landscape of southwestern South Dakota. She came back once more as an intern this past March and was very impressed with a practice that had three highly competent female vets already on staff. She found that the clinic offered a great work environment with a good dynamic among the staff, which is always striving to practice the best medicine. Eick also appreciates the small town atmosphere and the close relationships that it fosters.

In her personal time, Eick loves to run and has participated in half-marathons. She also enjoys the rugged hiking the area has to offer. Her husband is still in the Navy back in California but hopes to join her in Edgemont eventually. The couple share a dog that resides with Tim and she has a horse here in Edgemont.