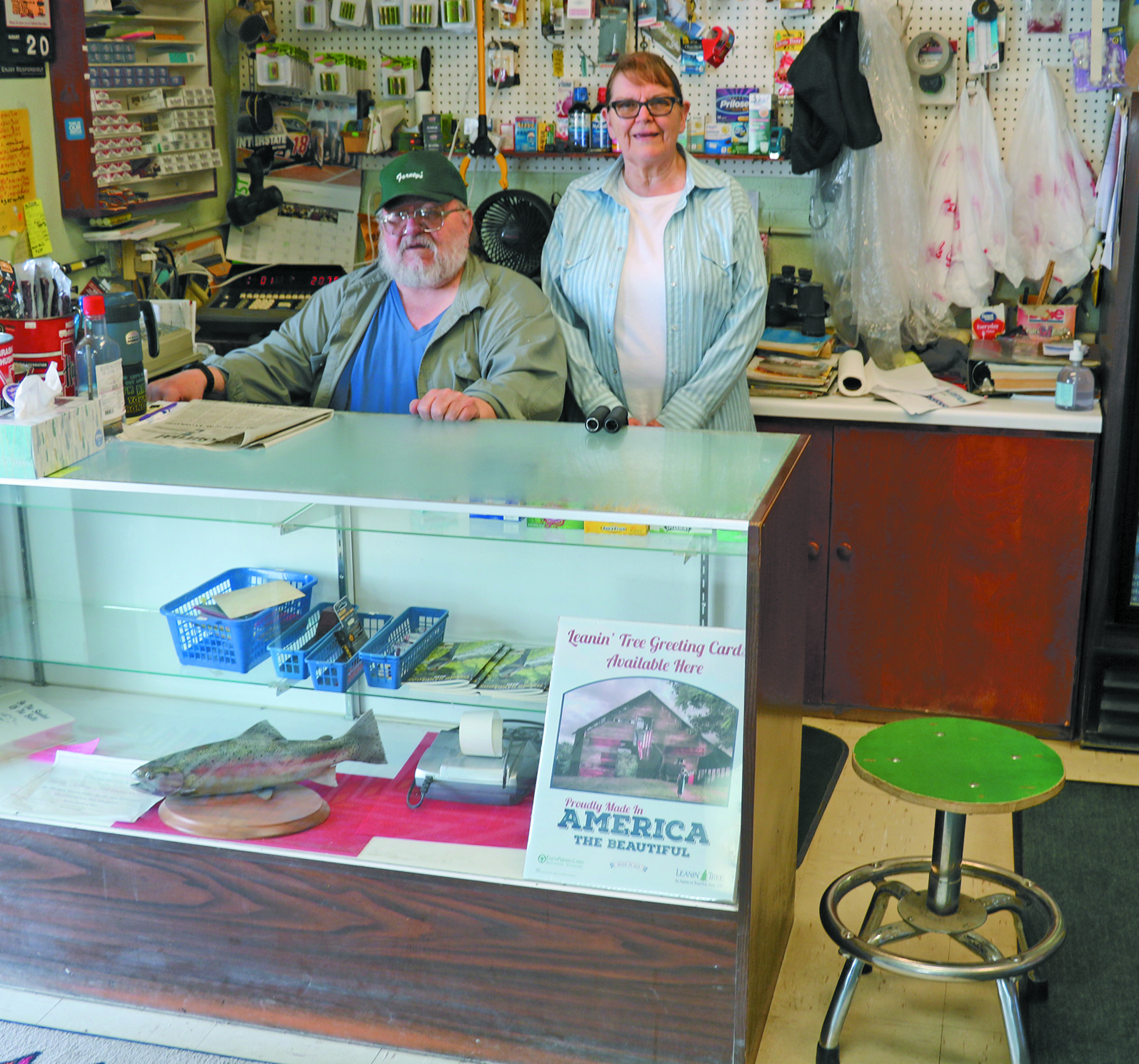 Larry Forney and his wife Twila pose behind the counter of Forney’s in Oelrichs, which is a business the family has owned since Aug. 24, 1970. While no one is seated there now, the green stool in the lower right portion of this photo is quite often occupied by one of Forney's regular customers when they stop in for a snack and to get caught up on the happenings of the day.

OELRICHS – As a 7th grader growing up in his hometown of Oelrichs, one of Larry Forney’s first jobs in the early 1960s was as an attendant at the local service station, operated at that time by Ray Milligan. Larry’s days at the station then were spent fixing tires, washing windows and pumping gas.

While you won’t see him doing those types of duties much anymore, you will still find him at that same  service station seven days a week. And on Sunday, Aug. 24, you would have also found him celebrating his 50th anniversary of owning and operating that same station, known to all area residents and travelers simply as “Forney’s.”

As one would expect, a lot has changed at the Oelrichs station in the past 50 years. Recently, Larry and his wife Twila – who have been married for 53 years and raised a daughter Jennifer and son Eric – reminisced about the last half century of operating a business in the small Fall River County community.

In the very early days, even before Larry took over operations of the gas station, he recalled spending most of his day pumping full service gas and fixing tire after tire, after tire.

When he first began working there at a young age, he recalled barely being able to reach the gas nozzle to fill people’s tanks.  Each year, around the Sturgis motorcycle rally time, he remembered standing by the pumps and sometimes filling up 30 to 40 bikes in a row, as they would roll in while traveling in very large and loud groups. Those fill-ups would often be for only one gallon at a time, which garnered about 20 or 30 cents each.

Car fill-ups in those days however were usually for a lot more gallons than they are today. Larry said he recalls the average gas purchase being about 16 gallons during the early days of him owning the station, while today it’s only about six gallons, as tanks are now smaller and can go much further distances.

After working for Milligan, along with some other station owners/operators during the 1960s, Larry had the opportunity to take over operations and purchase the business in 1970. At that time, he said Standard Oil had the lease of the building from Milligan and had someone else operating the store for them.

In August of 1970, Larry took over officially by leasing the business from Standard Oil with a portion of his monthly rent going towards the ultimate purchase of the operation. Dewey Trent was a jobber for the Standard Oil at the time, which is where Larry was purchasing his fuel. Over time, Trent became independent and Larry began purchasing his fuel from him directly.

Back then, the building was much smaller and featured a single stall garage which was located where the walk-in front entrance is now. Larry ran the business that way for more than 30 years and employed many members of the community, as well as his family, including a few of his eight brothers who also all grew up in Oelrichs. His older brother Bill was his first full-time employee and did all of the mechanic work at the shop for many years.

Larry wanted to expand his operation, which he finally did in 2003 when he secured an Small Business loan for $300,000 – which he said he finally paid off not long ago.

The expansion in 2003 was quite an undertaking and involved remodeling the entire inside of the building while also adding on a large repair garage. Local resident Kenny Pourier was the general contractor on the project.

Once the large garage was added on, their mechanical services were then also expanded. Larry said his son Eric, after having served 20 years in the Air Force, came back to Oelrichs and did all of the shop’s service work for a few years. That part of the business was however shut down a couple of years ago, as Eric took over operations of a couple other local businesses, including the Black Hills Saloon downtown.

With the expanded inside space, and with less fuel being sold and tires needing fixed during the time of the remodel in 2003, Forney’s added many more retail and convenience items inside the store, including groceries. Today, you’ll find a little bit of everything from beer and ice, to Velveeta and spaghetti sauce, to milk and eggs, to frozen pizza and chips, to soup and crackers, to toilet paper and and garbage bags.

Larry said he has stocked the store based on what people have asked him to carry, as a service and convenience to his fellow Oelrichs area residents. Other services he has offered in the past has included hunting and fishing licenses, which however are no longer available due to people’s tendencies to now get them online. He however is still the home for Shipper’s Agreements for area ranchers, who need that service to document the transport of animals.

As one of the few businesses still operating in the town of about 130 people, Forney’s serves as the gathering spot for local residents hang out. While there is a round table positioned inside the store that faces a television mounted on the wall, likely the busiest place in the building is the short stool positioned at the end of the front counter.

Larry said at one time the stool featured a padded cushion, but it has long since wore out. The cushion was replaced with a hard piece of wood, which Larry joked was so that his patrons don’t get too comfortable and wear out their welcome.

Over his 50 years of operating Forney’s, Larry has rarely missed a day of work, which includes business hours that run seven days per week, from 7 a.m to 7 p.m.

“I’ve found that when I do take a day off, it just means twice as much work the next day,” Larry said.

He and his wife Twila, who had a 23 year career with the U.S. Post Office before retiring in 2016, say they are most proud of the 35 to 40 local kids they somewhat helped to raise as seasonal employees since the 1970s.

As one recent patron pointed out, and said he appreciated seeing, was how Larry always required his employees to count back change to the customers – a skill which has almost been lost to most youth in this day and age.

Larry said he’s probably had to replace the counter till about three times, but one button that has never been wore out is the Amount/Tender button, due to he and his employees’ ability to do the math and then count back the change as a double-check to ensure it’s correct.

And perhaps not unlike that button on his till, Larry is not wore out either. Despite suffering from lymphedema which makes it difficult for him to get around, Larry said he plans to remain behind the counter of his business for a while longer.