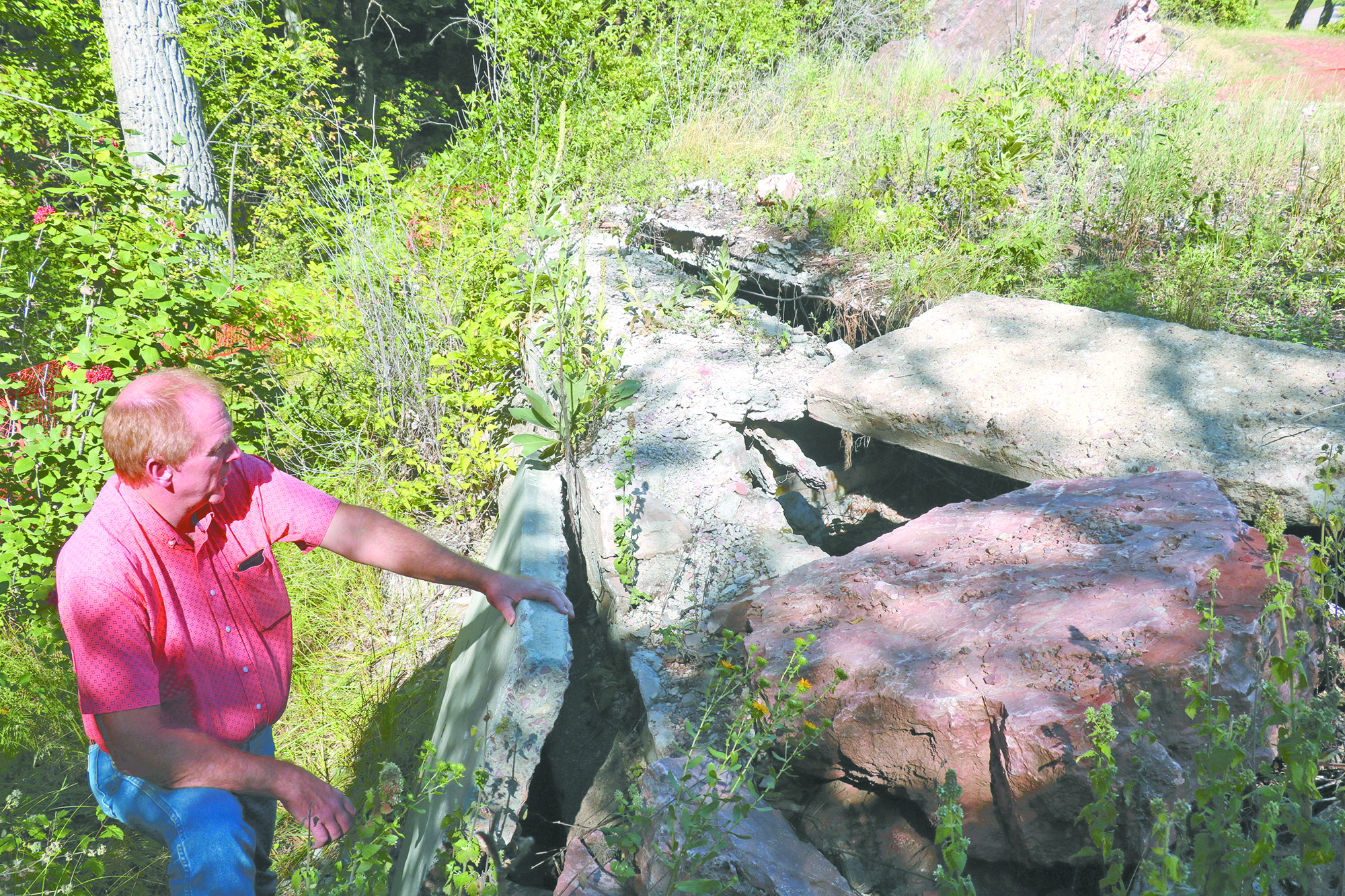 Hot Springs City Engineer Tracy Bastian stands in front of the fractured opening of the Mammoth Spring Box located in lower Chautauqua Park. The opening is currently covered by a large piece of concrete, which the city placed there to discourage people from climbing inside due to safety concerns.

The former Mammoth Spring Box in lower Chautauqua Park, which once served as the pump station for the city’s water supply more than 100 years ago, has not been functional since the late 1920s, according to documents at City Hall.

HOT SPRINGS – Citing safety concerns due to a failing roof, the City of Hot Springs is planning to demolish an old “spring box,” or what some people refer to as a “collection vault,” in Lower Chautauqua Park, which was abandoned by the city about 100 years ago. The structure served as one of the first pump stations for the city’s water supply, but has not been in use since the 1920s.

Many area residents may not even know the spring box existed, but to passers-by traveling on Hot Brook Canyon Road, it is the sandstone/mortar structure near the park’s parking area that stands only about two to three feet feet high and has been surrounded by a orange snow fence for several months. The plastic fence was put in place to keep people out of the area for safety reasons.

There is a fractured opening on the south side of the vault that is large enough to crawl into. But due to a failing roof, sharp rocks and sitting water inside that is a few feet deep, it can also be a dangerous place, according to City Administrator John Gregory.

Despite being asked by at least one resident of the community to restore the non-functional sandstone structure, the plan is to push in the sides with heavy equipment and eliminate the hazard completely, in the next few weeks.

Hot Springs City Engineer Tracy Bastian noted that while it is a historic structure, there is not much else about it – visually or functionally – that makes it worth investing potentially thousands of dollars by the city to restore.

Bastian said the “spring box” was built over what was once an active spring, known as Mammoth Spring. The city abandoned it in the 1920s and moved their pump station further up Hot Brook canyon, to what is now the Hot Brook Pump Station. While there is currently cool water that sits in the bottom of the old spring box, along with a bog of moist ground nearby, there is not any significant water being produced by the spring.

There are some very active springs however nearby, including the Veterans Administration Spring, which has been called by some the “new” Mammoth Spring. Its pump house is located about 600 feet closer to town.

According to historical documents at City Hall, there are also the Lakota and Evans Springs nearby, which are located where Hot Brook Creek and Cold Brook Creek converge to form Fall River behind the Evans Plunge. The Evans Spring is what is believed to feed Evans Plunge, while the Lakota Spring is likely one of the main sources of water that feeds Fall River. Bastian noted however that the area is very “springy” with multiple sources of warm water in the area.

The City of Hot Springs currently utilizes two different pump stations to supply the city with its water. The aforementioned Hot Brook Pump Station feeds a 2 million gallon storage tank northwest of the State Home, while the Evans Pump Station – which Bastian said is actually a well – feeds a 1 million gallon storage tank at the top of Happy Hollow.

The old Mammoth Spring Box is approximately 20 feet in diameter, with an inside that is about five feet deep, with a gravel bottom, Bastian said.

Once it is pushed it, Bastian said the city will monitor the site to ensure it is stable before taking down the fence and allowing people back into the area.

An exact date of when the demolish is set to take place has not been set. According to comments made by Mayor Bob Nelson at the Hot Springs City Council meeting on Monday night, Aug. 17, the fate of the spring box will continue to be discussed in the Parks, Recreation, Beautification and Cultural Development Committee, which is chaired by Wes Grimes.