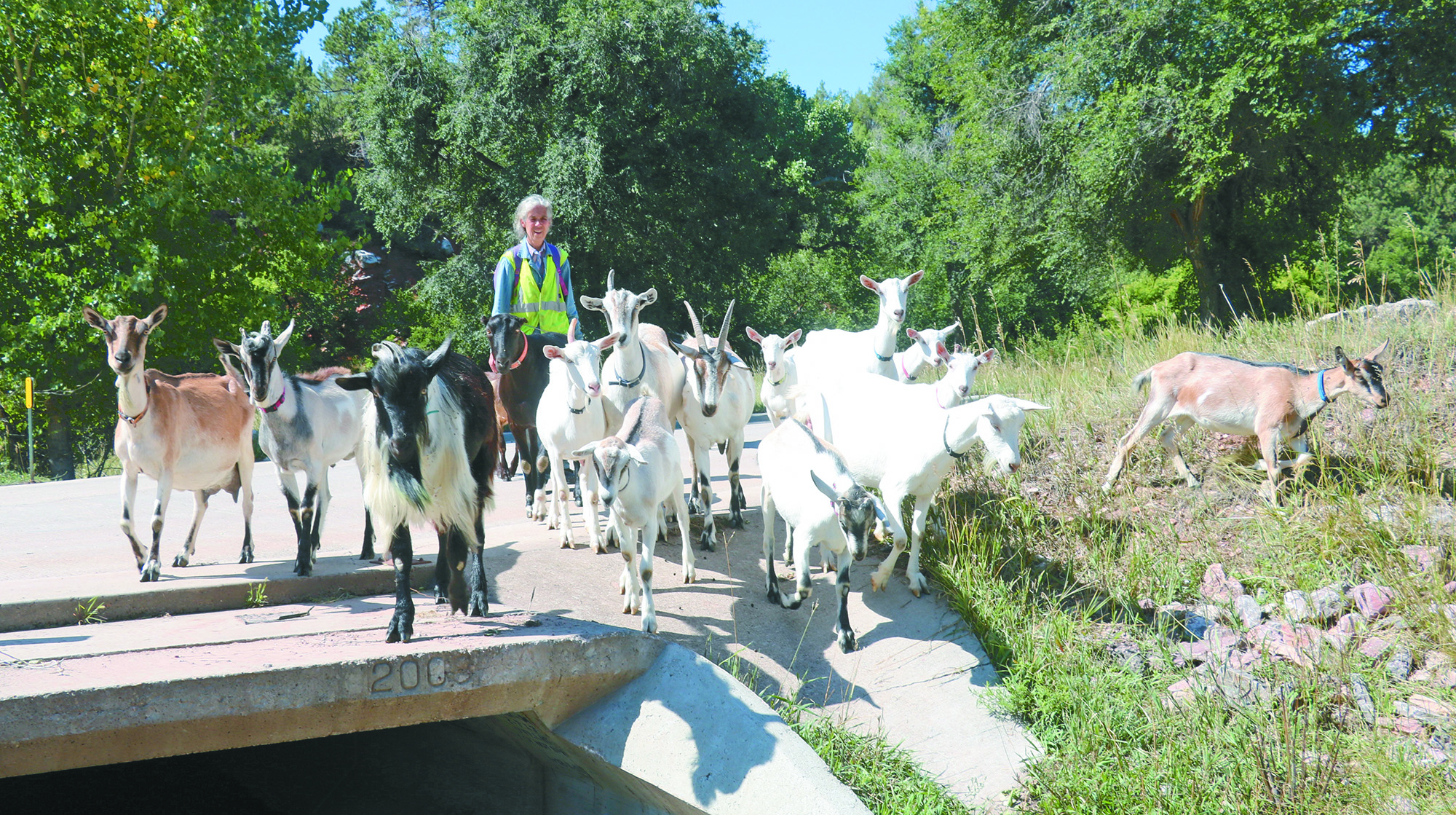 May Wichers walks her goats across Cold Brook Avenue on their way home after a morning of browsing the vegetation along Fall River, north of Evans Plunge. To get to-and-from their destinations each morning, Wichers utilizes the dry Cold Brook flood channel that winds through the neighborhood on the north end of Hot Springs.

HOT SPRINGS – If you frequent the north side of town near Cold Brook Avenue, there’s a good chance you’ve seen May Wichers and her 17 goats.

It’s not a sight you necessarily expect to see inside the city limits of a Black Hills community like Hot Springs, but it’s something that has been occurring pretty much daily for about a year-and-a-half.

Wichers, who lives on West Badger Clark Road, near the entrance to Simon Contractors (formerly Hills Materials), began herding her goats through the city parks and watershed areas as part of a Goat Pilot Program. The purpose of the cooperative program, which began under the supervision of former City Administrator Kim Barbieri and was passed along to Parks Committee Chair David Burris, was to introduce the use of goats in managing natural and noxious weeds.

And now almost two years into the effort, both Burris and Wichers agree that it has been a mutually beneficial endeavor.

For Wichers, even though she is not paid by the city for her services, it allows her and her goats to get daily exercise, not to mention nourishment for her animals. Wichers said goats are the ideal animal for such an effort because they are mobile on all terrain and move easily on steep slopes and in heavily vegetated areas.

Wichers also said that goats have special enzymes in their stomachs that allow them to eat plants that are both poisonous to other animals, as well as considered noxious by the city and federal agencies. In fact, they prefer to eat weeds instead of grass, Wichers said.

Burris agreed and pointed to the fact that goats are browsers and take bites of things and then move on, as opposed to an animal like a sheep which will stay in one area and chew grass down to its roots. He said the fact that a goat will bite the top off a weed helps to ensure that it cannot repopulate with seeds, which greatly limits the need for the city to use chemicals to reduce the amount of weeds in an area.

This is an advantage that not only saves the city money, but is also a good way for the city to work responsibly.

Wichers said an additional benefit to having the goats graze on city property is that they can eat things up to six feet high, which works well for fire control as they consume ladder fuels which can allow flames to spread upward on trees.

Wichers and her dog Lucy have a few routes in which they take the goats, but the main focus is to have them browse the expanded Freedom Trail near Chautauqua Park, the School Street Park along Cold Brook Avenue and the Fall River area north of Evans Plunge. To avoid having her goats infringe on private property between their home and those locations, Wichers utilizes the flood channel that winds through the neighborhood between Badger Clark Road and Cold Brook Avenue.

When they come to a street crossing, you often see how the goats have been conditioned to stop before entering the roadway as they gather around Wichers and await a treat of “cake,” which she carries in her pockets for them.

Goats are natural followers that stay together and rarely wander off, Wichers said. Her dog Lucy always tags along on their walks, with the primary purpose of protection for the goats – in case a wandering or aggressive dog or predator should happen along. Lucy is tethered onto Wichers by a very long rope, which allows her to work all sides of the herd as they make their way to and from their destination.

Wichers’ 17 goats are the most goats she has had since starting the program two years ago. She said her herd doubles every year when the nannies have kids, which this year, will require her to sell some or cull some. All of them are either purebred Alpine Goats or have a good share of their genetics as Alpine.

The ambassador of the group is a 200-plus pound black Lamancha Alpine goat named Sammy, who always hangs around closest to Wichers and is always the first to greet visitors who stop by and want to meet them.

Wichers said she is often stopped by tourists who ask questions about what she is doing with her goats, which she said she enjoys answering. Based on the positive feedback she has received from tourists, she feels it would be a good idea for the city to promote the program to visitors and invite them to town to see the goat program at work.

Burris said based on the results of the program so far, he would recommend other communities give it a “goat” as well.