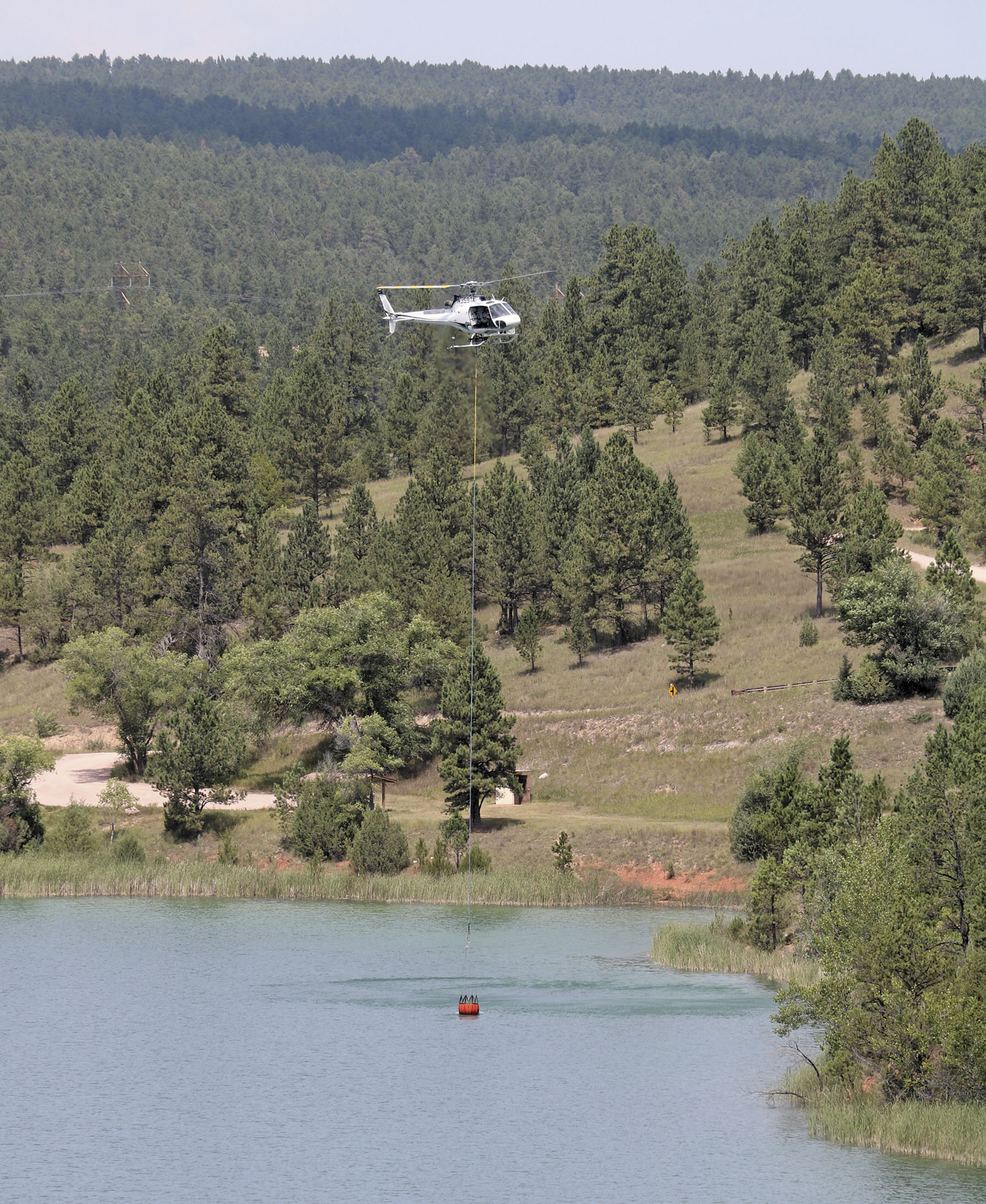 A helicopter picks up a load of water from Cold Brook Reservoir this past Monday, Aug. 3, while assisting on the Lady Ranch Fire north of Hot Springs. Due to the chopper working in the area, the lower portion of the dam was closed to the public for a period of time on Monday. The Lady Ranch Fire was one of several small (less than one acre) fires that crews have responded to in the past week.

HOT SPRINGS - The commission voted in favor of a temporary fire danger resolution when they met on Tuesday, July 21. The resolution imposes a ban in Fall River County, outside of a municipality or land within the Black Hills Fire Protection District (BHFPD), on all open burning and fireworks except for petroleum-fueled or charcoal briquette fueled grills used for preparing food. Campfires will not be allowed on private land or licensed commercial campgrounds.

In a follow-up with Emergency Manager Frank Maynard in regards to the ban on campfires at licensed commericial campgrounds, this does not apply to state-operated places like Angostura Recreation Area, which is outside of the BHFPD but is also where the county does not have jurisdiction on such matters.

The fire danger resolution is in effect when the fire index reaches moderate, high, very high or extreme. The ban will stay in effect until repealed by the Fall River County Commission. A penalty of a fine not to exceed $200 and/or not to exceed 30 days imprisonment for each violation will apply. Additionally, persons in violation of this burn ban may be responsible for any and all suppression costs.

The Commission voted to keep the distribution of PILT monies for 2021 the same as 2020. Fall River County has 285,450 acres of non-taxable federal lands within its boundary, for which the county may receive $763,134 in PILT (Paid In Lieu of Taxes) from the federal government. The PILT money helps offset losses in property taxes due to the non-taxable federal lands. In turn, the county can keep the PILT or vote to distribute it to entities within the county, such as fire, ambulance and township boards.

Commissioner Paul Nabholz made a motion to have the county keep the PILT monies and to ask the various entities to come before the commission through the budget process and make their budget requests for the coming year. His motion died for lack of a second. Nabholz voted ‘no’ for keeping the PILT distribution the same as in 2020, while the other four commissioners voted in favor of the same distribution.

Director of Equalization Susie Hayes presented the Discretionary Formula New Resolution for a vote. During the commissioners’ meeting on July 7, they discussed whether to change the formula to 0-20-40-60-80 percent property taxes on applicable new construction instead of the county’s current 0-0-0-0-0 for five years. The state is requiring all county discretionary formulas to be rewritten, even if the formula remains the same. Hayes suggested keeping the formula the same for now, so current construction is not affected, and then looking at the formula again in November. Any current construction must be completed by more than 50 percent before November should the commissioners vote to change the formula then. The commissioners approved keeping the same formula of zero percent for five years, with Commissioner Nabholz voting ‘no.’

The commissioners voted to continue the COVID-19 procedure at the county buildings for at least another two weeks. Greeters are stationed at the courthouse basement door to take temperatures, and ask the COVID questions. Commissioner Nabholz said he wanted to dispense with the greeters and open the buildings, the other commissioners said that keeping the precautions for two more weeks until they vote again would not hurt.

GIS manager Stacey Martin presented information on making the county’s website ADA (Americans with Disabilities Act) compliant. The content must be easy to read or hear, easy to understand, and easy to navigate. She added a handicapped icon to the site that gives options, such as changing the colors to grayscale and changing font sizes, etc. She said she continues to work on the site and is open to comments on improving it.

Martin also reported that a small piece of property in Butler Park, which is lot 12 block four of the Fargo and Prentice addition, was seized by the county for taxes in 1926 and then auctioned, but there were no bidders. Martin asked commissioners to approve a quit claim giving the property to the City of Hot Springs, as owner of the park. Commissioners approved the quit claim.

Commissioner Nabholz reported that the Custer/Fall River Landfill board elected Mike Linde as chairman. The board holds six meetings a year, for which board members receive $50 a meeting.

In other business the commissioners approved the following items.

• The sheriff’s department hiring up to 10 guards at $25 an hour for two weeks during the upcoming pre-trial and trial. The cost is reimbursable through the COVID-19 reimbursement agreement.

The county commission meetings are livestreamed on the county’s facebook at https://www.facebook.com/FallRiverCounty/live/