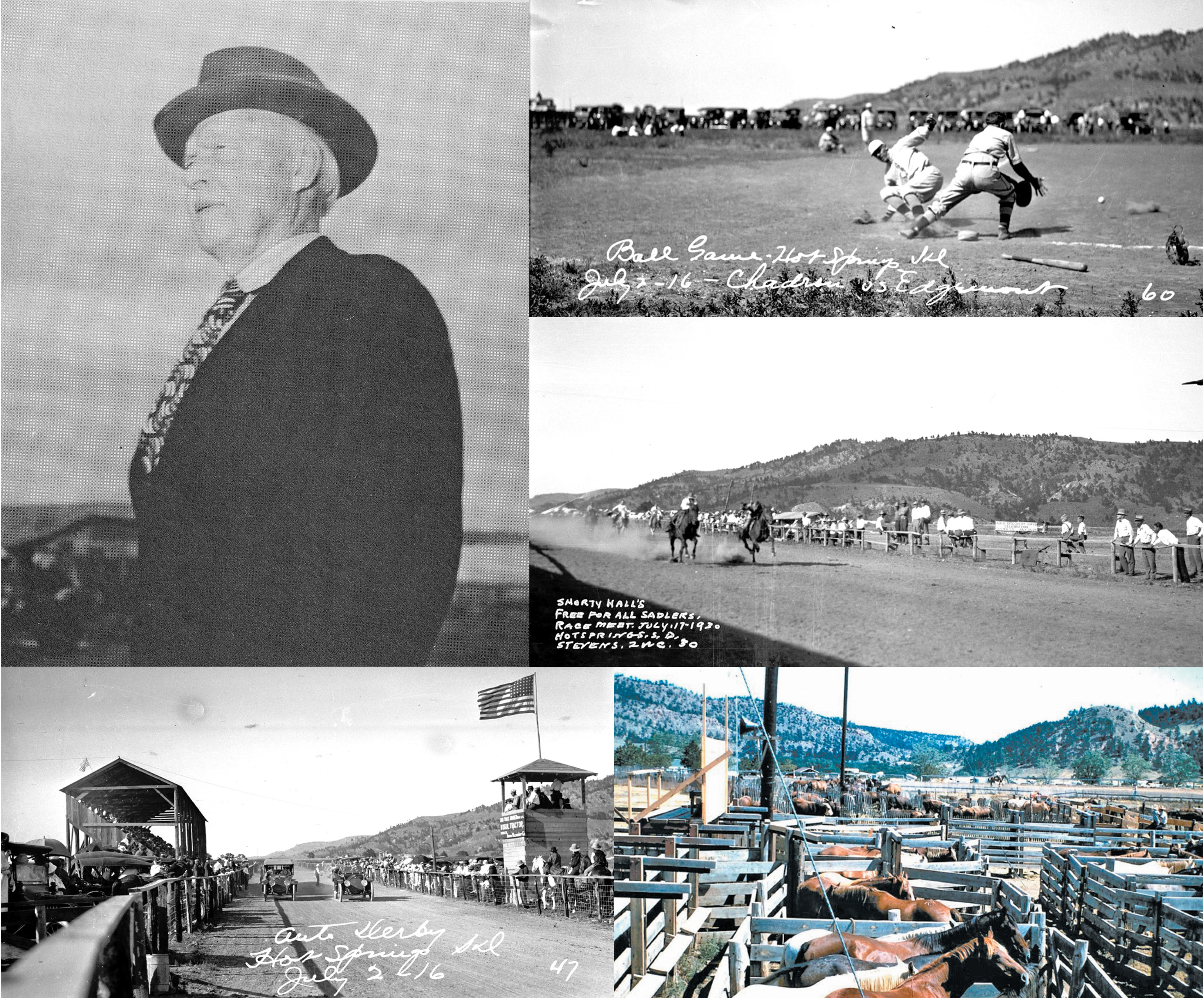 Editor’s Note: This story about F.O. Butler and Butler Park is the first in an occasional series of stories by the Fall River County Herald-Star entitled "Naming Writes," which are written to highlight the places of today that are named for the people of yesterday.

HOT SPRINGS – After a lifetime of accumulating properties throughout the United States, Frank Osgood Butler, during his self-described “days of the long shadows,” started to give away his assets and land-holdings to various people, causes, and organizations. During this time in the 1950s, he continued his generosity towards the community of Hot Springs by officially handing over Butler Park to the city, a piece of property he promised to the city as early as 1933. Soon after at age 93, he left Hot Springs for what would be the last time, and died in West Palm Beach, Fla., on March 18, 1955.

But who was this wealthy man from a large industrial city? Why did he enjoy visiting Hot Springs for 30 years? And how did the large park in the middle of town become Butler Park?

His story begins in 1861, the same year as the start of the American Civil War.

F.O. Butler was born in Chicago to Julius and Julia Butler on April 22, 1861. Julius, along with his brother Oliver, owned and operated J.W. Butler & Company, a paper merchandising business. The Civil War led to an increase in paper production, but their business suffered many setbacks during the 1870s. The Great Chicago Fire in 1871 destroyed the company’s building and inventory, but Julius quickly found another location. Then, the Panic of 1873 led to poor economic times in the country. And personally, Julius and Julia suffered the loss of their second daughter, Florence, who was only 18 years old at the time of her death. A young Frank Butler watched and learned while his family endured the hardships of life, and through this he developed into a charitable man of great integrity.

At age 17, Frank started working full time at his father’s paper company. He took to heart a sign posted in the workplace entitled “House Rules of the J.W. Butler Paper Company,” a list of 28 principles employees should live by: “Keep good company or none,” “Live up to your engagements,” and “Good character is above all things else,” to name a few.

He married his wife, Fanny, in 1886 and in 1890 was elected Vice President of the corporation. By this time the paper company now had 75 employees with annual sales over $2 million. Seeking a quiet place to escape from the city, he bought land in the country outside of Chicago. This property became known as Oak Brook Farm, where he and Fanny began to raise horses. Julius Butler died in 1912, and after this Frank became the president of the paper company.

After having previously visited Hot Springs before World War I, Frank and his wife arrived in the city for an extended stay in 1924. The couple from the Chicago area decided that “the unhurried pace in the small canyon city held a special magnetism for them” and that the community “had a charm all its own.”

The Butlers purchased the Villa Theresa on Elm Street, which Robert F. Karolevitz, author of “Paper Mountain: The Story of Frank Osgood Butler,” argues “was the public revelation of Frank Butler’s love affair with western South Dakota which was to last for more than three decades until his death.”

By 1917, the grounds had a large grandstand, additional bleachers, about 40 stables, and a full time caretaker. Visitors from other areas of the Black Hills, Nebraska, Wyoming, and Colorado traveled to Hot Springs to attend the various events and activities held on College Hill.

In late 1925, the Hot Springs Star reported that F.O. “arranged final details for the establishment of a polo pony breeding ranch on 1,000 acres of land purchased [...] to be known as the Seven-Bar-Eleven ranch.”

Having already established a polo club back in Illinois, Mr. Butler was excited to bring the sport to southwestern South Dakota, and his new tract of land northeast of the city was the perfect place to raise horses. Also in 1925, the Hot Springs Polo Club was organized and played their first game against Edgemont. Referring to polo as “hockey on hoof,” the local newspaper announced: “Not a great many people in Hot Springs know that a new form of sport has been taken up within the past few months in the vicinity of Hot Springs that promises to become a great attraction.”

At some point in the latter half of the 1920s or early 1930s, Frank Butler “acquired the racing grounds because of his interest in polo,” and the park began to be commonly referred to as Butler Park.

During his time in Hot Springs, F.O. kept busy in the community. He was a member of the Kiwanis Club, donated a vehicle to the fire department, helped secure the small depot for the Chamber of Commerce, paid for the supplies to landscape the new school building, supported the local flower show, and encouraged residents to keep the city clean.

In the 1930s, Butler Park remained very active with horse, pony, and wagon races, Water Carnival, a Great Council of area Native Americans, Townsend Day, and “bathing beauty” contests. In 1937, the local softball team worked with members of the Civilian Conservation Corps to bring lighting to the park and over 40 WPA workers improved the racing track.

Like his father during the 1870s, Frank Butler experienced difficult times seven decades later in the 1940s as World War II led to some complications in the industry. Also, in 1942, while at a checkup at the Mayo Clinic in Rochester, Minnesota, the doctor told F.O. to “ease up a bit.”

In the summer of 1943, a violent hailstorm severely damaged grain fields at the 7-11 ranch and in autumn of the same year, a wildfire burned 1,600 acres of Butler’s pastureland. None of this seemed to greatly deter Frank Butler.

Nearing the end of his life, F.O. experienced many happy moments. Dr. Lyman E. Jackson, then president of South Dakota State College (University) in Brookings and Frank Butler formed a friendship in the 1940s, which ultimately led to Butler gifting his entire 7-11 ranch to the institution. A press release in 1944 announced: “Gift of the 14,000-acre ‘7-11’ ranch and a trust fund of $100,000 by F.O. Butler, prominent Chicago paper manufacturer, to establish the South Dakota State College Foundation was announced today by President Jackson.” This scholarship is still available to students attending SDSU today. In 1948, Butler received an honorary doctorate from the college, and F.O. “cherished the honor, possibly above all others he had received throughout his extended lifetime.”

In the “days of the long shadows,” Butler knew the end of his life was near, but continued to involve himself with business around Hot Springs and Chicago. According to Fall River County records, Frank officially handed over Butler Park to the City of Hot Springs in 1951 (although the deed was conveyed to the city in 1933, many conditions and stipulations were added, which expired in 1951).

Robert F. Karolevitz explains that the park was to be used “for recreational purposes, and a corporation was formed to develop the land and broaden its use.” The Butler Park Association held its first meeting soon after and declared that “every citizen of the community [is] a stockholder.”

The Hot Springs Star reported: “There is hardly a city in the country that wouldn’t give a pretty penny for such a facility as Butler Park.” The plan was to make Butler Park a more year-round facility. The local Boy Scout troop planted over 600 elm, honey locust, and Russian olive trees in the park. The grounds held kite flying competitions, a dog parade and pet show, the Butler Derby, and baseball games. Newly installed lights at the park gave forest rangers stationed at the Harney Fire Tower quite a stir, as it appeared a large wildfire was burning in the southern Hills.

In 1954, Frank Butler left Hot Springs and joined his wife in southeastern Florida. He died the following year, one month before his 94th birthday. Upon learning of his death, the United Churches of Hot Springs “planted a blue spruce tree in his honor at the entry of their new house of worship.”

After Butler’s death, the park was still full of life, as a new playground was built and the grounds hosted new events such as the Shrine Circus and Armed Forces Day. A Junior Rodeo was held in 1958 and in August 1960, the park was the location of the 12th Annual High School Rodeo National Championship Finals. One of the musical acts at the rodeo was Johnny Horton, best known for songs like “Battle of New Orleans” and “Sink the Bismarck.”

In the summer of 1972, the grandstands that once dominated the landscape at Butler Park were torn down, and since then, the facility has transformed into a modern-era park. In keeping with F.O’s vision of an “air sports and local pleasure ground,” today’s Butler Park features tennis and basketball courts, outdoor grills and picnic areas, a skate park, soccer, softball, and baseball fields, playground equipment, and walking paths.

Frank Osgood Butler would most certainly be pleased by the fact that his park “remains one of the most popular multi-use recreation facilities in the Black Hills.”

A special thank you to Dawn Johnson and Karl Bochert for their help with this story. Information for this article was obtained from: “Paper Mountain: The Story of Frank Osgood Butler” by Robert F. Karolevitz, the Fall River County Register of Deeds, the City of Hot Springs, and “The Butlers of Oak Brook,” a series of articles featured in Classic Chicago Magazine. All photos from Dawn Johnson’s “History of Butler Park” presentation at the 2014 Fall River County History Conference.