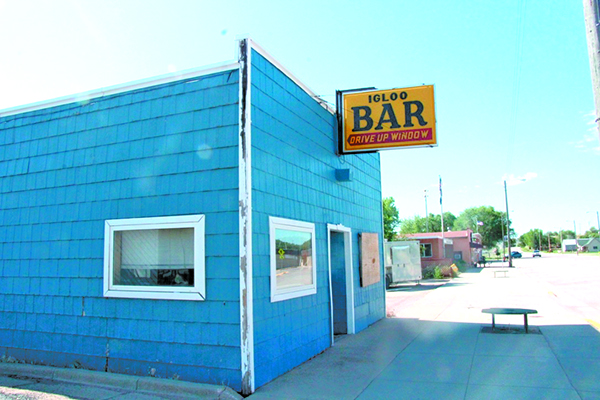 The Igloo Bar, located just down the street from the Hat Creek Grill (which is somewhat visible in the far right of this photo), is under new ownership and currently being remodeled. A new name is also expected, which will be the Edgemont Taphouse.

EDGEMONT – In its brief history, the Hat Creek Grill, at 521 2nd Avenue in Edgemont, has established itself as a gathering place. It has its regulars who come in and occupy the same bar stool as though they have a title to it. It’s an easy place to get comfortable in, kick back and relax for a while. And that’s exactly what co-owners Cad Waite and Jesse Stubbs had in mind when they purchased and re-opened the bar-and-grill in October of last year.

Their visions have largely come to fruition. The same familiar folks come through the door on a regular basis and oftentimes bring someone with them that has never come in before. So if your mouth is watering for a tasty half-rack of ribs on a Friday or Saturday evening, come early if you want to be assured that any will be left by the time you get there.

This past Sunday evening, July 18, as a healthy assembly of regular local folks were finishing the last plates and pints of the day, Waite reflected on the inviting atmosphere that he and Stubbs envisioned early on and he also pointed out the obvious limitations of the venue.

He said it lacks space for a band, so its capacity for live music just really isn’t there. Its booths and bar stools will allow for about 40 people comfortably, but on crowded weekend nights they always manage to squeeze in a few more. This means that group events – parties, receptions, and holiday gatherings – are out the window.

Waite and Stubbs found that they were challenged even in terms of storage space. They inquired about the status of Igloo Bar, which has been sitting idle at its location down the street at 505 2nd Avenue. The then-owner was receptive to a purchase offer and the partners became the proud new owners.

Almost immediately, alternative ideas began to be bounced around in conversation between them and a few of the more loyal patrons that show up daily at Hat Creek. A couple of additional partners came into the picture, joining Waite and Stubbs in their quest to add an additional successful business to the scene in downtown Edgemont. One of the first ideas was to start brewing craft beer, but after careful consideration, the group decided that at this time it would be best to leave this task to existing area breweries and have a different focus. Eventually, the focus centered on its capacity and the things they just couldn’t do at Hat Creek because of limited space. They concluded that what they wanted was a sufficiently large venue to accommodate dining and music that was large enough to entertain holiday and party events.

One of the new partners is Richard Artz, a retired as Executive Vice President of Refrigerated Foods with ConAgra Refrigerated Foods Companies. After retiring from ConAgra, he started and operated a consulting firm specializing in food processing, transportation, warehousing, and logistics.

Artz was born and raised in South Dakota. He attended school in Rapid City and as a young man he spent a lot of time hunting and fishing in Fall River County. His experience growing up coupled with the small town atmosphere is what attracted him to Edgemont.

“I’m excited about being a local business owner and the ‘re-start’ of the Igloo Bar (later to be re-named the Edgemont Taphouse),” says Artz. “Our co-owners and I have broad knowledge of food processing, food service, and the hospitality industry.”

The early stages of the partnership have included significant renovations to the building, according to Artz, who says he is excited to offer the local and surrounding community another option for relaxation and socializing.

Waite says he is really excited about a venue large enough to entertain something other than a solo performer. Live music from a six-member band is in the works and the plan is to have a dance floor as well. Waite mentioned poker, cribbage tournaments, and charity events. Pool tables, dartboards and other entertainment mainstays of small-town bars are likely to be part of the picture as well. There are also plans for a morning to-go window from which to offer espresso, coffee, and grab-and-go breakfast items.

Stubbs says he is most excited about having a venue that will offer a late-night atmosphere where music and entertainment might be the biggest attraction, although he is quick to point out that food and drink will not be neglected. He hopes to offer several local microbrew products on tap.

While the challenge of an expanded facility would seem intimidating to a lot of entrepreneurs –– especially after having a new establishment open for less than a year. But the reception and support by local patrons has provided the courage and motivation to make a move that might spark interest on the part of others to promote a more vibrant downtown scene and bring back some of the town’s former prosperity.

Frequent patron Larry Harter summed up why there is the expectation of success on the part of the local community.

“Hat Creek is doing business with local providers of produce and meats and is reaching out and networking locally,” Harter said. “Everybody is taking care of everybody here like it used to be back in the days when folks sold their goods to others in the community. And it’s creating commerce in the city of Edgemont.”