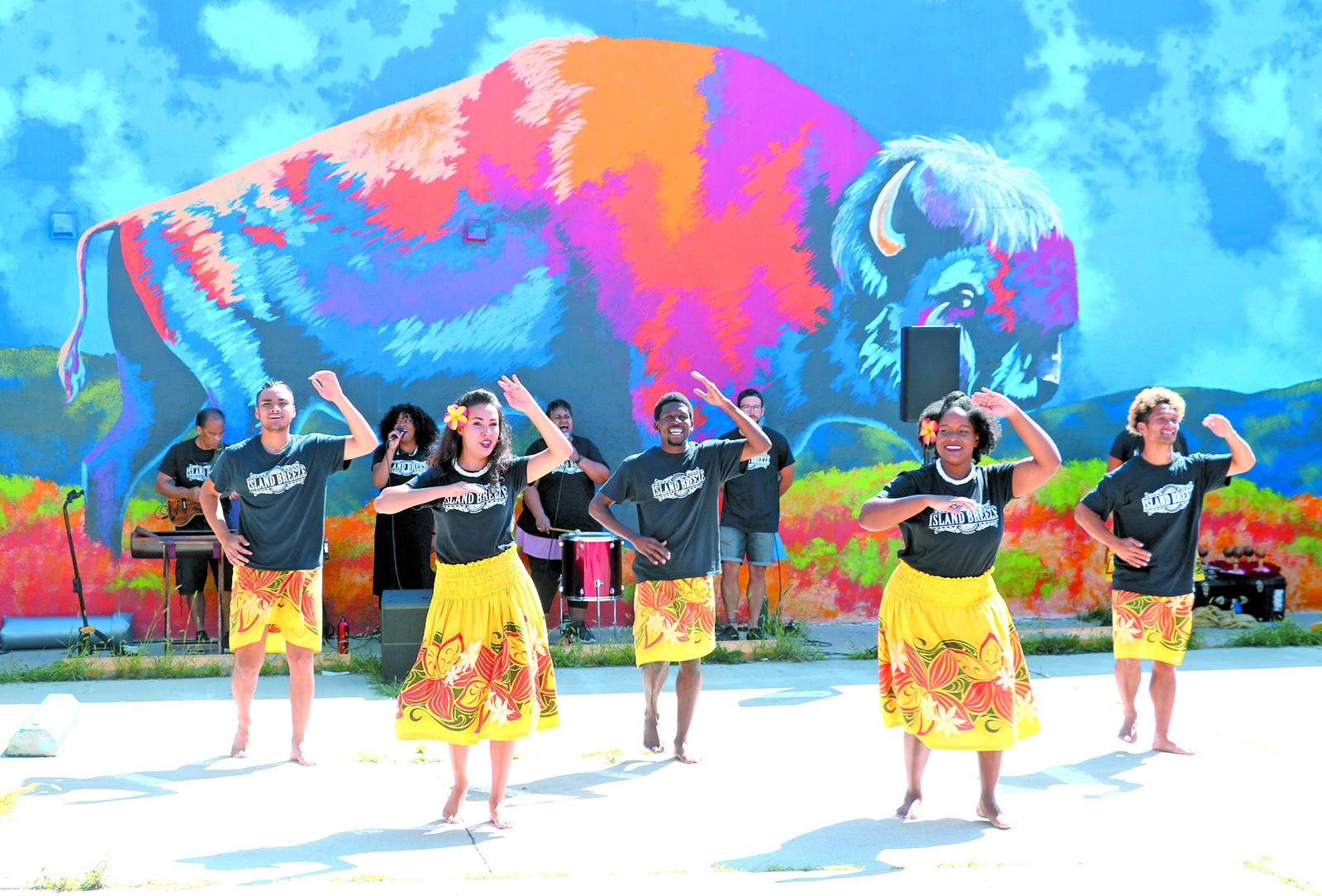 Island Breeze performs in front of the Bison mural next to the Hot Springs Police Department on Monday morning, July 20. This past Saturday, July 25, in Centennial Park, the international performance group will give a free concert, in full Polynesian costume.

HOT SPRINGS – About 20 members of the international performance group known as Island Breeze entertained and held a blessing for the Hot Springs Police Department this past Monday morning, July 20, in an effort “to share the true essence of Aloha,” according to one of the group’s members Lathan Lauing, who is from Oral and graduated from Hot Springs High School.

According to the group’s Facebook page, Island Breeze is an international performing arts group that began on the tiny island of Samoa in 1979. “It was birthed out of a desire to display the beauty and dignity of the Polynesian people in hopes that others would come to the realization of their own divine design. We believe that all things were originally created for good and have committed ourselves to sharing this message of hope and purpose through the work of cultural redemption.”

Lauing said he joined the group as a vocalist this past January with hopes of traveling around the world to entertain the masses while sharing their Christian message. However, due to the travel limitations spurred by the COVID-19 pandemic, the group’s travel has been confined this summer to only locations in the continental United States, including many of the hometowns of its members. While in Hot Springs, all 20 of the members are staying at the Lauing family ranch near  Oral, in their lodge which normally houses clients for the family’s hunting preserve.

Last Friday, July 17, the group, which is based out of Kansas City, Mo., also performed for free at the Farmer’s Market in Centennial Park, and will again take the stage this Saturday, July 25, at 7 p.m., for another large performance, in which the public is invited to attend, free of charge.

Monday’s event at the police department, Lauing said, was to honor and bless local law enforcement and show how much their work is appreciated.

“Police have a great burden and responsibility, so this is to show them that we value their service and all that they do for their community,” Lauing said.

He added that two weeks prior, Island Breeze visited and performed at the George Floyd Memorial Site in Minneapolis, where they shared the Christian message of unity amongst the city’s residents. To see a video of their time there, search for the Island Breeze Impact World Tour online.

The group’s Facebook page says, “We recognize that performing arts is not only for entertainment purposes but can be used as a powerful tool for social transformation. Our team travels nationally and abroad on average nine months out of the year partnering with various communities, businesses and churches to spread the message of hope, unity in diversity, respect and purpose. We do this primarily through the performing arts and Polynesian cultural expression. Training schools, seminars, workshops, community events/service and public speaking are a few of the services that we offer.”