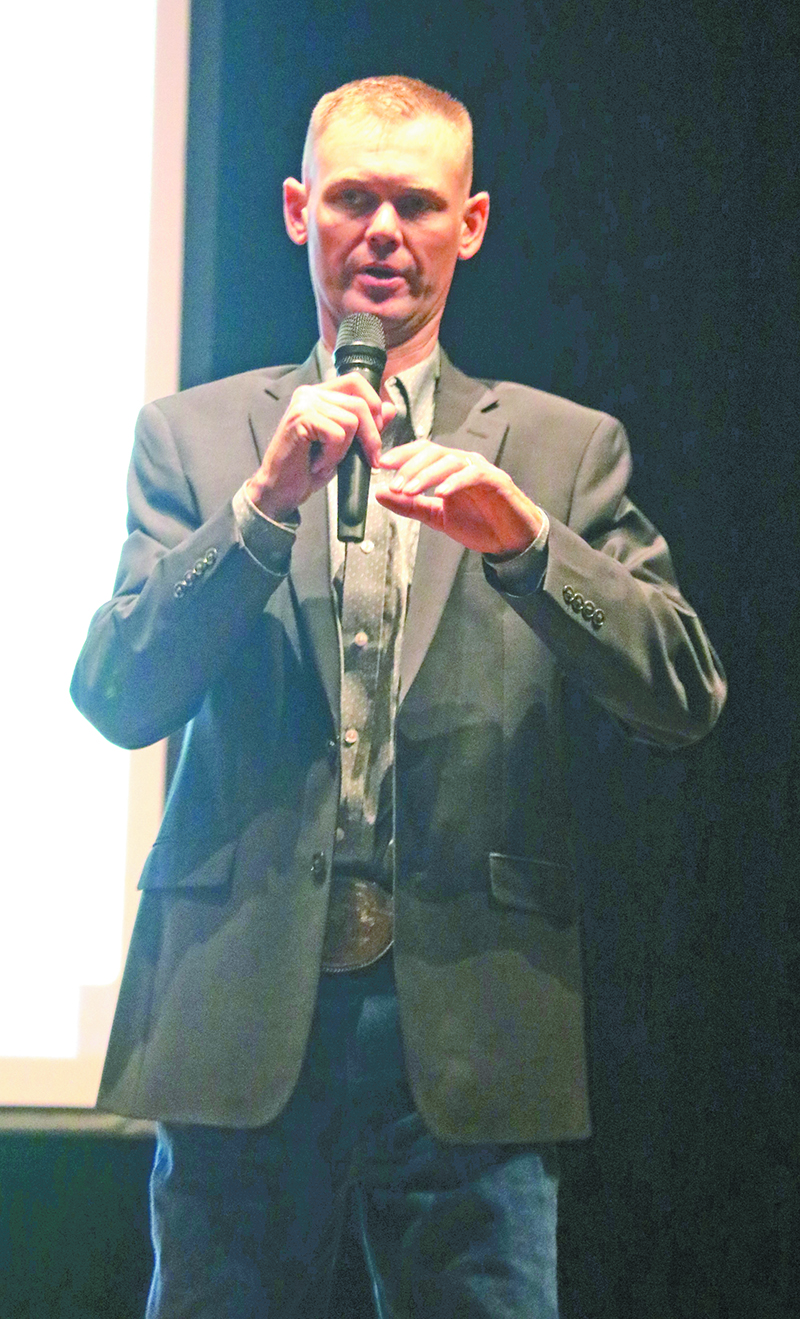 Neil Sanders, a HSHS alumnus who is now the marketing director of Parry Angust in Sterling, Colo., led a discussion last Wednesday, July 8, at the Mueller Civic Center.

HOT SPRINGS – More than 100 people attended a meeting in Hot Springs last Wednesday, July 8, to discuss the possibility of a rancher-owned meat processing facility somewhere in the Black Hills area.

Neil Sanders, a Hot Springs High School alumnus (1999) and current marketing director for Parry Angus of Sterling, Colo., facilitated the meeting. He said he has been developing the concept over time while driving back-and-forth from his home in Rapid City to his job in Colorado, and while bouncing ideas off the heads of many others in the industry, including a number of other fellow HSHA alumni like Casey Bachand (2000) and Ross Cuny (2000).

“It puts more money in our pockets; more money in the consumers pockets; they buy more beef; we raise more beef,” Sanders said while standing on the Mueller Center stage, as he described the advantages of a cooperative-based business plan for the facility.

The event itself was sponsored by Parry Angus, and after a brief plug for his company, Sanders went through a power point presentation that explained the purpose of the meeting and then also the various obstacles and solutions for achieving that goal.

Sanders said the reason why he had asked everyone to attend was not for a “gripe” session, but instead to “form an organization to develop a processing plant to harvest and sell our products with the intent of capturing the value of our product while saving money for the consumer.”

In addition to the meeting being open to the public – most of whom appeared to be Fall River area ranchers with some others from surrounding counties and states – Sanders also asked a number of key personnel to be in attendance in order to answer any questions.

To assist with financial questions, accountant Genevieve Dement-Osborn, now of Rapid City but also a HSHS alumna (1997) was in attendance. For legal questions, which included an afternoon session where he explained the advantages of a co-op versus a corporation or limited liability company, attorney Quintin Riggins, with Gunderson, Palmer, Nelson of Rapid City, was in attendance.

Some of the primary obstacles to get the co-op off the ground that Sanders identified during his presentation included: finding and training labor, where and how to build the facility, whether or not to offer retail, insurance, marketing, water and permits, offal (aka variety meats, or the internal edible organs of a butchered animal), brand inspection.

When discussing the specifics of some of the obstacles, Sanders said the plan should be to “aim high but shoot low” and said one of the biggest mistakes that can be made is to try to be too big, too fast. He added that the plan should be to build for a 50 head a week footprint, but start at only 15, then grow to 35 and then 50. He added that cooler space is the most limiting factor.

He suggested, that while the main focus would be beef, the possibility of also processing pork might help alleviate seasonality issues. Processing buffalo should also be considered, since they require the same sized hook as beef.

When asked by an audience member about a location, Sanders suggested that one possible ideal location would be somewhere north of Buffalo Gap, but that it might also be Rapid City, or Edgemont, or wherever provides the best solution for their various needs.

In regards to the retail aspect of the facility, Sanders said an observation deck should be built into the plant to allow consumers to see where they beef comes from, which then also plays into the agri-tourism industry.

Membership into the co-op would be a requirement for any producer to have their beef processed there, however, the cost to each rancher to become a member is an unknown, until all of the costs can be determined, including construction and equipment purchases.

Sanders said solutions for all of the obstacles were realistic with the establishment of a committee to help steer the plans and ultimately form a board of directors. During the afternoon session, several volunteers stepped to help lead the effort as part of an exploratory committee, including: Tyler Trevillyan and Ross Cuny, from east of Buffalo Gap; Dustin Loper who lives in the Provo area; Sherri Vig from the Vale area, Andrea Powers with the Southern Hills Economic Development Corporation; Dave Arnold of Hot Springs; Harvey Fitzgerald from south of Buffalo Gap; along with both Dement-Osborn and Sanders.

Prior to the attendees convening for lunch and coming back for the afternoon session, Ken Charfauros with Wall Meats spoke to the audience and explained how he had been working for the past year-and-a-half to expand his business and possible open a similar, privately-owned meat processing facility near New Underwood.

He explained how he had already gone through many of the planning steps that Sanders is proposing that the volunteer committee do to establish this co-op. Charfauros, a big proponent for South Dakota beef, said there is enough demand for more processing facilities in the state and was supportive of this effort, despite being a competitor in the same market.

Charfauros said he is considering the New Underwood area for his new 24,000 sq. ft. due to its location along the I-90 corridor for transportation and agri-tourism, as well as it’s proximity to Rapid City’s labor force. He said the location is also close to a railhead, as well as a regional airport. He said he had determined that he will need 36 employees to operate the new plant and plans to hire only local people. He estimates the cost to be around $2.4 million.

He added that his plant will be built with the possibility to expand in size up to 50,000 sq. ft., and with the growth of more processing plants in the area, the need will arise for more feed lots as well.

“I’m a competitor, but also a proud supporter,” Charfauros told the audience. “We have a different business plan, but it’s all about the same thing. Beef.”