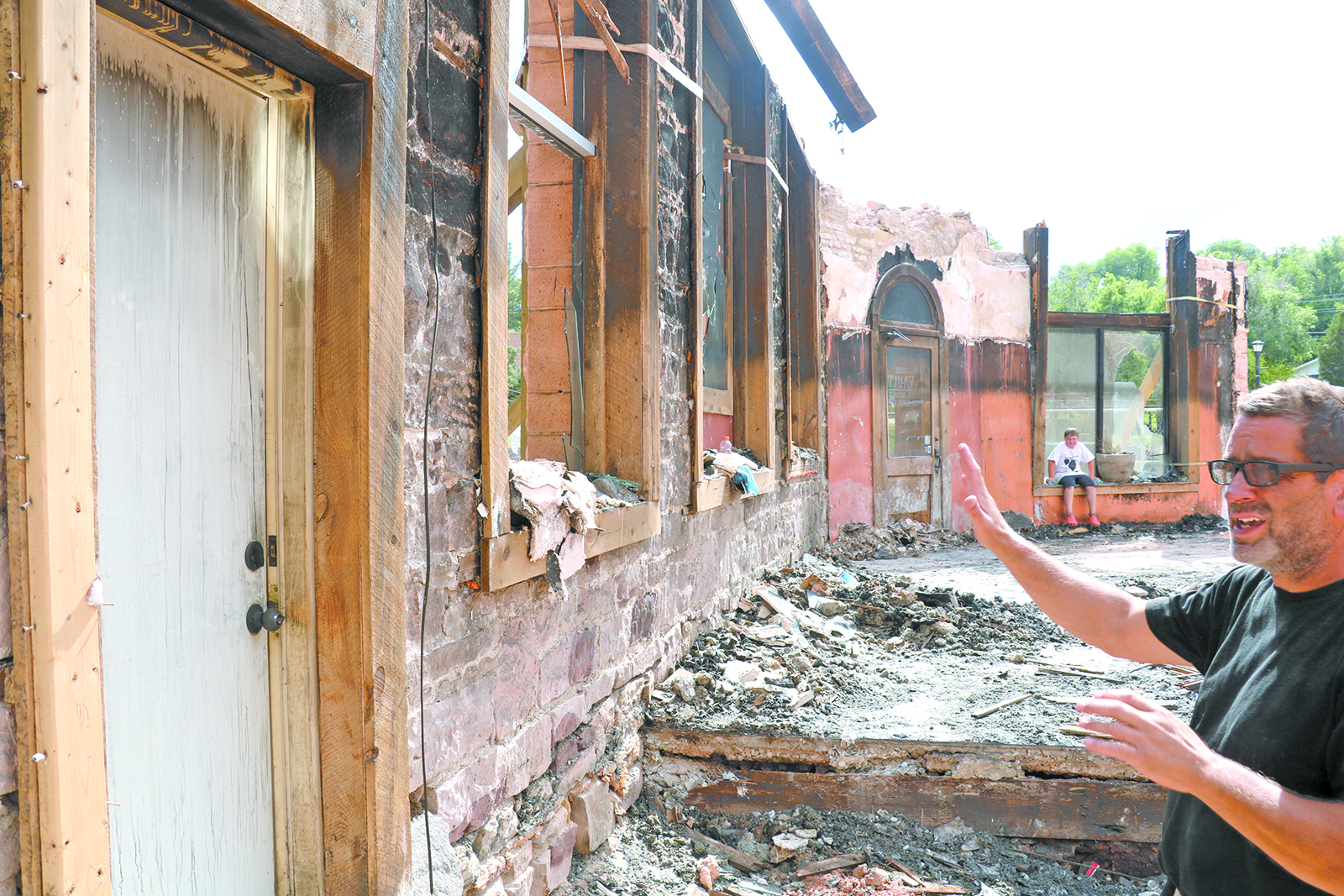 Prior to the walls coming down, Greg Gunwall, owner of The Vault, stands inside the walls of what was once his restaurant that was destroyed in a fire on Feb. 17, 2020. Despite wanting to leave up the original sandstone walls and incorporate into the plans of his reconstruction, Gunwall recently learned he would be unable to do so because of the disrepair caused from 116 years of time.

HOT SPRINGS – The final sandstone bricks of the buildings destroyed in the February 2020 fire on North River Street in downtown Hot Springs came tumbling down last week, much to the disappointment of The Vault’s owner Greg Gunwall.

“We made every attempt to save the sandstone by securing walls with timber, careful excavation, waiting till all the others had completed their work so that we could gain access from the inside,” stated Gunwall, who had plans to keep the more than a century-old facade and incorporate it into his plans for rebuilding the restaurant.

“The floor was built in 1904 and all the floor joists to the south of the building were completely gone from years of deteriorating conditions. Poor water run off from the hill behind us and its 116-year age made the foundation very unstable to rebuild. You could take a straw and break up the mortar in the foundation.”

The electrical-caused fire, which occurred on Feb. 17, destroyed a total of five businesses including The Vault, China Buffet, and Heartsong Quilts. The Powers family, which owned Heartsong Quilts along with two other family businesses also located on the premises, have indicated that they do not plan to rebuild but instead eventually sell the vacant property.

However, both Gunwall and the owner of China Buffet, have indicated that they do plan to rebuild in the same location. Both of those construction projects will likely not commence until near the end of the highway reconstruction project in front of the buildings, which is scheduled to take place over two years, in 2021 and 2022.

Gunwall, while unable to use the original facade on his new restaurant, does plan to incorporate as much of the original sandstone bricks in the new construction. During a conversation held on his property a couple of days prior to the facade coming down, he indicated a desire to eventually build an indoor stage in the restaurant that utilizes a brick with the year 1905 carved into its face. Gunwall also stated how he would like to rebuild the original brick archway that served as the restaurant’s main entrance.

In anticipation of having to knock down the south way facing the alley and the front wall with the archway, Steve Simunek, who has been doing the demolition, brought in gravel to help soften the ground. This way, when the walls were pushed over, they would land on the gravel and then naturally come apart at their seams, as opposed to cracking or breaking up into smaller, jagged pieces.

With the removal of the existing south wall, Gunwall added that it will now open up the possibility of expanding on their previous footprint, since their property line goes 10 feet into the old alley. Consider the alley is about 50 feet long, that allows for 500 more square feet of space to build.

Until construction begins on his new restaurant – which he said would likely not happen until near the end of the road work in 2022 – Gunwall said he hopes to clean up the property and plant grass which could open up the possibility of groups to rent the space and host outdoor events.