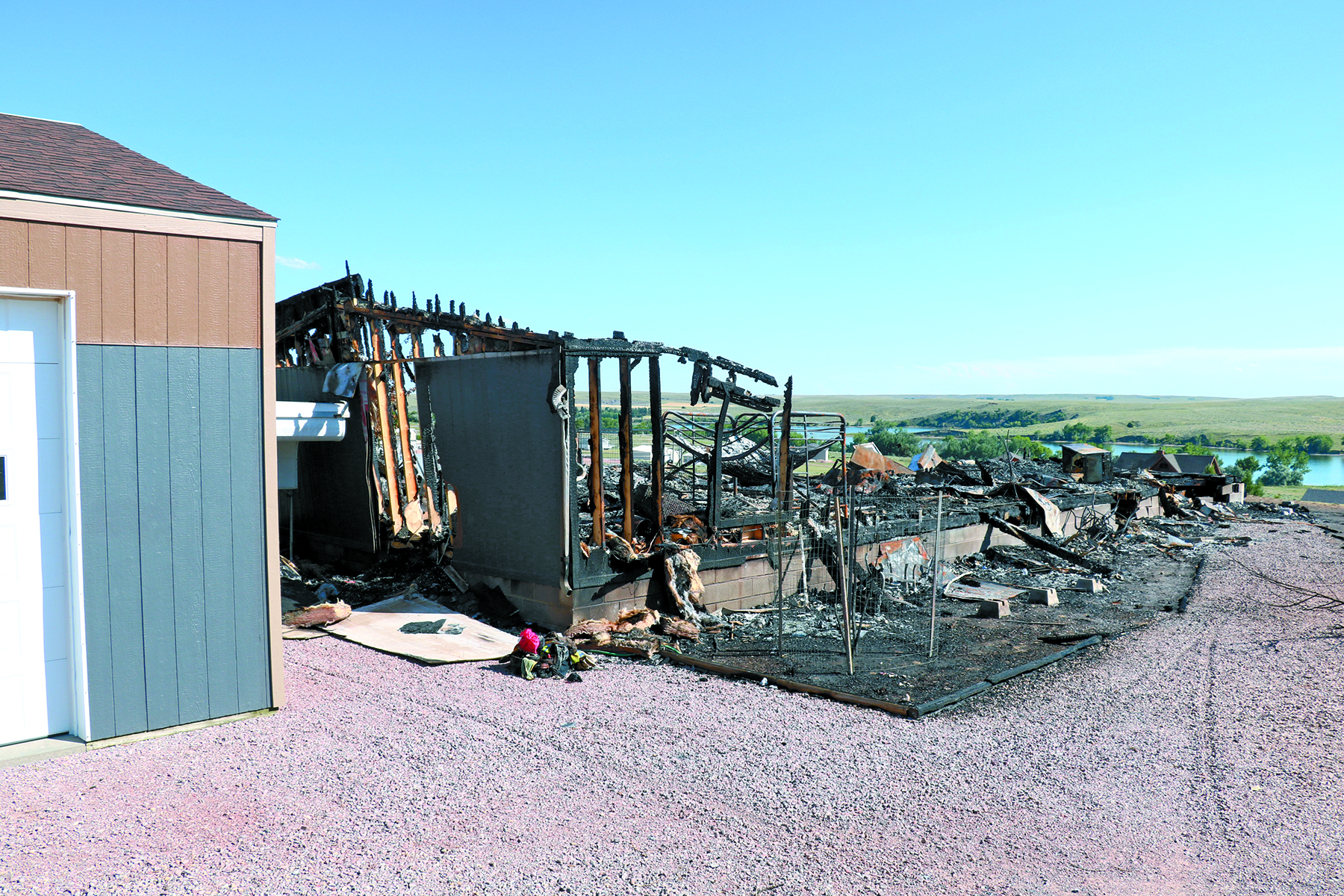 HOT SPRINGS – Area fire crews were kept extremely busy over the Fourth of July holiday, which included battling five blazes in Fall River County over the span of four days, while also assisting with a traffic fatality simultaneously as two of the fires burned on Friday night, July 3.

On Monday, July 6, Hot Springs Fire Chief Dar Coy recalled how he had gotten home three nights earlier, on Friday night, and had just taken off his boots to sit down and enjoy watching the Mt. Rushmore fireworks display on television when a call came in around 9:40 p.m about a house fire at Angostura Reservoir.

That fire, which was caused by fireworks, ended up completely burning down and destroying a one-level modular home in a housing development on what is known as the Long’s side of the lake, near Pirate’s Pub. The home, owned by Douglas Rumpca of Rapid City and located at 13409 Evergreen Lane, was a total loss. However, the large shop/garage which was located nearby was saved, along with all of its contents. In addition to the loss of the home, a few trees and about a half acre of grass was also burned. In addition to Hot Springs VFD, several other rural crews responded including Oelrichs, Smithwick, Minnekahta and State Wildland Fire.

Prior to arriving on-scene at the house fire, Coy said they actually drove up on a second fire in the area, just after 10 p.m., located in the Heartland Trail Court, across from Angostura Den along Hwy. 18/385. That fire’s cause is being ruled as lightning and burned 6.5 acres to the north of several trailer houses. No structures were damaged in this fire, which burnt only grass and several yucca plants.

At the same time as both of these fire, area emergency personnel also responded to a fatal accident involving a motorcycle and car which occurred at 10:42 p.m., just 1.6 miles of Hot Springs on Hwy. 385.

Michael Rowland, age 37, of Pasco, Wash., the driver of a 2016 Harley Davidson FLHXS, died when his motorcycle struck a 1999 Pontiac Grand Prix, driven by Andrew Johnson, 29, of Hot Springs.

According to a spokesman for the S.D. Dept. of Public Safety, the 1999 Pontiac Grand Prix, driven by Johnson, was northbound on U.S. Highway 385 when it collided with the Rowland’s southbound motorcycle which was traveling in the wrong, northbound lane.

Rowland, who was not wearing a helmet, was thrown from the motorcycle and died at the scene.

Johnson, the driver of the Grand Prix, suffered serious non-life threatening injuries and was taken by ambulance to a Rapid City hospital. He also had three juvenile passengers – a make aged 15 and two females both aged 13 – each suffered minor injuries. All four vehicle occupants were wearing seat belts.

Following the two fires and serious traffic accident last Friday night, area fire crews were back at it again on Saturday, July 4, when they responded to yet another fire caused by fire works, this time in a housing development on the Shep’s Canyon side of the lake, off of Hwy, 71 (Cascade Road).

Prior to the fires on Friday and Saturday last week, area Fall River County crews also battle the Cold Brook Fire on July 2 and the Medicine Creek Fire on July 1.

The two fires however were very different, as the Cold Brook Fire was only one-tenth of an acre and quickly snuffed out in a matter of minutes and ruled caused by spontaneous combustion. The Medicine Creek Fire however was the county’s largest fire to date and quickly consumed 137.4 acres of grassland eight miles east of Ardmore, and approximately 1.5 miles north of the Nebraska state line.

The call for that fire came in at 3:41 p.m. On Wednesday, July 1, and was ruled contained by Federal, State and Local crews by 6 p.m. that same night. It is being officially listed as human-caused, however no other additional information about the cause was available.