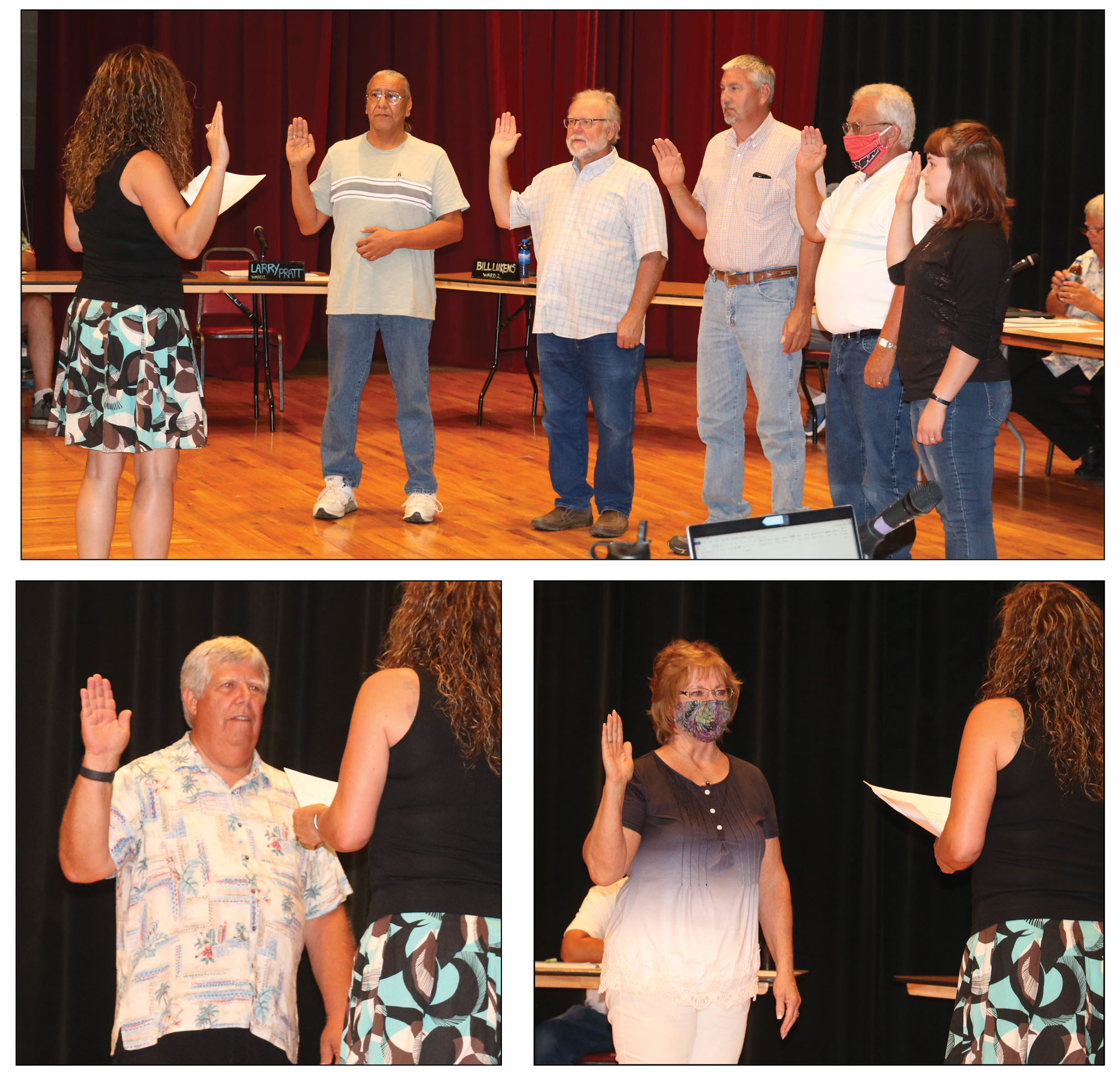 BOTTOM RIGHT: Debra Johnston was appointed to the vacant Ward 4 seat and will serve for one year.

HOT SPRINGS – This past Monday night’s Hot Springs City Council meeting at the Mueller Civic Center featured the swearing in of a new mayor, along with six councilmembers – four of whom earned their seats after being unopposed in the recent June election, one who won her June election, and another who was appointed.

Bob Nelson, who has been serving the residents of Ward 4 as their councilman for multiple terms, is the town’s new mayor, replacing George Kotti who served for two 2-year terms. Nelson earned the mayorship as the only person who submitted a nominating petition this past spring.

Also being sworn in for full two-year terms on the council were Larry Pratt (Ward 1), Bill Lukens (Ward 2), Johnny R. Huddleston (Ward 3) and Caitlin Turner (Ward 4). Pratt and Huddleston are both newcomers to the city council and earned their seats by being the only ones who submitted nominating petitions this past spring and thus were unopposed in the June election. Lukens was also unopposed in the recent June 2 election, but was the incumbent for the seat after earning it unopposed two years ago as well.

Turner is actually the only councilmember sworn in Monday night who earned their way onto council after winning an election, when she defeated challenger Debra Johnston on June 2. Turner, the incumbent in the recent election, was appointed to the vacant position last year.

Also being sworn in, but for only one-year terms, were both Wes Grimes (Ward 3) and Johnston (Ward 4). Grimes was unopposed in the June 2 election, while Johnston was appointed to the seat after a unanimous vote of the all the other councilmembers after they were sworn in.

The mayor noted that his intent was to reduce the previous number of committees, which he did by one when he eliminated the need for a Fire Department committee. He said communication with the fire department would still be maintained through the budget process.

In other regular council business, a public hearing was held for a Use Permit on Review for a home owned by Carol L. Wilson, so that her tenant, Melanie Adcock, could operate a home preschool/daycare at 702 Houston Avenue in Hot Springs. She fielded a number of questions from council members about her plans, to which the councilmembers seemed satisfied with her answers.

A pair of neighbors – Cheryl Lathrop (904 S. Chicago) and Steve Gross (810 S. Chicago) – then expressed some opposition to proposed in-home daycare, citing the fact that Adcock was not living in the home but instead only renting it to run the daycare. Lathrop also expressed concern that the neighborhood in which she lives and where the daycare is being planned was not safe for children. Gross said that if the council approves the daycare, he would like to see the property fenced.

Another neighbor, Greg Foust (941 Houston) spoke highly of both Wilson and Adcock and said they have the best interests of the children and parents in mind with their plans. Dawn Johnson, who lives outside of the city limits, also spoke and said that if Adcock follows the state requirements as she has stated she intends to do, that the daycare will be safe.

The council ultimately approved Use Permit on Review by a 7-1 margin with Grimes submitting the only Nay vote. His dissenting vote was something the council heard a few times during the meeting, as he was also the lone Nay vote on the Second Reading of a Supplemental Appropriation Ordinance. He was also the only councilmember who voted in opposition of the city paying its Bills in Between, its Current Claims and its Wells Fargo Credit Card Claims. Grimes later stated that the reason he voted against the city paying its bills was due to the fact that he was not previously part of the council when those charges were incurred.

During Communications from the Public, the council heard from Hot Springs Police Reserve Officer Phillip Shively who made a good case for opening up Butler Park in the future for families to celebrate the Fourth of July by shooting off fireworks there.

Councilman Craig Romey noted that the park had been home to that in the past, but due to the mess left afterwards, it was discontinued. Shively responded by saying he would work on recruiting volunteers to help with the cleanup and would be willing to start an ongoing conversation with city officials to make it a reality by Fourth of July 2021.

Several councilmembers including Grimes, Lukens and Romey responded favorably to Shively’s request and expressed an interest in helping make it a reality as well.