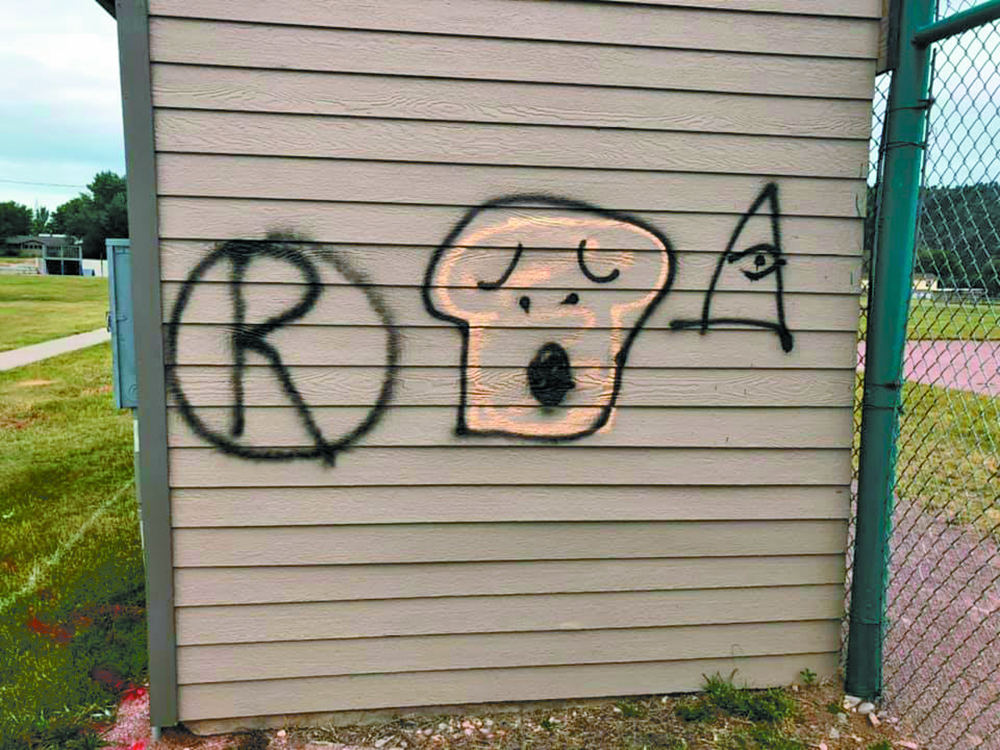 This is an example of the kind of vandalism that was discovered at Butler Park on the morning of June 30. City crews have since repainted over the graffiti. Currently, there are no suspects, but law enforcement is in the process of reviewing surveillance video from a residence near the area.

HOT SPRINGS – Hot Springs Police are currently investigating an act of vandalism that took place at Butler Park, early in the morning on Tuesday, June 30, likely between midnight and 4:30 a.m.

Police Chief Mike Close said his department was made aware of the incident after receiving a call at 6 a.m. the same morning from a concerned citizen who was reporting multiple images being spray painted on various pieces of park property. The vandalism located primarily on the west side of the park and included spray-painted images on both of the Minors Field baseball dugouts, on a trash can, on the brick bathroom near the playground and on the retaining wall of the skatepark.

Images were varied and included the letters BLM (presumably standing for Black Lives Matter), the numerals 666 (known as satanic symbolism), an image of a piece of bread that is assumed to mean “toasted,” the letter R inside of a circle (a registered trademark symbol), a smiley face and a triangle with an eye inside of it (a symbol for the Illuminati, also known as the all-seeing Eye of Providence).

Chief Close said all of the images together seem to be very random, and it’s unknown what the exact meaning the vandal was trying to convey in his or her destruction of the public property.

Law enforcement does not currently have any suspects in the case, however they are currently analyzing some surveillance video from a nearby landowner located on the south end of the park. Close said the video from a single location was not directly aimed at Butler Park, but it is hoped that some clues can be found in the video.

Close said they have also received a number of other tips from the public, but as of yet, nothing has turned up any substantial leads.

The vandalism however was quickly covered up, thanks to the work of city crews who immediately were able to paint over the graffiti the same morning it was discovered. Close said a baseball game was played late that night at the Park and all of it had been covered up before games started. Another image painted on one of the Butler Park signs was fixed by a community member, who volunteered their time to remove the paint with lacquer. The garbage can that was spray painted was just replaced, instead of painted over.

Close said the Butler Park vandalism was the only incident of its kind that has happened recently in the city limits. While its assumed the acts were done by a single person, based on their similarity in handwriting, Close said its still very possible that it was done by multiple people.

In regards to some spray-painted vandalism done near the viaduct in the middle of town several months ago, it’s not believed the two incidents are related. However, unlike the Butler Park graffiti that was repaired by city crews immediately upon their discovery last week, the graffiti on a pair of concrete viaduct retaining walls on the viaduct still remained visible to passers-by earlier this week.