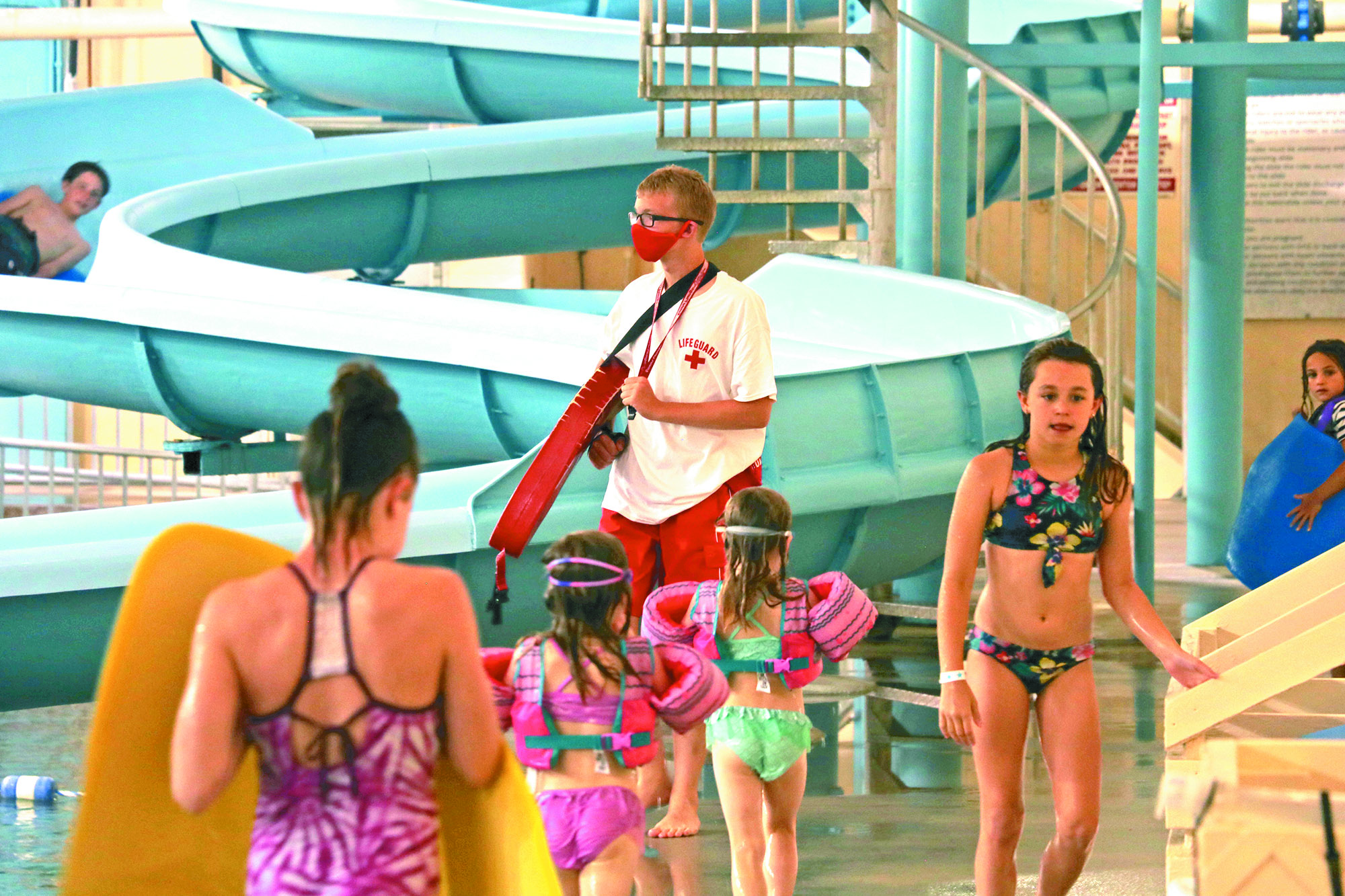 Evans Plunge lifeguard Michael Wainman wears a mask as he walks among patrons of the inside pool at Evans Plunge last week. While “roaming” lifeguards at the facility are required to wear masks, those sitting in their elevated chairs are not, manager Kris Hanson said.

HOT SPRINGS – Local tourist attractions are seeing a steady but not overwhelming amount of traffic thus far this season, and that’s a good thing, according to Evans Plunge manager Kris Hanson.

With a CDC-recommended maximum capacity of only 125 people combined between their two pools, Hanson said one of her fears of limiting customers was having to turn people away. Thus far, that has not happened.

Evans Plunge reopened their doors on Monday, June 15, after being closed since March 23 – nearly three months ago. Hanson said the closure took place just one week after they had already been shutdown temporarily to perform routine maintenance and planned updates.

They can normally accommodate up to 500 people in the two pools during a busy summer day, but Hanson said the amount of business so far has been good and has allowed the staff to not be overwhelmed while ensuring proper cleaning and social-distancing is being maintained. In addition to limitations in the pool areas, there is also limit of four people in the cardio room and eight people in the weight room. The Plunge’s health club – which includes the hot tubs and sauna – is closed and will likely remain closed until all coronavirus restrictions are lifted.

With last week’s reopening came a number of new scheduling practices and safety procedures at the Plunge. Hanson said they are now open from 6 a.m. to 10 a.m. daily for members and punch-card holders only. They then close for one hour to perform cleaning, which involves an “all hands on-deck” disinfecting of all touchable surfaces. She said there are typically eight to nine staff members working at the time of this cleaning, and all chip in to do their part.

The Plunge reopens to everyone at 11 a.m. and remains open until 4 p.m., which is when another one-hour closure occurs for disinfecting. They reopen again at 5 p.m. until 7 p.m., which is followed by another disinfecting by the nighttime janitorial staff.

Overall, while Evans Plunge has enough staff to maintain its planned schedule, Hanson said they are in need of more lifeguards. She said they currently have six lifeguards on staff, but would ideally have 10 on staff. With things being as they are, if a lifeguard calls in sick, they may have to close one of its two pools due to not having enough.

While most all public pools use chlorine and other chemicals to help keep their water safe, the Evans Plunge does not have this need due to its spring-fed flow rate of 5,000 gallons per minute, which refreshes the entire pool every one and a half hours. And while it is unproven that coronavirus can be transmitted through water, Hanson said they are taking immense precautions of it being spread outside of the pool, which includes providing sanitizer near equipment and requiring its use before getting on things like the rings.

Evans Plunge is one of the only public swimming pools currently open in the Black Hills area, with only the YMCA-operated outdoor pools in Edgemont and Custer also planning to be open this summer. Hanson said Rapid City announced they would not be opening any of their pools, a decision she feels is financially-based considering all that is involved with opening and operating a pool.

Despite those financial concerns identified by other Black Hills communities, Hot Springs’ city-operated, mineral-springs swimming pool is open and ready to go for the summer – in part because of the identified benefit it has to the other businesses in town.

One nearby dining facility saw an immediate boost in business after the Plunge reopened on Monday, June 15.

Don Zon with Red Shed Smokehouse, a mobile food vendor located in the city-owned lot across from the Evans Plunge parking lot, said they were already enjoying an even better summer than last year – in part due to a new location, and also their business model of outdoor or take-out dining. But with the opening of the Plunge just four days prior, they had already seen a 25 to 30 percent uptick in their sales.

Zon mentioned they had also recently changed their business hours to Tuesday though Friday from 11 a.m. to 7 p.m, and Saturdays from 11 a.m. to 4 p.m. He also noted that due to previously paying for a vendor space in Custer during the upcoming 80th Sturgis Motorcycle Rally, they would be temporarily moving out of Hot Springs for 10 days.

He said the financial commitment was made prior to them being allowed to set-up on the city lot by the Plunge, and he “feels bad” about leaving Hot Springs temporarily – especially after how supportive the city and its residents have been. They will however be back in town after the rally, and likely open until around the first week of November.

Another Hot Springs attraction which had a delayed start to their season this year was The Mammoth Site, which reopened to the public back on May 22.

Now after a full month of being open to the public, COO/Business Manager Presston Gabel said business is understandably down in comparison to last year, but they have been steady and seeing a recent gradual increase as more and more placed around the Black Hills begin opening back up.

They too have implemented a number of new procedures and modified their normal practices by suspending their guided tours, but instead suggesting to patrons that they download their self-guided tour app or use their self-guided pamphlet. Gabel said they have also installed lots of new signage in the bonebed area which points to and explains features that are normally highlighted by the tour guide.

Because of the large size of their facility and ability to easily social-distance, Gabel said they have not had the need to establish a maximum capacity inside.

Something that both the management of The Mammoth Site and the Evans Plunge shared about their patrons, is how understanding and thankful they have been.

“The tourists have been so incredibly kind,” Hanson said, as she described how appreciative everyone has been that they were open. She said the locals have also been very thankful to have the opportunity to come back into the facility, especially now that they have their own dedicated time in the mornings.

Gabel said they have experienced the same appreciative reaction from their patrons at The Mammoth Site. He also added that they’ve been getting a lot of out-of-state visitors from areas where lockdowns are still being enforced, such as Minnesota, Colorado and from further places like Texas and New Mexico.

Another nearby attraction which is, and has been, dealing with issues effecting visitor access since June 29, of last year, is Wind Cave National Park.

In addition to the COVID-19 precautions that all tourist attractions are learning to deal with, Wind Cave shut down their tours last summer due to needed elevator repairs.

According to a recent post on their website, on June 8, the park contracted with a Texas company to complete the needed repairs. Their reps made a site the week of June 15 and will have a 90-day window to complete the work (September 7th, Labor Day).

Their website went on to say, “A more difficult question to answer is, When will tours resume? For the safety of visitors and rangers alike, we won’t be offering tours until CDC rules on social distancing are relaxed.”