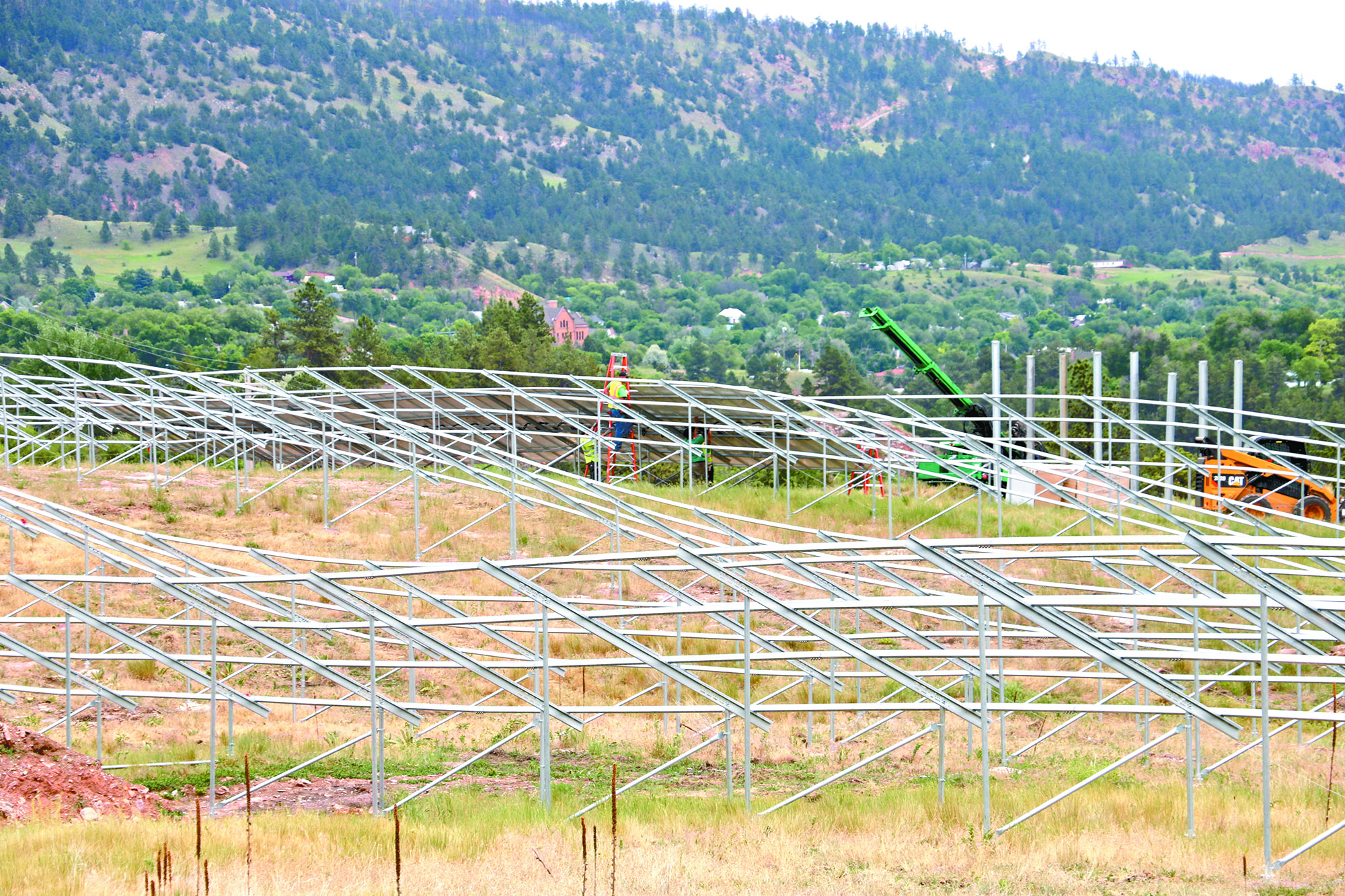 A large network of solar panel mount stands are spread out in five rows over nearly four acres of land located on the northwest end of the State Home’s 198-acre campus. When completed, these now bare stands will display a total of 1,080 solar panels, each approximately 3-feet wide x 6-feet tall.

HOT SPRINGS – The South Dakota State Veterans Home in Hot Springs is considered state-of-the-art in many ways, not only for how it cares for the state’s Veterans in the new, home-like setting of the Michael J. Fitzmaurice Building, but also in how it generates and consumes energy.

In addition to the current State Home’s wood-chip burning Bio-Mass System – which has reduced the facility’s energy cost for heating/cooling by nearly two-thirds compared to the old system – they will soon also be able to add solar energy to their list of “green energy” credentials.

According to both Tom Inman, Physical Plant Manager II of the State Home, and State Engineer Steve Mezger, the fact that South Dakota’s State Veterans Home has both of these is something very unique in the nation and is something of which local Hot Springs residents should be very proud.

The cost of the solar project is around $548,000 and is anticipated to have an approximate 13-year payback in energy cost savings, while being operational for 30 to 40 years. GenPro Energy Solutions of Piedmont earned the state bid and is the company currently installing the system.

Inman said the State Home’s solar project, which should start producing energy by the end of July, has been in the works for about two to three years. Approved officially last year, he said it falls in-line with Gov. Kristi Noem’s desire for increased alternative energy use by state institutions and is one of several projects underway across the state. Other projects include some involving National Guard buildings, Black Hills State University (BHSU), as well as small, passive solar heating system at the SD-DOT facility near Edgemont.

Once completed, the State Home’s non-storage, direct-feed 372 KW solar project will provide about 50 percent of the electricity being utilized in the new Michael J. Fitzmaurice building. In comparison to some of the other state solar projects going on currently, it’s not the biggest but also certainly not the smallest.

According to Project Manager Halona Gardiner with GenPro, a current roof-mount project at BHSU is larger at 930 KW, but both are considered small compared to some that GenPro has done in other surrounding states. She said they recently constructed some in Nebraska that are 2 to 5 MW (megawatt is equal to 1,000 kilowatts).

What does make the State Home’s project unique to some of the others that GenPro has done for the State of South Dakota is that it’s ground-mounted.

The project is being built on nearly four acres of state-owned land found on the northwest corner of the State Home’s 198-acre campus. Inman said the land was once part of the grazing pasture used by the State Home’s dairy cattle, when it operated a dairy farm many decades ago.

The rolling topography and rocky terrain makes it unsuitable for many other uses, which also created some challenges for GenPro to install the system.

Gardiner said her company hired an outside firm to drill six-foot long screws into the ground and also use dynamite to blast rock in some areas. The rolling terrain also requires the use of varying lengths of mounting hardware – up to a 20-feet difference in some locations – to keep the panels at a similar height.

Because of the terrain, when completed, Gardiner said the panels will not all appear flat with one another and thus will actually take on the look of a “rolling flag,” which is quite appropriate for providing energy to a facility that his home to our nation’s veterans.

Gardiner added that the construction of the project has certainly taken the interest of the State Home residents, as many of them have walked or driven up to check out the project and ask questions.

Situated just a few hundred yards out the back door of the home, there are a total of five rows of solar panels featuring a total of 1,080 solar modules that are each 39-inches wide x 77-inches tall, all of which are tilted at a 30-degree angle. Each row varies with the amount of panels due to the terrain.

Despite the topography creating some challenges, Gardiner said the land is ideally situated and facing south, which will provide “a lot of energy, year-round.”