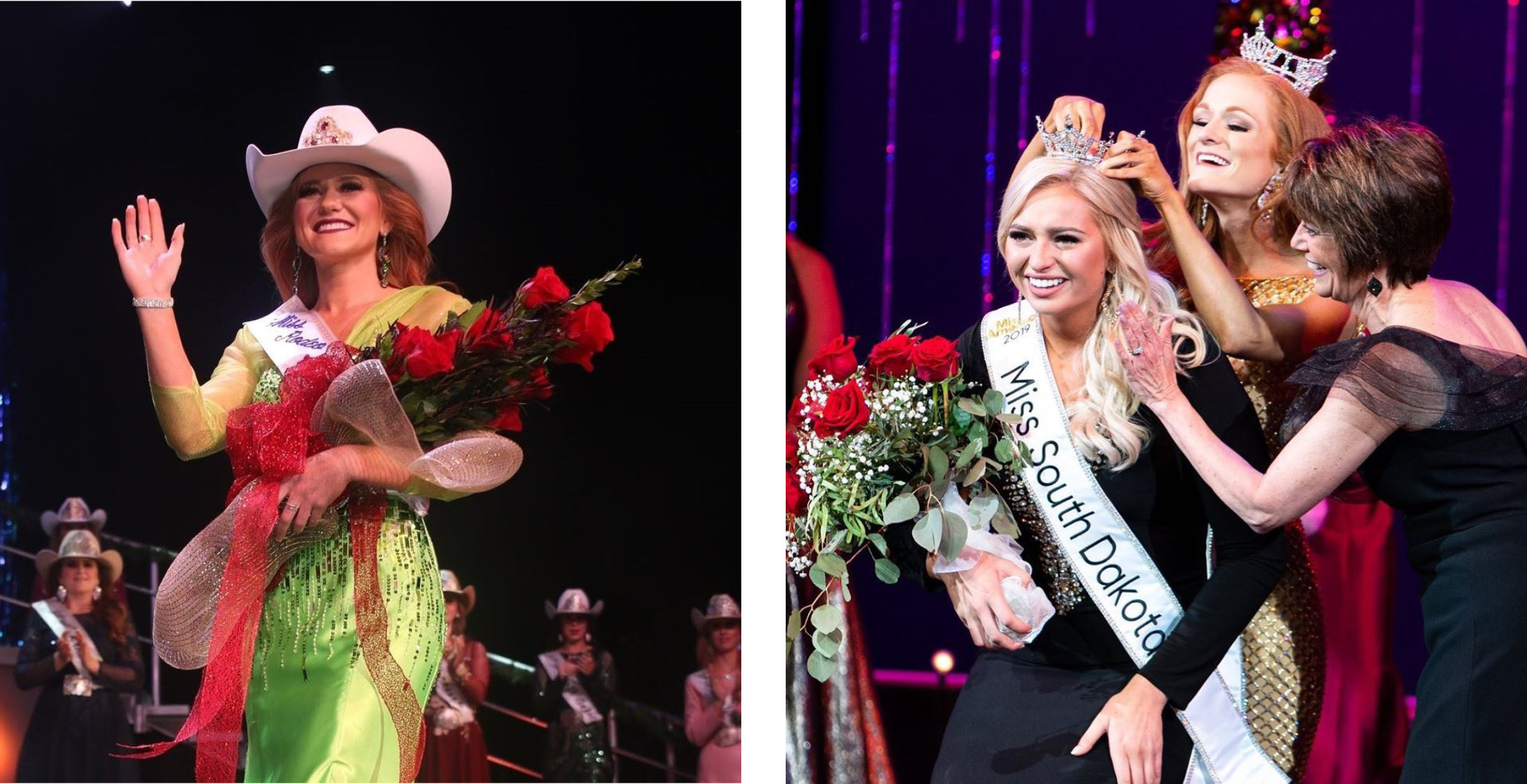 LEFT: Jordan Tierney of Oral, who was crowned Miss Rodeo America during the National FInals Rodeo in Las Vegas last December, will retain her title for another year and not crown a new national winner until December 2021.

RIGHT: Amber Hulse of Hot Springs, who was crowned Miss South Dakota in Brookings in May 2019, was also told recently that she too will hold onto her title following the cancelation of the 2020 Miss America and Miss South Dakota competitions, orginally scheduled for later this year.

HOT SPRINGS – The fact that a pair of Fall River County women held the titles of both Miss Rodeo America and Miss South Dakota at the same time, already made 2020 a special year in the world of pageantry.

But due to the widespread impacts of COVID-19, both local ladies will be retaining their titles for yet another year – making 2021 equally as special, but hopefully even more rewarding.

Miss Rodeo America Jordan Tierney of Oral, who was crowned in Las Vegas in December 2019, and Miss South Dakota Amber Hulse of Hot Springs, who was crowned in Brookings in May 2019, both recently learned of their organization’s decision in the past few weeks. While both said they are honored to have the titles yet again, they each also expressed an understandable slight hesitation in taking on the responsibilities of those titles for two full years.

The official announcement that Tierney would be retaining her Miss Rodeo America crown for another year came on May 27, which she said was about five days after the organization had contacted her to see if she was willing to do so.

Tierney said as more and more organizations – like Miss America 2.0 and Miss Rodeo Canada – were making similar announcements, she was not surprised when she got the call and was somewhat prepared to answer the question.

“Prior to the leadership in my organization making the decision to extend my reign, I was very content with whatever choice they would make,” Tierney said. “I had the most incredible year in 2019 as Miss Rodeo South Dakota and the relationships and memories I made I am so grateful for. Although with the unusual circumstances caused by COVID this year I am so blessed to get another year as Miss Rodeo America to have the full experience.”

While it is certainly an honor to hold the title for another year – which should allow her a chance to do all of the things she missed out on this year due to the pandemic – the downside is how having the title again prevents her from moving on with her life and career without the crown on her hat.

According to Tierney’s scheduler, DeShannon Davis, who handles all of her appearances, Miss Rodeo America travels some 100,000 miles during the year of her reign, appearing at nearly 100 rodeo performances. In addition, she also does several appearances at schools, civic groups and other special events, educating the public and creating awareness about the sport of rodeo, its sponsors, and its opportunities.

Tierney said what helped make up her mind to hold the title for another year was a discussion she had with her dad Paul.

“I was out with my dad and proposed the idea to him, and he said, ‘when you’re my age and you look back, two years is not a long time,’” Jordan recalled, and then said “it will go by fast.”

When the pandemic hit the United States and began canceling several national events in March, Tierney was in Houston, Texas, at a near three-week-long event, which was canceled about half-way through. She then returned home to her family’s ranch in Oral and has been there ever since.

The amount of things she’s missed out on as Miss Rodeo America has been huge, she said, including such notable events like the RAM National Circuit Finals in Kissimmee, Fla., as well as trip to Africa to visit U.S. troops at a military base. While it’s still unknown at this point, her hope is that she will be able to all of those things instead next year.

Other closer events she will be attending include the Days of 76 in Deadwood, as well as a pro rodeo in Wall later this summer.

With Tierney retaining her title for another year, it also means that all of the state’s various Miss Rodeo titleholders will also be doing so as well, and have to wait another year before they can compete for the national title.

“I have a tremendous amount of respect for each one of them, who are putting off aspects of their life as well,” Tierney said, as she described how the responsibilities of having a state title also oftentimes prevent a woman from getting a job or going to college.

While the 2020 Miss Rodeo America contest in Las Vegas has been canceled for the upcoming winter, Tierney said the National Finals Rodeo (NFR) is being optimistic that the rodeo itself will be held at the end of this year. She said that the mayor of Las Vegas is very “pro-get open,” and added that the NFR is looking closely at what the National Football League (NFL) does this year.

“First and foremost, my focus is on finishing the second half of 2020 strong and in the best way possible, then hit the ground running for 2021,” Tierney said. “I understand that many young women dream of having this title, so the fact that I get to represent the title for two years is an honor. I am just so blessed to represent the title of Miss Rodeo America, Professional Rodeo and the Western way of life until the end of 2021.”

For the current Miss South Dakota Amber Hulse, her crowning was already seen as historically significant this past year, as it marked the first time in the competition’s then-73 year history that the winner was crowned in another town other than Hot Springs. But appropriately so – the winner was at least from Hot Springs.

“I knew from the moment that sparkly hat was placed on my head, this year would be unlike any other,” Hulse said recently. “Back in June of 2019, I was already making history as the first-ever Miss South Dakota crowned in Brookings, SD, taking place under the new Miss America 2.0 format, meaning I was the first Miss SD to be crowned without competing in swimsuit.

After making various appearances around the state since last May, and competing for the title of Miss America in December 2019 in Uncasville, Conn., Hulse was living in Sioux Falls.

At that time of her reign as Miss South Dakota, she was taking online classes at the University of South Dakota and also driving two days a week to Vermillion to also attend some classes in person. Shortly thereafter, those classes were also moved to online-only as the state’s universities closed their campuses due to COVID-19. She then moved back to Fall River County in April, and into one of her parent’s hunting lodges.

Because of the usual winter ‘slow down’ and the fact that she was still a student, Hulse said her appearance schedule was reduced anyway during January and February. One of her final appearances before ‘life as we knew it’ changed was in March in Sioux Falls, which was also attended by Miss America 2020 Camille Schrier.

Hulse said it was then up to each state to determine how they wanted to move forward. South Dakota, along with most of the other states, decided to not have a competition this year and then extend the reign of their current titleholder another year. A few states however, Hulse said, selected an arbitrary date on which the current titleholder’s reign would end, and then not have a titleholder until a new one is crowned next year.

“As some of my Miss America sisters have put it, we will all forever be the answer to multiple trivia questions,” Hulse said. “When you win, you know your name will forever appear in the yearly, keepsake program books, “2019, Amber Hulse”. No one could have ever anticipated the asterisk which will be added next to the name of every Miss America Organization representative in the country stating “2019-2020, due to COVID-19 pandemic”.

While she is excited knowing that she will be able to represent her state, and her hometown of Hot Springs, for another year, Hulse did acknowledge somewhat of a downside that includes an additional year of responsibilities which could interfere with her educational and career goals.

However, she said that since one of the hallmarks of the Miss America and Miss South Dakota organizations is to promote and support career goals, they are being very respectful of their titleholders’ intentions to continue with school or get back to their careers full-time.

One of the overall positives which may come about due to not having a Miss South Dakota competition in 2020 is the fact that it may mean even more competitors for the 2021 title.

Hulse said that since all of the current local titleholders will also retain their crowns for another year, the local pageant organizers are being encouraged to create new titles and crown more competitors.

The 2021 Miss South Dakota competition is currently planned to be held May 27-29 in Brookings.

An event coming up in Hot Springs that is being held partly due to the annual cake auction not being held this past spring, is an Outdoor House Concert at the home of Pat DeSmet, who is the longtime ‘sound man’ for the Miss South Dakota Scholarship Competition when it was held in Hot Springs.

The concert, being held outside for social-distancing precautions, is Sunday, June 28 at 3 p.m. and will feature Hulse as the main entertainer, along with five other former Miss South Dakotas and also some candidates for Miss South Dakota 2021. It is a fundraiser for the organization, so the suggested minimum donation to attend is $15 per person.

Those who would like to attend and support the scholarship program are being asked to email Pat DeSmit for more details and directions. The address is This email address is being protected from spambots. You need JavaScript enabled to view it..