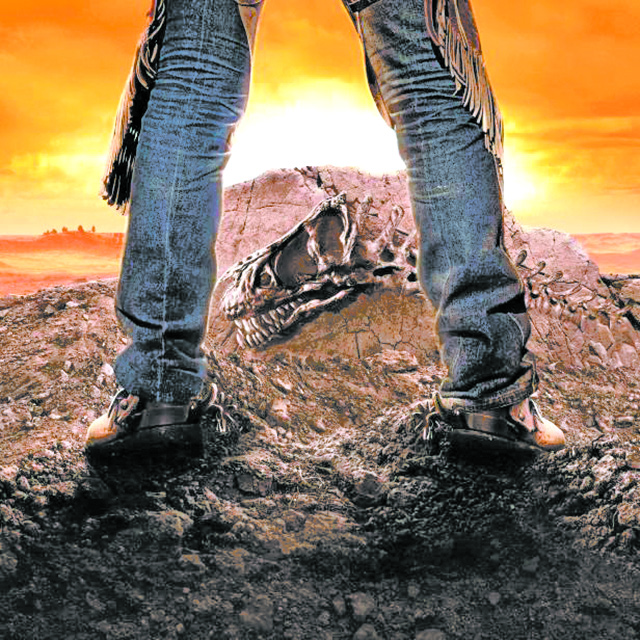 NEWCASTLE, Wyo. – Every Friday night, from now through July 24 at 7 p.m., television viewers who tune-in to the Discovery Channel will be treated to a new regular docuseries about the hunt for prehistoric fossils which will feature, among others, a pair of local faces as two of the program’s stars.

Mike Harris, 67, and his son Jake Harris, 42, both originally from Hot Springs, operate the Wyoming Dinosaur Ranch near Newcastle, Wyo., which in addition to a cattle ranch, is also a retailer for authentic fossils and mineral specimens.

Last year, a film crew from Half Yard Productions began following the Harris men for the Discovery Channel’s “Dino Hunters,” which debuted on Friday, June 19. The program focuses on a group of ranchers and cowboys in the badlands of Wyoming, Montana and the Dakotas who are uncovering valuable dinosaur bones on their land and using the discoveries to help save their livelihoods with a possible payday that could be worth millions.

But, according to the information released about the new docuseries, if they are unable to excavate the finds before the harsh winter bears down, they risk losing the fossils to erosion, turning their potential fortune to dust. Their finds range from T-Rexes and Triceratops to a Nanotyrannosaur, a rare and disputed dinosaur species that may have scientific impact well beyond the series.

“Dino Hunters” uses a combination of 3D modeling and Computer-Generated Imagery to create X-ray visualizations of both the fossils and the dinosaurs. The images reveal what the dinosaur looked like, how they moved, and other important characteristics of these prehistoric giants.

On the Discovery Channel’s website, it describes Mike “Cowboy Rex” Harris as a true cowboy and businessman who has kept himself busy working since he was a kid. When he stumbled across a triceratops horn on his pastureland about 20 years ago, he realized there was more to ranching than cattle. In 2011, he found a T-Rex worth millions; its sale could pay off his ranch, but it’s hard to find a buyer with that kind of cash—so “Cowboy Rex” is still on the shelf. While he hunts for a buyer, he’s hedging his bets, prospecting for another big dinosaur that could bring the payday he needs.

The Discovery Channel website also says, that “with a father like Mike Harris, it’s no wonder Jake Harris has spent his whole life trying to catch up to his dad. After spending eight years as a teacher, Jake returned to the ranch to work alongside the person he admires most. More manpower expedites the cattle work, freeing up precious time to pursue what they love most—hunting for dinosaurs.”

Other stars of the “Dino Hunters” program include Clayton Phipps of Montana, Aaron Bolan of Wyoming and Jared Hudson of South Dakota.

The Harris’ ranch website coins nicknames for Mike as “Cowboy Rex” and for Jake “Cretaceous Cowboy.” The two also recently posted a video on the Facebook page which showcases their excitement for their new Discovery Channel program.

“Very few people have the opportunity to dig dinosaur bones on their own ranch, and we want to share it with the world,” Jake told the followers of their Facebook page.

“I think you folks are really gonna enjoy what we’ve got to bring too,” said Mike Harris, in relation to their upcoming show. “It’s pretty informational stuff and pretty cool when you’re the first person to lay eyes on something 65 to 70 million years old.”

Jake said the two of them are self-taught about dinosaurs but have had the backing of professionals that have come out to their Wyoming ranch over the years and watched the things they’ve been doing. “It’s just amazing,” he said.

“It’s probably one of the most fun things I have done in my 67 years of life,” Mike said.