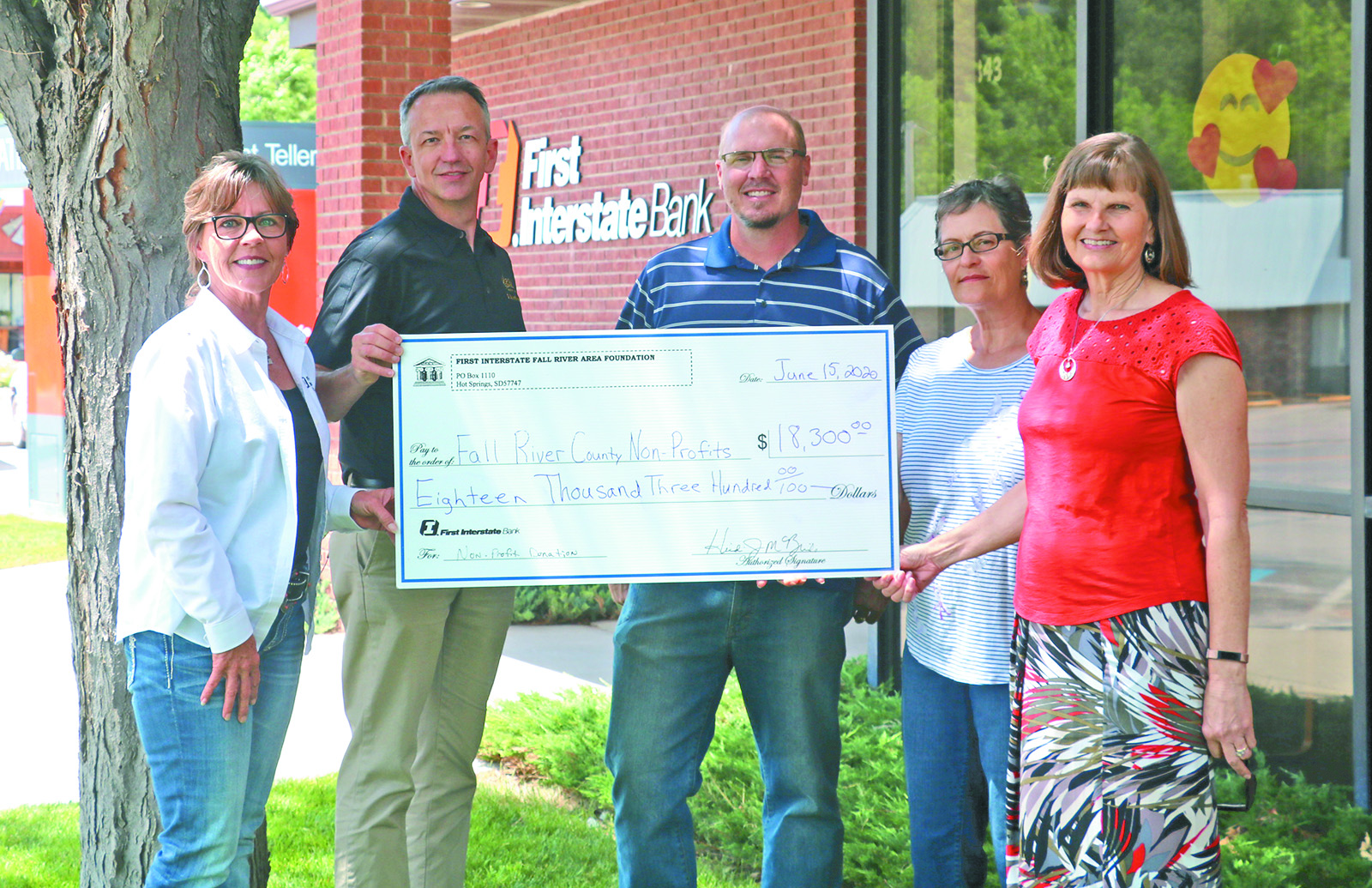 PHOTO: Members of the First Interstate Fall River Area Foundation Board of Directors hold up a check for $18,300 which they will divide up amongst six different local non-profits. Pictured from left is Heidi McBride, Dallas Wilkinson, Brett Nachtigall, Shirley Green and Barb Miller. Board members not pictured include Rita Fraune, Steve Wynia and Bill Schaefer.

HOT SPRINGS – For one of the first times in its recent history, the First Interstate Fall River Area Foundation was able to fully fund all of the grant applications from this year’s campaign.

A total of $18,300 – the most ever – was granted to six different Fall River County organizations. In addition, another $4,000 from a separate fund was also donated to two other groups to fund COVID-19 related needs.

The Edgemont Trap Shooting Club, which has been in existence since 1994, is currently working on repair and landscaping project for its public membership trap shooting range north of Edgemont. The funds received from the Foundation will offset 30 percent of their total project.

The Fall River Historical Society, which maintains the 1893 Sandstone School House, received funds this year to help renovate the fourth floor of the Pioneer Museum. The floor has been used as storage but the plan is to clean it up and perform repairs so that it can display some paintings donated by the family of Charles Hargens.

The Oelrichs Rodeo Association received funds this year to assist in the purchase a new steel crow’s nest which will also include stairs, windows and doors. Currently, the crow’s nest, which is in a state of disrepair, is accessed by a ladder. Labor for the installation will be volunteer.

The Southern Hills Futures Foundation is a local non-profit committed to securing, managing and acquiring real estate to advance higher education, research and economic development. They received funds this year from the Foundation to pay for upgrades and improvements to the former State Vets Home Building #1, which they acquired a couple of years ago.

The Hot Springs Bison Booster Club received funds from the Foundation for the purchase and application of graphics to be placed on the three Hot Springs School District vehicles – two passenger vans and a suburban – to promote Bison athletics when teams take the vehicles to sporting events.

Fall River Health Services also received some assistance from the Foundation to cover some expenses associated with an affiliation fee for its Rock Steady Boxing Fall River, which is an exercise program that assists patients with Parkinson’s.

Also receiving funds this year from the First Interstate Fall River Area Foundation was the Hot Springs Farmer’s Market Association and The Mammoth Site. Both organizations received assistance in relation to COVID-19. The Farmer’s Market will be purchasing personal protection equipment, while The Mammoth Site received funds to purchase additional 3-D printing equipment for the production of protective masks to be worn by healthcare workers.