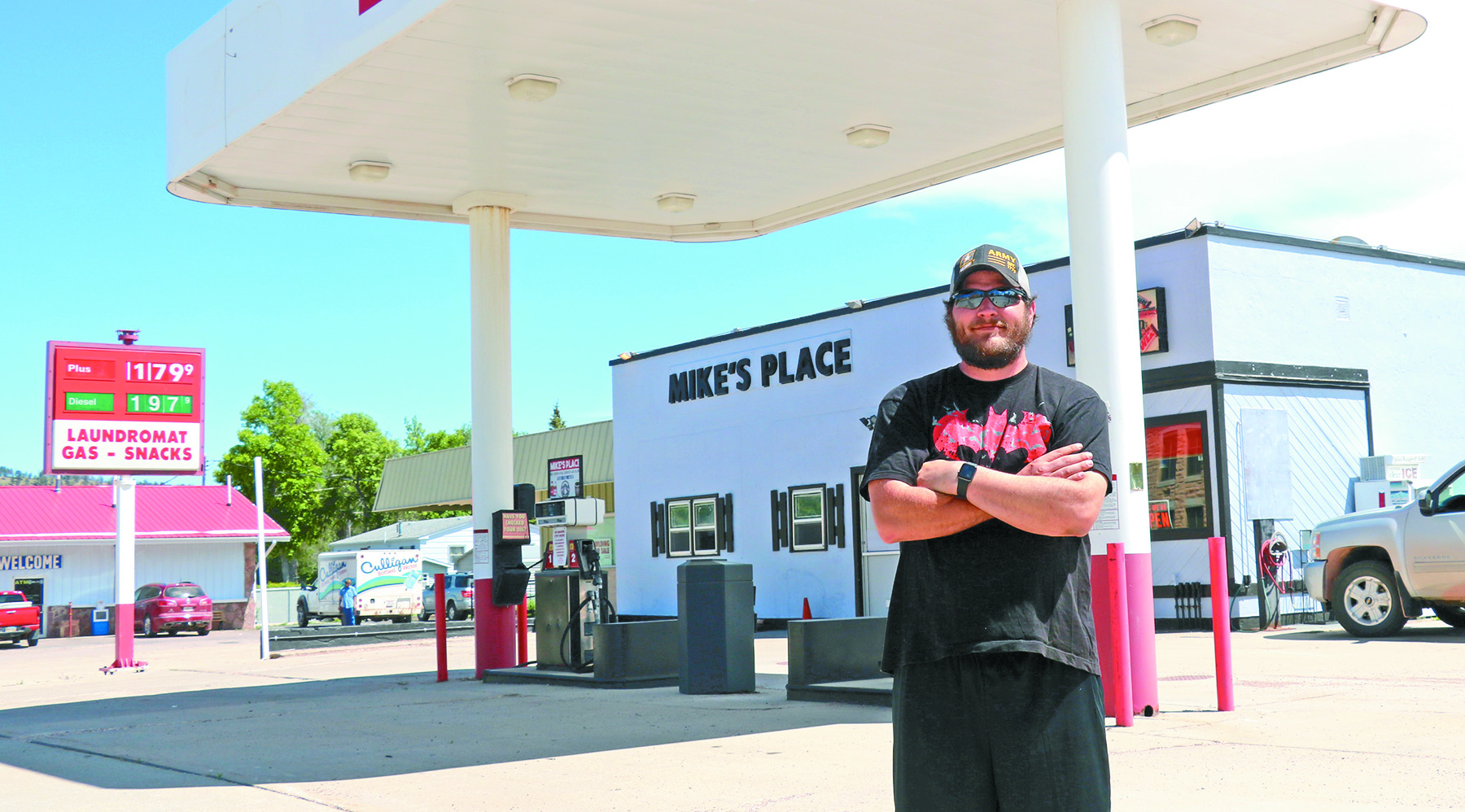 Steven Peplau, the new operator of Mike’s Place on University Avenue, stands in front of his establishment last week. He reopened the business on June 1.

HOT SPRINGS – Fuel, including full-service fuel, is once again available on College Hill in Hot Springs with the reopening of Mike’s Place at 1645 University Avenue.

The new proprietor’s name may not be “Mike” but, Steven Peplau says he plans to keep the name the same and is very proud to be the only independently-operated fuel station in the community, which was also the case when Mike Thompson ran it for many years. The building itself is still owned locally by Sean and Lori Wieseler, but Peplau began leasing the property from them back on May 1 and opened officially on June 1.

Peplau, 35, is a native of the Mankato, Minn., and has lived in Hot Springs for the past two years after moving down from Lead, where he had lived since 2017. Prior to taking over operation of Mike’s Place, he worked two seasons for Roy Reitenbaugh, at Roy’s Black Hills Twin Drive-In Movie Theater, who is his girlfriend Correna’s father. Peplau’s parents still live in Minnesota, as do his twin brother and another older brother. He said he also has an older sister who lives in Tennessee.

A disabled U.S. Army Veteran of Operation Iraqi Freedom (OIF) and Operation Enduring Freedom (OEF), Peplau said he takes great pride in being a veteran and operating a business in South Dakota’s “Veterans Town.” He added that he is a patient of the Hot Springs VA and described the care he has been receiving locally as “excellent.”

After getting out of the military, he said most of his job experience has been in retail or at service/gas stations. He said it has actually been a lifetime dream of his to be a business owner, especially a gas station.

Peplau said the opportunity for him to reopen Mike’s Place came about by chance when he ran into the previous owner, Sean Weiseler, and they discussed the idea of him leasing the business from them. The Weiselers had closed down the business last year, while at the same time selling the other gas station, Battle Mountain Convenience Store, to M.G. Oil which changed the name to Corner Pantry.

Peplau said he has the opportunity to purchase the building after a year of leasing it, which is his goal. He and a friend, who is a disabled Vietnam Veteran, are currently utilizing their VA disability pay to fund the operation.

His plan thus far has been to start slow by offering only fuel and a few convenience items like fountain pop as well as a couple of cooler of other cold refreshments with bottles of Pepsi and Coke products, but more and more things are being added weekly. Eventually he will sell hot dogs and other hot food items, along with frozen treats. His goal is to have much of that implemented later this summer, but for certain by the hopeful start of school in the fall. Located directly across from the high school, Mike’s Place has traditionally been a popular place for students and teachers to purchase snacks before and after class.

Peplau said he was always taught to take care of his elders, which was the main reason why he is offering full-service fuel to those who want it. He said that is available at the pump closest to the front door.

“That’s just my way of me helping my community,” he said, while adding that the more the community can support him, the more easily he will be able to grow and offer more things.