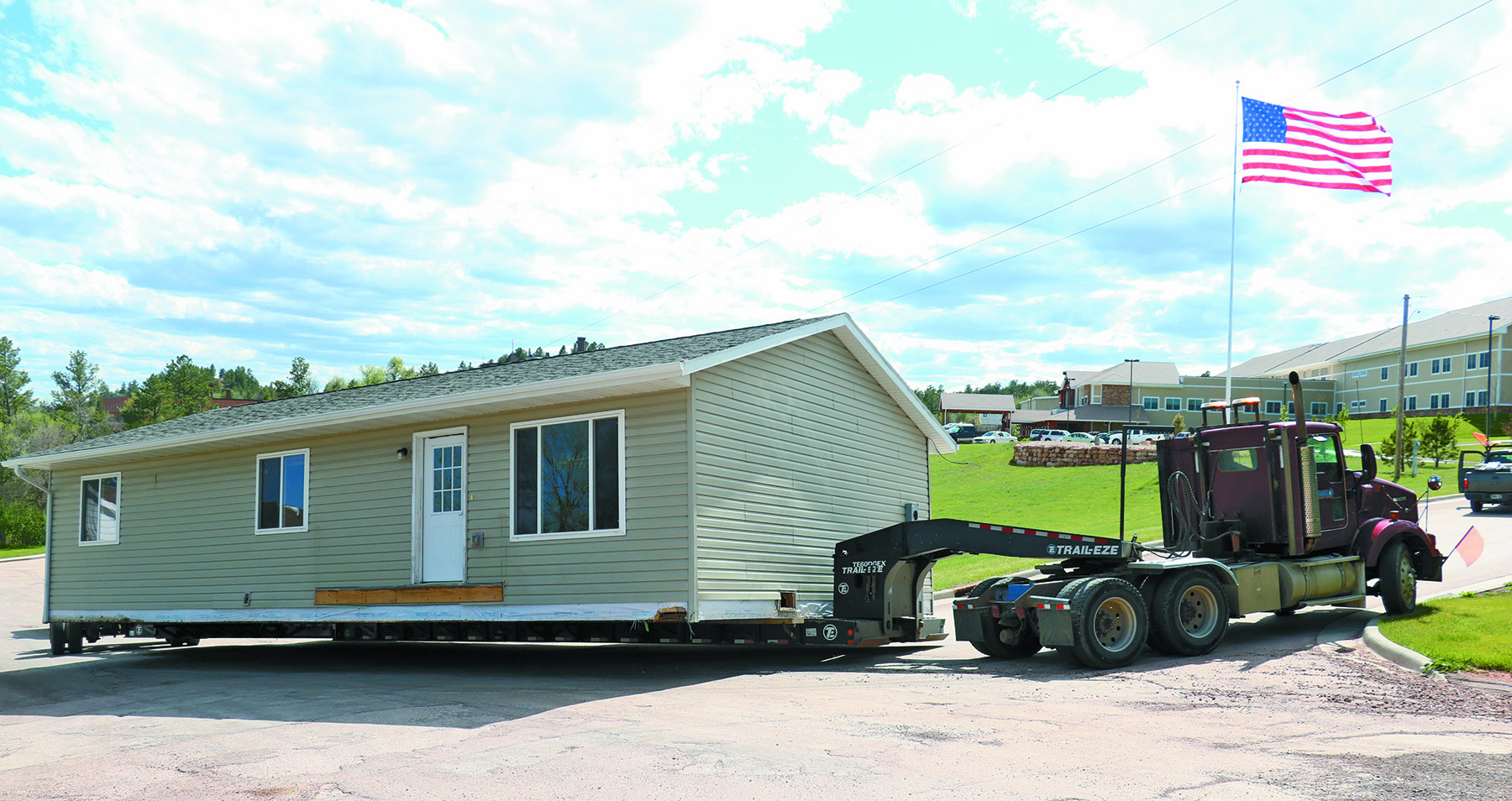 A semi truck carrying a surplused Governor’s House from the STAR Academy rounds the corner in front of the State Veterans Home in Hot Springs last Thursday, May 21. The home was later set on a foundation on State Home property on the northwest corner of the grounds. It will be one of three Governor’s Houses located on a cul-de-sac there.

HOT SPRINGS – The second – of what will eventually be four – Governor’s Houses arrived at the South Dakota State Veterans Home in Hot Springs last Thursday and placed on a foundation located in the northwest corner of the campus.

The houses are part of the State Surplus from the STAR Academy near Custer, according to Tom Inman, the Physical Plant Manager II at the State Home. The homes will be used for staff housing, which was their purpose at the state-operated STAR Academy as well.

The first Governor’s House was moved to Hot Springs the first week of May but wet weather delayed getting the second moved down until just last week. Inman said the third house is planned to come down in the next few weeks which will complete the three-home cul-de-sac in that area of the grounds. The fourth home is expected to come down sometime in the fall and be secured to a foundation in the southeast part of the State Home grounds along 23rd Street. The first two homes are three-bedrooms while the third home will have two bedrooms.

Inman said the constructing of the foundations for the homes were done through a state bid process, along with some other services. However, much of the work required to get them ready for staff to move into is being done by State Home personnel. He added that Bob Ezthorn, who is the current Physical Plant Manager I at the State Home has been involved greatly in the project. Ezthorn was the Physical Plant Manager II at the STAR Academy and was thus familiar with them when they were in use there previously.

All of the Governor’s Houses being moved to the State Home were built between 2006 and 2010.

Handling the moving of the houses from Custer to Hot Springs was done by the South Dakota Housing Development Authority (SDHSA), which is who is also responsible for moving the houses throughout the state from where they are built in Springfield.

The man overseeing the project in Hot Springs last week, said he had been a part of moving an approximate 2,100 houses in the past 15 years with the SDHSA.

Inman said the moving of the Governor’s Houses to the State Home is one of three significant projects currently underway on the campus. The first includes an egress project on the front of the historic Building 2, which has experienced some delays but should be completed in the next month or so. Much like the purpose of the Governor’s Houses, Building 2 is also now being utilized for staff and guest housing.

The other project underway is one being done by GenPro of Piedmont which will install a 400 kw solar field on the west side of the campus to help supplement energy use at the State Home. Inman said it spans about 3.5 acres and will included three runs of ground-anchored panels. Installation should begin in a couple of weeks and should be providing power by late July or early August.

A fourth project in the future will be the construction of an outdoor pavilion – similar to the large picnic shelter at Chautauqua Park – near the large flagpole. The site will allow State Home residents and staff an outdoor area to host various functions.