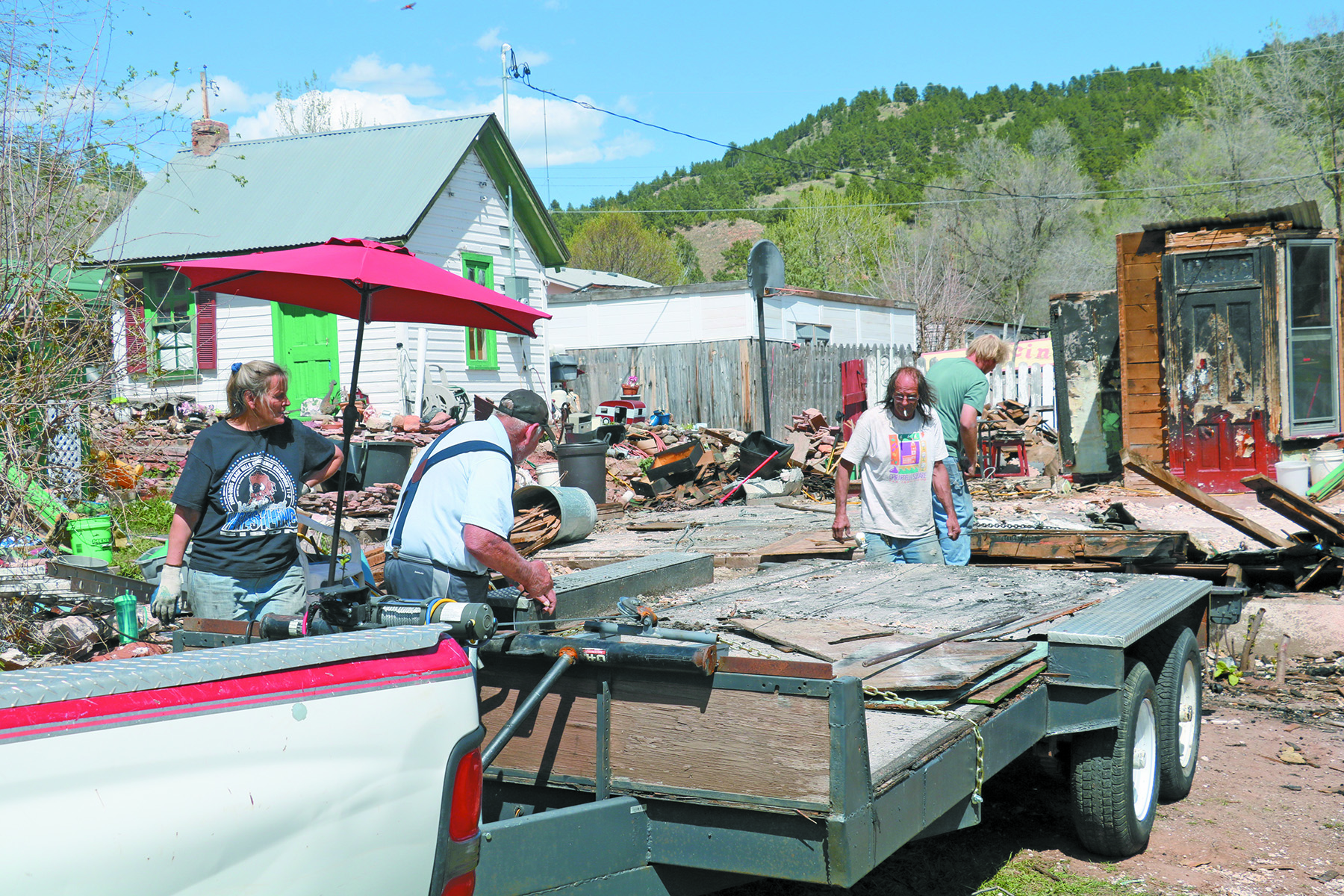 Julie Miller, far left, is joined by her dad Bob along with Glen Popescu and her son Beau as they get ready to load debris onto a trailer. Her dad Bob engineered a hoist onto the trailer for the purpose of tearing down Julie’s house which was destroyed by a fire on Nov. 25, 2019. Julie is currently living in the one-room “cook shack” visible in the background of this photo on the left.

HOT SPRINGS – Last year, on November 25, 2019, three days before Thanksgiving, Julie Miller and her family were awoken around midnight by the frantic screams of her grandson Blazen who suspected a fire in their house on Sheridan Street in Hot Springs.

The fifth-grader first hollered for his uncle Dustyn, Julie’s youngest then-19-year-old son, who then got everyone else up and called the fire department. Julie said that she initially thought the firefighters were going to be able to save her home of 11 years. But as she watched from across the street with the six other members of her family with whom she shared her house, she eventually realized it was all lost.

The Red Cross, neighbors and other friends in the community helped the Miller family immensely over the next few weeks and months with donations of clothes, food, money and a place to live.

The cause of the fire was determined to be an electrical problem in the kitchen. And while insurance did pay for the loss of her home and many of the contents, the most devastating aspect of an event like this is the loss of the things on which you cannot put a price. While all of the human residents of the home escaped without injury, Julie said they did lose a puppy in the fire as well as their 23-year-old cat Baxter.

For the past few weeks, Julie and her family have been working on cleaning up and tearing down the house themselves. The insurance money only went so far, she said, so they decided to do it themselves which also gave them a better opportunity to go through the debris, find those priceless items and also salvage some of the building materials of the historic home.

Julie, the mother of eight children, said her house used to be known as the Stagecoach House. Where she and her family resided was once the stage stop where travelers would lounge as they awaited their ride. A nearby outbuilding – which survived the fire – was the “cook house” and served as a storage for the Millers when they lived in the main building. That “cook house” however is now Julie’s one-room home and is where she is living.

Helping Julie tear down the house last week was her 80-year-old father Bob Prelle from Baird, Neb., who built a hoist on a trailer to pull down the walls and help carry them away. Also assisting was Julie’s son Beau and a friend Glen Popescu.

As of last week, they had filled three roll-off dumpsters and were working on the fourth, had taken three trailer loads to the dump in Edgemont themselves, and three more loads to recycling in Rapid City. Julie noted that one full load of medal scrap, including some appliances, got them only a mere $3.00.

Aside from financial savings of tearing down the house themselves, Julie said another motivating factor was the desire the salvage the unique trim work from inside the historic home.

Some of the valuable sentimental items lost in the fire, Julie said, included a Gibson guitar which her dad Bob gave to her on her 15th birthday. She said he actually bought it at a flea market when she was five-years-old, but he held onto it for 10 years before giving it to her as a gift. Julie also had a very large collection of colored glass items.

Some of the priceless items lost in the fire were the awards, medals and trophies that her eight very active and sports-minded children had earned over the years while growing up in Hot Springs. Whether it was wrestling, soccer, gymnastics, basketball, cross country – or you name it – for many years, it was hard not to find a “Miller” active in one thing or the other in Hot Springs.

Because the mementos of all those activities are now lost, Julie recently put out a request to families who had children competing the same time as her’s to possibly share some of their surplus awards with her children, if possible.

Despite the loss of many things in the fire, Julie did say that a number of things were surprisingly recovered as well. The first thing she mentioned was an old, antique print of a kitten which was her great-grandmother’s. She said she was moving a shelf while cleaning the burnt area, and there to her surprise was the picture in relatively good shape.

Another item was her son Dustyn’s old toy box which was made by her dad’s dad out of an old piano. She said her grandfather made it for her grandmother as a place to store her quilts. While it currently smells of smoke and is blackened some by the fire, Julie is hoping to clean it up for many more years of use and serve as a constant reminder – not only for what was lost, but also all that she still has.