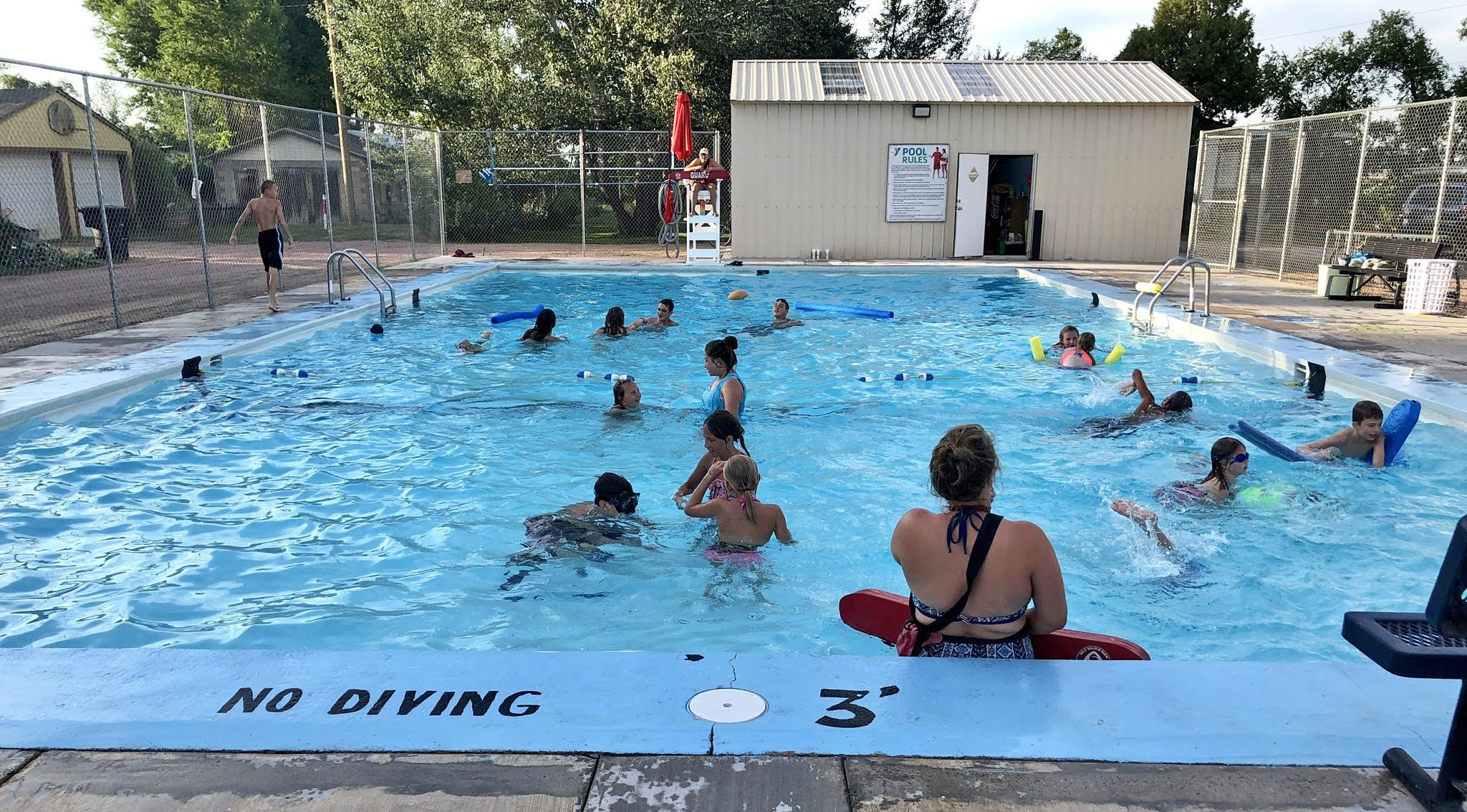 This photo taken during last year’s busy summer season shows the popularity of the Edgemont City Pool with local children.

EDGEMONT – At the Edgemont City Council meeting held Tuesday, May 19, Kelsey Trotter, YMCA Director, appeared to provide an updated contract with new language based upon a request by the board at the previous meeting. She provided a COVID-19 pool opening plan along with pertinent CDC information. She informed that all staff will be pre-screened before coming to work and that kids will be pre-screened before being permitted to enter. “We’ll be taking their temperatures as they come through the gate,” she said.

Bob Worden inquired, “How will you check their temperatures?”

“We will be giving the temporal thermometer, and the guards will be gloved when taking their temperature. And masks will be available,” responded Trotter. “We’re also encouraging them to shower before they enter the water. Also it is chlorinated and kept up to the correct balances in order to kill those germs.”

Trotter went on to state that they were hoping to open the pool somewhere between June 15 and June 22. She pointed out that Fall River County at present has one active case and that at this point there is no community spread.

Roger Horton spoke up and expressed concern about visitors from out-of-state and said that it has been proven that just one or two asymptomatic people could expose vulnerable people resulting in serious impacts on the town’s population.

In response,Trotter said, “That’s understandable. Last summer, we had one family from out-of-town using the pool that our lifeguards didn’t know who they were. We had all the people in town that were working on the pipeline, but they weren’t there a lot. As far as out-of-town people, not a lot stopped to use our pool. We’re really the place for the kids to go and have a safe space to be. There’s not really a lot else going on. The library will be closed until the third week of June until the carpet is re-done and things are put back in place. That will be one less thing for kids to do so there’s really not a lot else going on.”

Council member Jason Shook said, “I think we need to have something for the kids to do, that’s my opinion. There aren’t going to be a lot of people from out of town and the chlorine is going to cut down on transmission in my opinion. I think we need to open it and I’m for it. And for people that are scared, just don’t go.”

Trotter said she agreed with those sentiments and added that lifeguards would have disinfectant to spray down lawn chairs and other surfaces.

Jason Shook spoke up and said, “Everybody talks about physical health but something that nobody talks about is mental health. I think part of that is having something for the people of Edgemont to do, especially the kids. There’s so many people dying every day from suicide because they’re isolated, and that’s the worst thing for them I think.”

Trotter said, “I will tell you I have a little guy who has been asking since February when the pool will open. It’s something they look forward to.”

Shook added, “People need to remember the first thing they told us when this happened was wash your hands and don’t touch your face. The other thing I would say is quit watching the mainstream media – the hype is just terrible.”

Mayor Carla Schepler asked, “Did you say something about wording in the contract?”

Trotter responded by pointing out owner obligations of pumping out standing water and pressure washing prior to manager’s obligations being carried out.

City Finance Officer Karen Cain suggested to the board that they discuss the language used in the new pool contract in executive session, to which they agreed.

When the meeting resumed after executive session, Schepler indicated that the city would like to approve the YMCA contract but wanted to discuss the amount and the dates before going forward.

Trotter responded by pointing out that the amount was approved last summer and said she didn’t understand why that would be in question.

Bob Worden argued, “If you’re going to be running a shorter amount of time for the same amount of money, that needs to be broke down and cut back.”

Trotter agreed to meet with Schepler to discuss the language changes in the new contract, but insisted that without funds from the city, the pool would not be able to operate.

The board agreed to inform Trotter of their decision by the end of the week and tabled the decision until they could look further into the matter.

In the last item of new business, the city is making a determination on whether to purchase parts to repair it’s existing road grader or acquire a different unit.

Board member Jason Shook said that he had discussed the matter with city maintenance staff and that the cost of fixing the grader might be too expensive relative to replacing it. “We should talk to the guy who rebuilt the last one and get that price first because they are very expensive. It’s also a machine we cannot afford to go without but that’s why our roads aren’t getting graded.”

The decision was made to table the matter until the city can determine the best way to proceed pending further consultation.

Earlier in the meeting during public comment, Kwinn Neff of Keystone called in to introduce himself as a candidate for the District 30 House seat currently held by Tim Goodwin. Neff began by talking about his earliest employment which included scooping ice cream and washing dishes. After high school he worked in the timber industry and as an excavator. He attended the South Dakota School of Mines where he earned a degree in interdisciplinary studies with a background in geology and GIS mapping. He currently works as a mineral consultant. Neff is serving in his 2nd term on the Keystone town board where his attention is devoted primarily to working on wastewater and sewer system upgrades. He stated that he is running on three main things – timber, tourism, and teachers. He also emphasized the importance of timber, minerals, and agriculture in District 30.

Also during public comment, Katie Darrow inquired about the status of the filtration system on the water head, describing the quality of water as being really poor for the last two months.

Board member Jason Shook responded, “They’re (the engineers) looking at a way to filter out as much iron as we can. Unfortunately, it is an ongoing battle. We are looking into it and we’re not trying to ignore it because it affects us all. The water is still good but nobody likes to drink orange or red water. We’re working on it with the engineers so hopefully we’ll have something put together as soon as possible.”

Council member Bob Worden commented, “I’m having the same problem. As soon as you turn the water on, it’s kind of gold.”