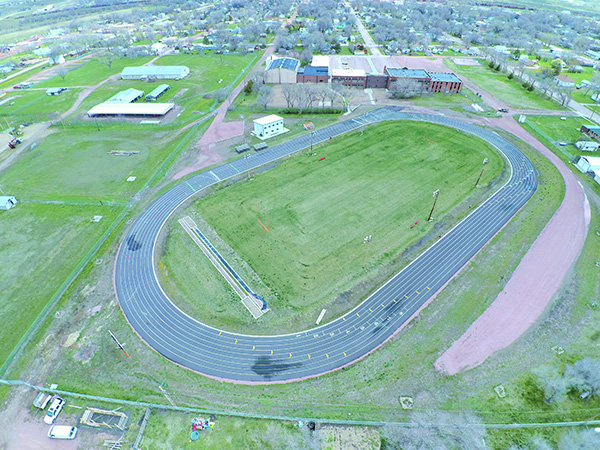 This area photo provided by Shane Miller shows the new 8-lane Edgemont School track with its recently painted lanes as well as the concession stand/press box. The school itself is locted just above the track in this photo, which faces to the east.

EDGEMONT – What started as an idea among three members of the Barker family only a four years ago, through the contributions of various community members, is nearing completion.

Brothers Kerry and Kelvin along with Kerry’s son Cody had put their heads together on how to reposition the Edgemont school football field, which would allow for a modern state-of-the-art track to be laid around it. The idea garnered support from the school district and the efforts to start the improvement began in early June of 2017.

Tragically, on June 21 of that same year, Cody was the victim of a commercial vehicle accident near Shawnee, Wyo., when a front tire blew causing his tractor-trailer to crash and ending his life.

“I threw myself into the project,” recalled Kerry Barker. His son’s enthusiasm for the athletic renovations they had envisioned was a primary motivation for the improvements. A year to the day from the accident, a ceremony was held and the new football field and track were dedicated in Cody’s honor as the Cody E. Barker Memorial Field.

Improvements to the project continue, with the lane striping of the track being the most recent addition, occurring only a couple of weeks ago.

Carl Shaw offered a tour of the nearly completed concession stand. It contains space for housing maintenance equipment, coaches booths, and space upstairs for the scorekeepers and announcers. Finishing walls, painting, and laying down the floor covering are the only remaining tasks to be completed. Shaw indicated a few other site improvements were to seed in the lawn surrounding the concession stand and add a storage building behind the scoreboard. Additional bleachers will be installed as well in the not-too-distant future.

At the top of the wish list is to be able to put an all-weather surface on the track.

Both Shaw and Barker noted the substantial price that such an addition would bring and no plans have been made in terms of where the funding would come from. If the previous efforts that have resulted in the improvements seen thus far are any indication, the Edgemont community will once again come together and find a way to get it done.