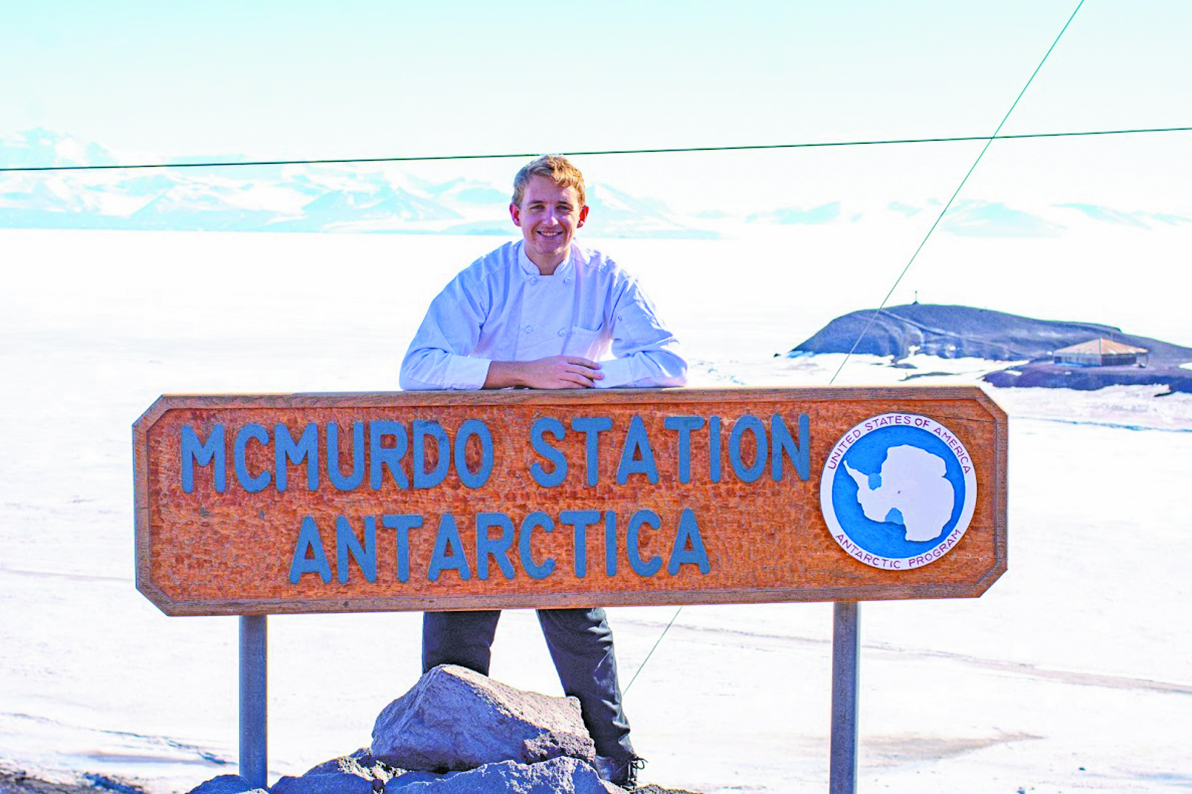 Hot Springs’ PJ Wetzel stands next to a sign at McMurdo Station Antarctica, located on the coast of the continent but about 850 miles from the South Pole. Wetzel, 24, worked at the station from October 2019 until February 2020.

HOT SPRINGS – There are probably many types of jobs in the world that can be considered “adventurous,” but for an American Culinary Federation certified chef, it’s hard to imagine a more adventurous job than the one Hot Springs’ P.J. Wetzel completed this past winter.

Wetzel, who normally works in his parents Phil and Vicky’s restaurant Woolly’s Western Grill, recently spent nearly five months preparing food at McMurdo Station – one of three year-round research stations located on the continent of Antartica, all of which are funded and managed by the National Science Foundation (NSF) for the United States Antarctic Program.

According to the Foundation’s website, Americans have been studying the Antarctic and its interactions with the rest of the planet since 1956. The current program comprises research by scientists selected from universities and other research institutions, along with operations and support by a contractor and other agencies of the U.S. Government. Approximately, 3,000 Americans are involved each year, which includes a wide range of contracted workers.

“Everyone from plumbers, carpenters, electricians to cooks, mechanics and power plant operators are hired to maintain the research facilities,” said Elaine Hood, who works in communications for the company Leidos. “Most work is a seasonal contract from October – February, which is the austral summer, although contracts will vary depending on the particular job.”

Leidos is the prime contractor with various companies subcontracted to Leidos, including the company for which Wetzel worked during his recent stint in Antarctica, which saw him leave his home state of South Dakota on his 24th birthday on Oct. 10, 2019, and not return again until Feb. 21, 2020.

The research that is being done in Antarctica has three goals, according to the NSF website: to understand the region and its ecosystems; to understand its effects on (and responses to) global processes such as climate; and to use the region as a platform to study the upper atmosphere and space. Antarctica’s remoteness and extreme climate make field science more expensive than in most places. Research is done in the Antarctic only when it cannot be performed at more convenient locations.

And while the scientific research is being done, ‘people gotta eat’ and that’s where Wetzel’s experience as a chef and his friendly, easy-going personality was determined to be a good fit.

Wetzel said he first learned about the opportunity to travel to Antarctica and work as a cook from a tour guide who passed through Hot Springs a couple of years ago. The guide had described how they had been working in Antarctica during the winter months and then working as a tour guide in the states during the summer. Considering his family’s restaurant is seasonal and that he is always up for an adventure, he decided to look into it further and ultimately apply.

He said there was a lot of paperwork and the process took about two months to complete, which included an hour-long phone interview. His certification from the American Culinary Federation in Colorado certainly helped his chances of getting hired, but perhaps equally as important was his personality. Wetzel said many of the questions he answered during the interview process were asked to help determine how well he would be able to live in close quarters with strangers, in sometimes extreme conditions, thousands of miles away from home.

His trip to Antarctica took about two days, beginning with a flight out of Rapid City, then to Denver, Los Angeles and then New Zealand, which is where much of his training and orientation took place before ultimately setting foot on the driest, coldest, windiest and emptiest place on Earth. When he left New Zealand, Wetzel said it was a beautiful 60-degree day. But when they landed in Antarctica, about five hours and more than 2,000 miles later, it was a blustery, minus-30 degrees.

McMurdo Station is located on Ross Island which is 850 miles north of the South Pole. He said it’s essentially a town built with portable buildings, but still featuring most all of the amenities and services that you would find elsewhere in the world.

There however is only one restaurant, which is where Wetzel worked as one of about 40 cooks, but it was open 24 hours a day and was always free to the inhabitants of the “town” and also all-you-can-eat.

“Food is comfort, and when you are far away from everyone you knew and so isolated, it’s nice to be able to eat something excellent or walk down at midnight and grab a slice of pizza,” Wetzel said.

The population of McMurdo Station was ever-changing with scientists and other contracted workers coming and going throughout his time there. Wetzel said the fewest amount of people who ate in their restaurant during any given day ranged from a low of 750 to a high of 1,350 in January, which was their busiest month of the year.

The continent received just one ocean freighter shipment of food per year, which supplied all three of the science stations, which also included one at the geographic South Pole (Amundsen-Scott South Pole Station), and on Anvers Island in the Antarctic Peninsula region (Palmer Station). The food is stored in four different very large warehouses and then prepared by Wetzel and the other members of the cook staff. It was all served buffet-style through a number of different themed-stations, from a traditional cafeteria selection of three protein options and a vegetarian dish, including steamed-froze vegetables, to a pizza station, to a Mongolian grill-style offering and others.

There was a five-week meal plan, which meant diners would see a different menu each time for five full weeks. Wetzel worked six days per week in a 10-hour shift per day, rotating to work in a different stations and times of day each time in order to provide a varied work environment.

Given the fact that there was only one shipment of food per year, fresh food was very rare, so it was either stored frozen or dry.

While most everyone always ate in the restaurant for all their meals, there was an opportunity for the inhabitants of the science station to bring food back to their residences to be consumed later.

“The calorie requirements of the folks working outside in the cold meant they had to eat a lot of food,” Wetzel said. “We were supplied with refrigerators and communal microwaves in the lounges if we wanted to take food for later, in fact there was a section in the cafeteria for grab and go foods. Think packaged snack foods and also leftovers from the buffet we would package for reheat, and lots and lots of cold pizza always a favorite.”

“Hot plates or anything similar was forbidden due to the extreme fire danger of anything like a candle or mug warmer even,” said Wetzel. “Being the driest and windiest continent on earth if a fire ever broke out it would spread very fast so fire danger was a real concern and many measures were taken to ensure there were no accidents.”

In addition to the restaurant, there was also one store at the station where inhabitants could get additional items of need. But if they didn’t have it, you were out of luck because they couldn’t get new stock until two years out they had to order and receive on the boat, he said.

“Some things they had at the store were some snack foods and aseptic milk which was highly valued as the powdered milk in the cafeteria had the taste of sawdust. Also there were lots of souvenirs and essential items like OTC medicines, toiletries, even underwear if you forgot to bring,” Wetzel laughed.

“Also at the store was the liquor and beer wine that you could buy,” he said. “With the alcohol however you were only allowed to buy a weekly ration worth, which was about four 6-packs of beer or one bottle of hard liquor and then wait until the next week if you wanted more.”

The pay for working as a cook in Antarctica is about average to the industry, Wetzel said.

“A starting cook could expect about $14 an hour,” he said. “The motivating factor for most folks I talked with and myself was certainly the adventure and experience, also there are no living costs at all while you are there. Housing, food, medical, travel is all a benefit of your job.”

“There was a contract completion bonus as well because they really encourage people to stick with it and finish,” Wetzel added. “t can be hard, and after a while, you miss home and want to go back and it is just so expensive for the NSF to send someone back home. There was lots of counseling options available as well. However, if you wanted to go they would get you back home.”

When not working, Wetzel said he looked forward to the opportunity to explore his surroundings.

The warmest days reached around 35 degrees, but usually, temps hovered around zero. He said however that inhabitants didn’t talk in terms of temperature, but rather ask each other, “What’s the wind like?”

Winds varied from calm to up to 60 mph. He said there a numerical system of communicating weather conditions, with “3” meaning good; “2” for precautionary, and “1” for stay inside. He said most every day he was there it was “3” with only a few 2’s. He said he thankfully never saw of “1.”

Every Wednesday and Sunday, the scientists would give lectures about what they were studied. Wetzel said they enjoyed sharing what they had been working with the other inhabitants of the station, and he thoroughly enjoyed learning about it – from the many biological studies with the oceanic wildlife to the NASA-related studies using very powerful telescopes.

“There is also recreation department on the base that organizes dances, a bar themed nights, outdoor trips like a camping trip, snowmobile trip, and guided tours,” he said. “The rec trips were my favorite part and it is just so nice to be able to get away from work for a change and enjoy the landscape and interesting things about where we were living.”

“Seeing the wildlife come in was incredible, you can’t help but get excited seeing penguins hanging out on the rocks below your bedroom,” Wetzel said. “Also, the views every day of the mountain ranges all around you, including Mount Erebus, the southernmost volcano that is very active and giving off smoke. The views of the changing sea ice on the Ross Sea and later in the season spotting whales that would follow in the wake of the icebreaker the Polar Star, which is the largest non-nuclear icebreaker in the world. It’s part of the Coast Guard fleet that comes down every year to clear the ice from the bay and make a path for the container ships to come into port.”

Wetzel said, “Definitely an amazing experience that I cant wait to do again.”

Which is something he is planning to do in the near future, as he now has his sights set on working in an even more desolated environment where there will only be about 10 people – at the Amundsen-Scott South Pole science station.