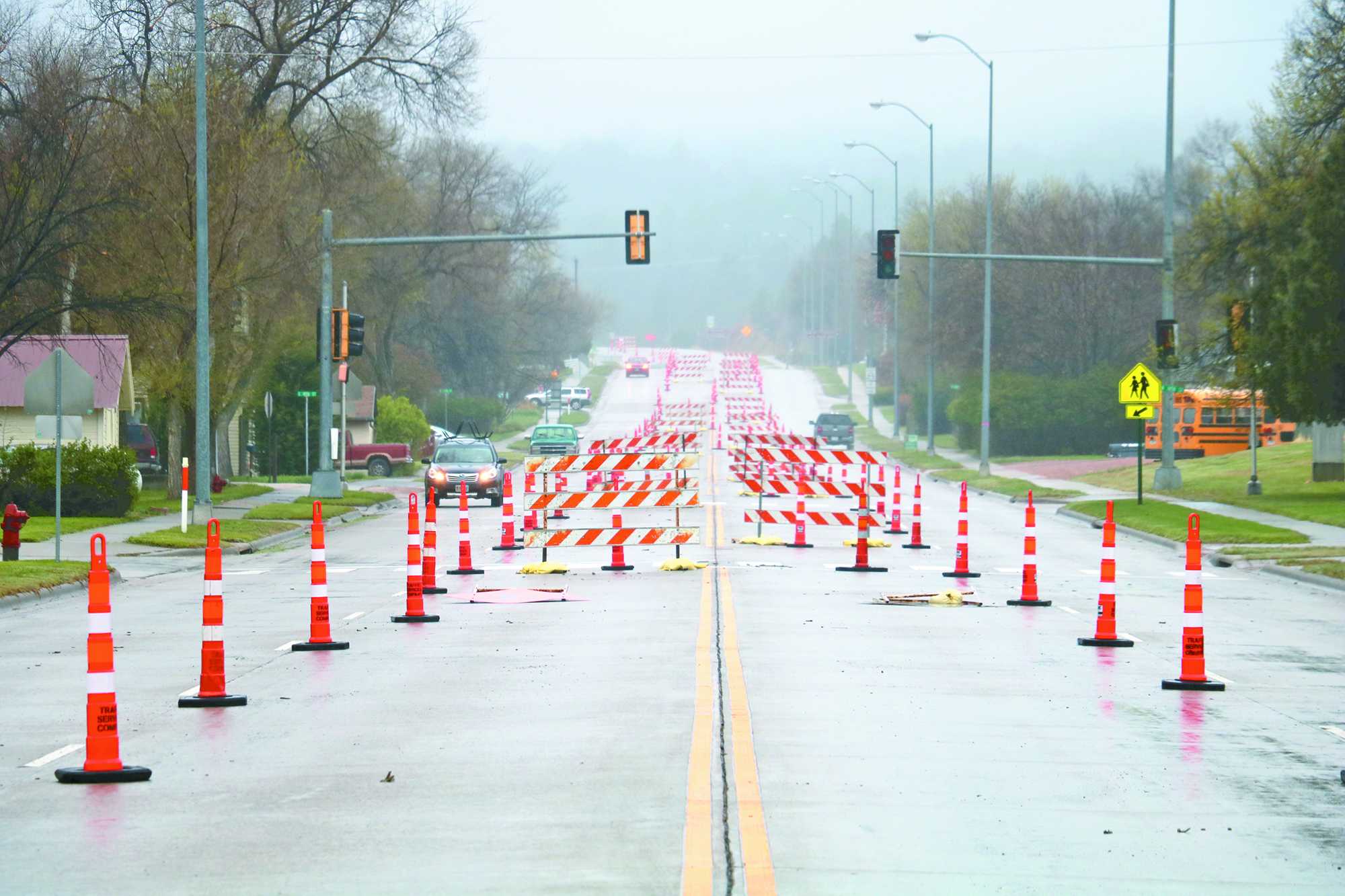 Cones and barricades on University Avenue near 19th Street signify where contracted workers will soon be performing a repair project that is expected to last until early June.

HOT SPRINGS – Over the next few weeks, the City of Hot Springs and its residents will be the beneficiary of a scheduled concrete surface repair project of the South Dakota Department of Transportation, whereas a contractor will be performing maintenance on a one mile stretch of Hwy. 18 from the intersection of University Avenue and Chicago Street west to the intersection of University Avenue and the Hwy. 18 truck bypass.

Hot Springs City Administrator John Gregory said the work currently being done by state contractors on the highway portion of University Avenue includes concrete panel replacement in the worst areas and also crack sealing along the entire length from the downtown stop light to the bypass.

Work is expected to be completed by Friday, June 5, depending on weather.

The DOT is asking motorists to be aware of lane closures with flaggers to guide traffic, a twelve-foot width restriction, suddenly slowing and merging traffic, changing work zone locations, reduced speeds through the work zone, and construction workers and equipment adjacent to the driving lane.

Coincidently, this exact portion of Hwy. 18 was also part of a recent Hot Springs City Council Joint Powers Agreement with the SD-DOT, in which the city agreed to eventually take over control. This agreement was approved by the council at its May 4 meeting in exchange for the state allocating $2.8 million of state highway funds for the specific purpose of constructing a 1,208 linear foot suspended sidewalk along North River Street, from the Jennings Avenue bridge to nearly Minnekahta Avenue.

The suspended sidewalk concept is something Hot Springs Mayor George Kotti has been promoting for more than two years, but it wasn’t until recently that the project came more into the forefront of the city’s plans as it prepared for the impending Hwy. 385 reconstruction project that is scheduled to commence next summer. The Mayor, along with other entities like the Hot Springs Area Chamber of Commerce and the Southern Hills Economic Development Corporation, supported the concept as a way to promote economic development of the town’s downtown historic district, and also address some specific safety concerns they had with the DOT’s original designs as well.

While support of the project was fairly widespread throughout the town, there has also been a number of detractors, which was evident by the 6-2 council vote on May 4 and also some comments by the public at its previous April 21 meeting.

The two members of the public at the April 21 meeting who were the most vocal about their concerns with the suspended sidewalk were local residents Steve Wynia and Tim Theusch. While both said they were not against the suspended sidewalk concept, both said they were concerned at the cost it could mean to tax payers down the road, should the city take over University Avenue and then be eventually stuck with a large construction project.

The concerns were alleviated some with the removal of the two “viaduct” bridges from the University Avenue transfer agreement. However, those same concerns were aggravated with comments made in a recent email to Theusch from SD-DOT Engineer Neil Schochenmaier, who stated that a 25-year life cycle cost analysis of University Avenue done in 2018 estimated the cost of repairs and maintenance to be between $1.5 million and $2.2 million.

In his email to Theusch, Schochenmaier stated that their analysis included, “scheduled maintenance items such as joint and spall repair and any necessary removal and replacement of the concrete pavement. The analysis also included annual maintenance of the corridor for things such as striping, mowing, snow removal, signing, drainage, etc.”

City Administrator Gregory addressed Schochenmaier’s and the DOT’s 2018 life-cycle cost analysis at the city council’s May 4 meeting and portrayed a much different life-cycle cost of only $187,481 for the next 25 years.

In his report presented to the city council, Gregory shared his extensive background of working on highway projects in the past and said he estimates only a total of $100,000 to be spent on crack sealing and concrete panel replacements over the next 25 years plus just $87,481 total for standard pavement maintenance, pavement markings and signings. He added that the city already budgets around $4,500 per year for seasonal and routine maintenance, to include snow removal and mowing.

Much of the discrepancy in the city’s and state’s life-cycle cost analysis can be attributed to the fact that the state’s estimate included the bridge costs and was based on University Avenue remaining a part of the state highway system.

When reached for comment about the state’s life-cycle cost analysis, Schochenmaier acknowledged that the costs in their analysis were based on the costs the DOT would anticipate investing in the corridor if it were to remain a State Highway, he said.

Furthermore, Schochenmaier said, “it is anticipated that if the highway became a city street, maintenance costs and future planned construction project timing would change. Those changes would be a function of the reduced traffic.”

Taking the bridge repairs and maintenance out of the equation would also lower the state’s life-cycle cost analysis, Schochenmaier said, but not to the extent that one might expect.

“Over the next 25 years, SDDOT estimates that around $230,000.00 will be invested into the bridges,” Schochenmaier said, which in turn would lower their projected 25-year cost estimate to just $1.27 million to $1.97 million.

In an emailed response to Schochenmaier and to the Fall River County Herald-Star, City Administrator Gregory stated, “I believe strongly that our 25 year LCC (life-cycle cost) values as presented to our City Council and the Public are accurate.

“We (COHS - City of Hot Springs) currently and since construction of Highway 18, have provided much of the maintenance and upkeep of this roadway (heavy-duty concrete pavement): including, but not limited to: snow removal and de-icing, storm drainage utilities and ROW maintenance all within our existing COHS annual budget allocations. We have had ‘boots on the ground,’ since the bridges and roadway were constructed (1982 & 1995) and believe we have developed realistic costs associated with this roadway maintenance, less the bridges and appurtenances, in an urban setting.”

Gregory also went on to say that the current repair work being done by the SD-DOT on University Avenue also greatly benefits the city with its anticipated future costs.

Despite some areas of disagreement in terms of projected costs for the future University Avenue, both sides have expressed the positive working relationship thus far, with hopes of that continuing in the future in regards to both the University Avenue transfer and the Hwy. 385 reconstruction and suspended sidewalk projects.

“The project coordination with the City of Hot Springs has been very good and will continue throughout construction,” Schochenmaier said. “We look forward to incorporating the City’s vision into the plan.”