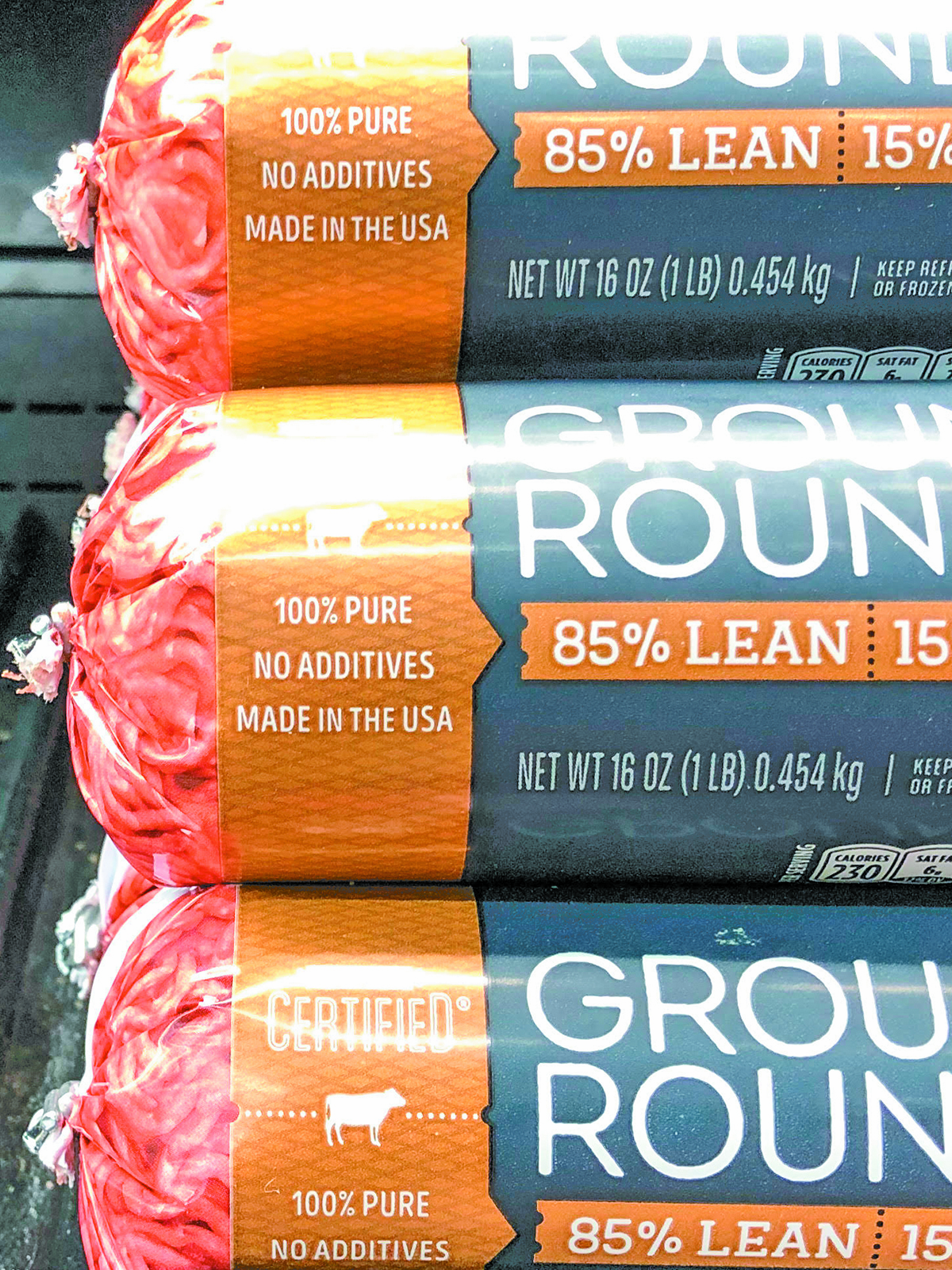 Some ground beef packaging claims “Made in USA,” which could only qualify the product as being processed in the U.S. but being a blend of meat from multiple foreign and domestic sources.

HOT SPRINGS – A petition to mandate fair labeling practices for beef, pork, and dairy products is circulating the Fall River County’s cattle growing community. Nationally, over 300,000 people have signed the petition to make Senate Resolution No. 391 (S. Res. 391,) into law, calling for the immediate reinstatement of Country-of-Origin Labeling (COOL).

Local ranchers see the reinstatement of COOL laws as a step in a direction that will force the beef industry to better accommodate U.S. raised cattle in a market that is increasingly feeding American consumers with foreign-sourced meats.

The debate surrounding Mandatory Country of Origin Labeling, or M-COOL, has been on-going in the cattle growing community since Congress repealed M-COOL laws on June 10, 2015.

Under current guidelines: for all fruit, vegetables, fish, chicken, goat, lamb, and nuts sold at retailers; consumers can reference the COOL information directly on the product itself; information showing where the product was grown, produced, caught, born, raised, or harvested. ”Florida Fresh Citrus” would satisfy these guidelines for COOL information for oranges, for example.

Since the repealing of Mandatory-COOL laws in 2015, beef, pork, and dairy products sold by retailers no longer fall under these labeling guidelines.

Packaged beef that is labeled “Product of the USA,” is most times processed in a plant on U.S. soil, but the country of origin for that beef could come from any number of countries including Canada, Mexico, or Brazil. The resulting product is often blended from multiple sources before being packaged and shipped to retailers.

When a consumer purchases a pound of their preferred ground beef from the market, they are quite often unaware that this product is a blend of beef, sourced from different parts of the world, and only processed and boxed, (“produced” not wholly raised) in the U.S.

These practices by major meatpackers appear to be cutting into both local cattle growers and consumers: devaluing the livelihoods of generational ranchers and preventing consumers from making well-informed decisions---deciphering where their meat is coming from and at what cost---when purchasing beef or dairy products.

Cody Pekron, the owner of Black Hills Meat Co. in Hot Springs, views the COOL issue from a position of both cattle grower and meat processor. Pekron’s family has raised cattle in the area for a generation. Cody himself purchased the Meat Co. in February of 2020 to provide local meat consumers with locally sourced beef.

He says that cutting out the packing industry altogether to take a more local, producer-owned packing solution is the only true way to fix the current issues.

“I almost think that the producers should get together and form their own [organization], with no meatpackers sitting on the board… come up with their own labeling that has Country-of-Origin on it and work to confirm that origin. That way, [local] producers could go to ‘producer-owned’ processors, cut out the government, advertise [their own beef], and get it out to the public,” he says.

Pekron makes some concessions when it comes to federally mandated COOL laws and their place at the table. “The big packers can buy meat from anywhere and label it as a product of the U.S. That really hurts the U.S. farmers because the meatpackers are getting [beef] cheaper from Brazil. They’re driving the prices down because they can get it cheaper [from foreign sources],” he says.

Pekron adds that he thinks a lot of the foreign beef would still be packaged and used by major restaurants domestically, a situation effectively negating any COOL laws that could apply to beef. But for consumers buying meat at the market, “where the consumer can actually see the label, it would make a huge difference,” he says.

In the writing of this story, a number of local ranchers were contacted to share their take on COOL and the state of their industry. Some were willing to provide information, some referred others for comment stating they felt they themselves were not qualified to comment on the issue. None were willing to go on the record at the time of writing this story.

With such a far distance between local action and federal mandate, and with the major beef markets catering to foreign producers, boxing out the “Big Four”  American meatpackers may be the only option for local cattle growers to ensure consumers know what they’re paying for at the market while securing fair pay for their legacy work.

On March 4, Agricultural Secretary Sonny Perdue made his position clear on COOL while providing his State of the Rural Economy testimony before the House Agriculture Committee.

“Mandatory COOL is not going to happen unless we want to do billion-dollar litigation damage with Mexico and Canada,” he said.

Secretary Purdue added that the USDA is “trying to thread the needle honestly, with transparency, so the consumer knows what they get and [we] help the producer feel they get value for cattle that have been grown and processed [in the U.S.].”

Purdue’s litigation remarks refer to the $1 billion in retaliatory meat tariffs threatened by Canada and Mexico through the World Trade Organization during COOL debates in 2015. These tariffs were considered a major reason for the repeal of M-COOL---which at that time, the American beef industry was afraid could crash their market.

Some local ranchers speculate that strong lobbying action on the part of the “Big Four” meatpackers had a more significant influence on the move to repeal COOL by the U.S. Congress than the threat of retaliatory tariffs.

One of these “Big Four” lobbying powers is U.S. meatpacker, JBS (Swift), an “American food processing company and a wholly-owned subsidiary of JBS S.A., a Brazilian company that is the world’s largest processor of fresh beef and pork, with more than US$50 billion in annual sales as of 2017,” according to public records.

The Washington Post reported in January of 2019, “‘JBS, one of the biggest meatpacking companies in the world, will sell 1.8 million pounds of pork products through a Trump bailout program that buys surplus commodities from farmers and ranchers,’ according to records published by the Agricultural Marketing Service, a branch of the Agriculture Department.”

“‘USDA only buys American commodities, produced on American farms by American farmers,’ a USDA spokesperson said in an email. ‘Approved vendors who choose to participate in USDA food purchasing programs, regardless of their business structure or domicile, provide direct benefits to U.S. farmers and ranchers.”

In a January 16, 2019 op-ed, Bill Bullard, CEO, R-CALF USA responded to this assertion by the USDA, “To be polite, this is absolutely untrue… all the beef and pork derived from imported live cattle and hogs from Canada and Mexico that are slaughtered in the United States is deemed to be a product of the United States.”

“This means the beef and pork from cattle and hogs that spent their entire lives in Canada and Mexico, then trucked into the United States for immediate slaughter is considered by the USDA as a product produced by the American farmer.”

“Unfortunately,” Bullard says, “the meatpacking lobby, particularly the North American Meat Institute (NAMI) and the National Cattlemen’s Beef Association (NCBA), which represent the interests of monolithic international meatpackers, has clearly courted favors from President Trump to keep consumers in the dark and the corporate subsidies flowing.”

Currently, cattle growers in Fall River County are reeling from lower than average prices for their cattle at auction. Some projections are stating that calf prices will reach as low as $1.00 a lbs by fall of this year, sparking fears of bankruptcies across the entire cattle growing industry.

This sort of collapse of the American cattle growing community will certainly affect meat prices and availability for consumers. The fallout from this collapse could claim not only another long standing domestic industry, but could signal the death of a celebrated way of American life, outsourced and marginalized like so many others in recent years.