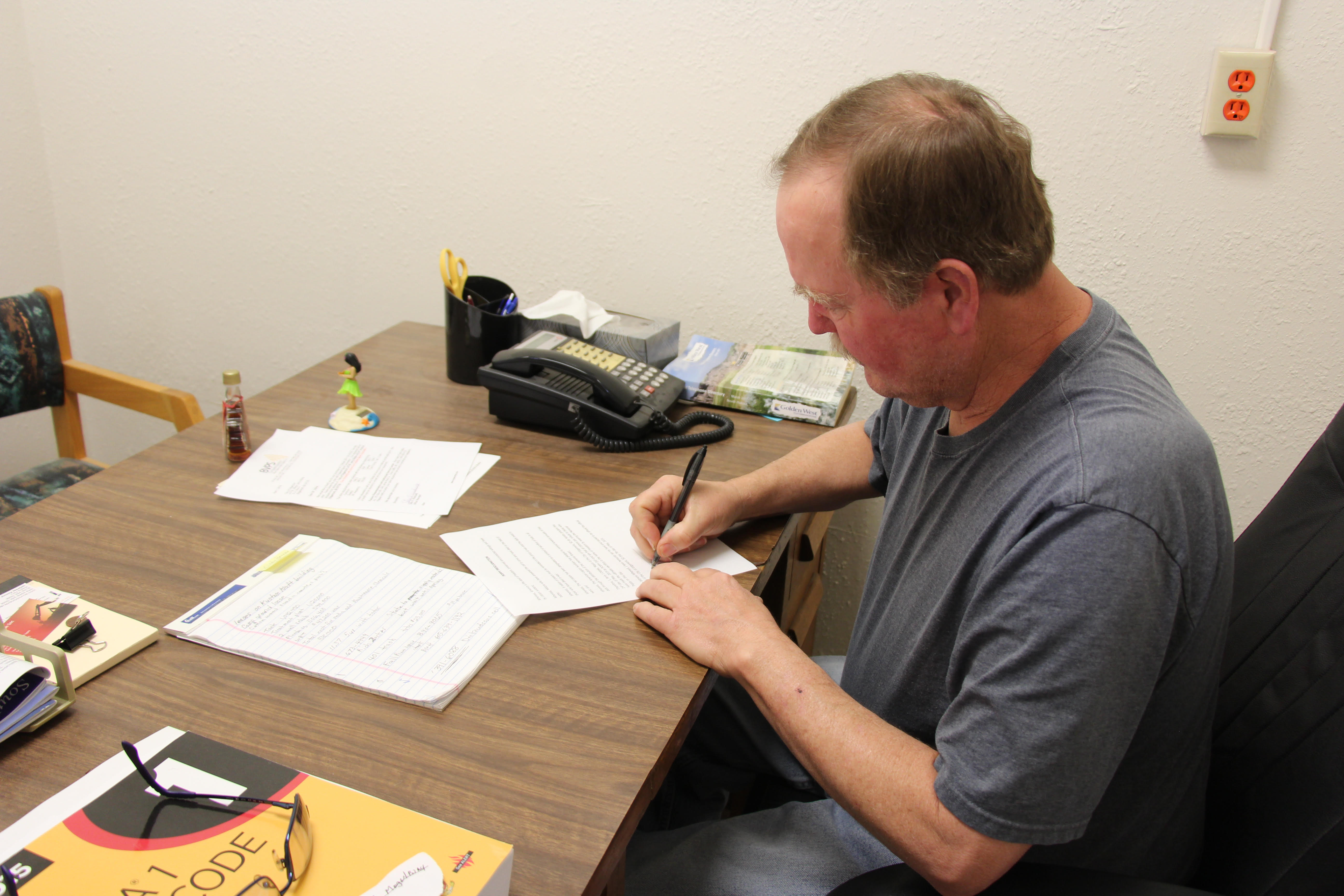 In this file photo from May 2019, Edgemont Mayor Jerry Dibble signs a proclamation declaring May 24, 2019 “Poppy Day” where he asked the citizens of Edgemont to pay tribute to those who have made sacrifices in the name of freedom by wearing the Memorial Poppy on this day.

EDGEMONT – When you’re a lifelong resident of the place where you were born and raised, you’ll meet and get to know a lot of people. That was certainly the case with the late Jerry Dibble. He was Fall River County through-and-through. A number of folks offered to share their thoughts and stories about Dibble, which collectively reveal just how much of a solid community member he was for the duration of his life here.

Prior to his sudden passing on April 20 during his second term as the Mayor of Edgemont, Dibble was employed by BNSF Railroad for 42 years, and that was where Bill Kreutzer reconnected with him after leaving the area for work after high school.

“I got reacquainted with Jerry when I moved back to my old hometown of Edgemont in 1977. I was continuing a railroad career that had coincidently mirrored Jerry’s career just one year behind him,” said Kreutzer. “I remember Jerry as being a very capable track foreman, he was a ‘go-to’ guy who planned his work and made time for other people during the day.”

Former Edgemont Volunteer Fire Department Chief Paul Nelsen recalls Dibble’s distinguished service with the department which he was a member of for 43 years.

“It was my privilege to serve 33 years with Jerry Dibble on the Edgemont Volunteer Fire Department. Jerry joined the department in 1978 and I joined in 1987. The fire department was Jerry’s passion,” recalls Nelsen. “He helped design and build many of our wildland trucks. His knowledge and skills were unsurpassed compared to any of our other firefighters. While Fire Chief Jerry was instrumental in moving our fire hall to the old Kustom Craft building west of town. This facility was much larger and allowed the department to expand to more and larger vehicles. It gave us more room to train and store our gear. Jerry worked long and hard one getting this building ready for the department. Training was always important to him. I attended many trainings with him. He strived to keep up with the latest techniques and tactics of firefighting, whether wildland or structure fires. He created the cadet program for younger people who were interested in joining the department.”

Nelsen remembered an instance where Dibble’s lighthearted approach kept them from getting overwhelmed in a difficult situation.

“He had a sense of humor which took the edge off some tense situations,” Nelsen said. “I remember we were fighting a grass fire west of town at night. It was very dark and Jerry drove our big 6x6 military truck into a soft wet drainage. He tried to keep going but it just got deeper and deeper. We were buried so deep I could step off the back of the truck without using the ladder. The bumper was only inches off the ground.

“The fire continued to race away from us. Jerry open the door of the cab looked at the sunken tires, looked at me smiled and said, ‘It might be a little wet in this draw.’ He did not get mad or yell he just laughed. That’s all any of us could do. We had to call in the country road grater to pull us out. Many times after that when a truck had a minor mishap or got stuck I thought of Jerry that night,” Nelsen recounted.

District 30 State Senator Lance Russell, who is the city attorney for Edgemont, worked with Dibble during the time he served as Edgemont’s mayor.

“Jerry was a kind-hearted, community-minded person,” Russell said. “I think Jerry had many of the great qualities his father, Ernie Dibble, possessed.  They were both good listeners, hard workers and friends to many. Jerry was enjoyable to be around and will be greatly missed by the many people whose lives he touched.”

Brent White, owner of The Gun Vault, recalls the time when Dibble approached him with the notion of running for mayor.

“When Jerry first approached me about running for mayor, I asked him what his agenda was. He looked me squarely in the eye and said, ‘I don’t have an agenda.’ He just wanted to work for the betterment of Edgemont and its people,” said White. “That is a conversation I will always remember – no personal agendas or vendettas, only to help the people and the town.”

“Though I had met Jerry Dibble before, I got to know him better when I interviewed him for a local publication before the last Mayoral election,” recalls Gregg. “Jerry was very personable and easy to talk to. His quiet leadership and eagerness to help were outstanding qualities of the man. He had an easy way with people and will be sorely missed in the various circles in which he traveled.”

Just as with any political office, serving as mayor is going to mean that there will be relationships that are tense or become strained when residents approach you with a matter they want resolved. This was the case with Mary Kellogg, who was having a casual conversation with Dibble on the street outside her home on the Sunday afternoon just hours before he passed away.

Months earlier, the two had differing perspectives on a matter that caused conflict between the two, but later ended up being resolved without causing permanent harm to their relationship.

Kellogg readily admits that her part in the conflict did not represent her finest moment and credits Dibble for keeping his cool as he dealt with her through what had been an ongoing frustration.

“On the afternoon before he passed away, we were reflecting on that situation and laughing about it,” recalls Kellogg, a credit to Dibble’s ability to put aside differences and get along with others.

Cad Waite, co-owner of Hat Creek Grill, felt as though Dibble would serve the community well in the capacity of mayor.

“When Jerry was running for Mayor I actively promoted him the best I could. I knew him to be fair and honest,” Waite said. “He cared deeply for the community.”

Waite had spoken to Dibble about the desire to start brewing beer at Hat Creek.

“The last conversations we had was about our desire to build the Edgemont Brewing Company,” said Waite. “We spoke at length about his favorite brewery in Wyoming and about some of the challenges that lay ahead for this endeavor. We were all looking forward to the future. My heart goes out to such a wonderful family who has lost their father, a husband, and a center.”

Waite intends to dedicate the first draft in memory of Jerry Dibble and the service that he provided to Edgemont. “The first pint will be raised in toast to a great man that won’t be forgotten,” he said.