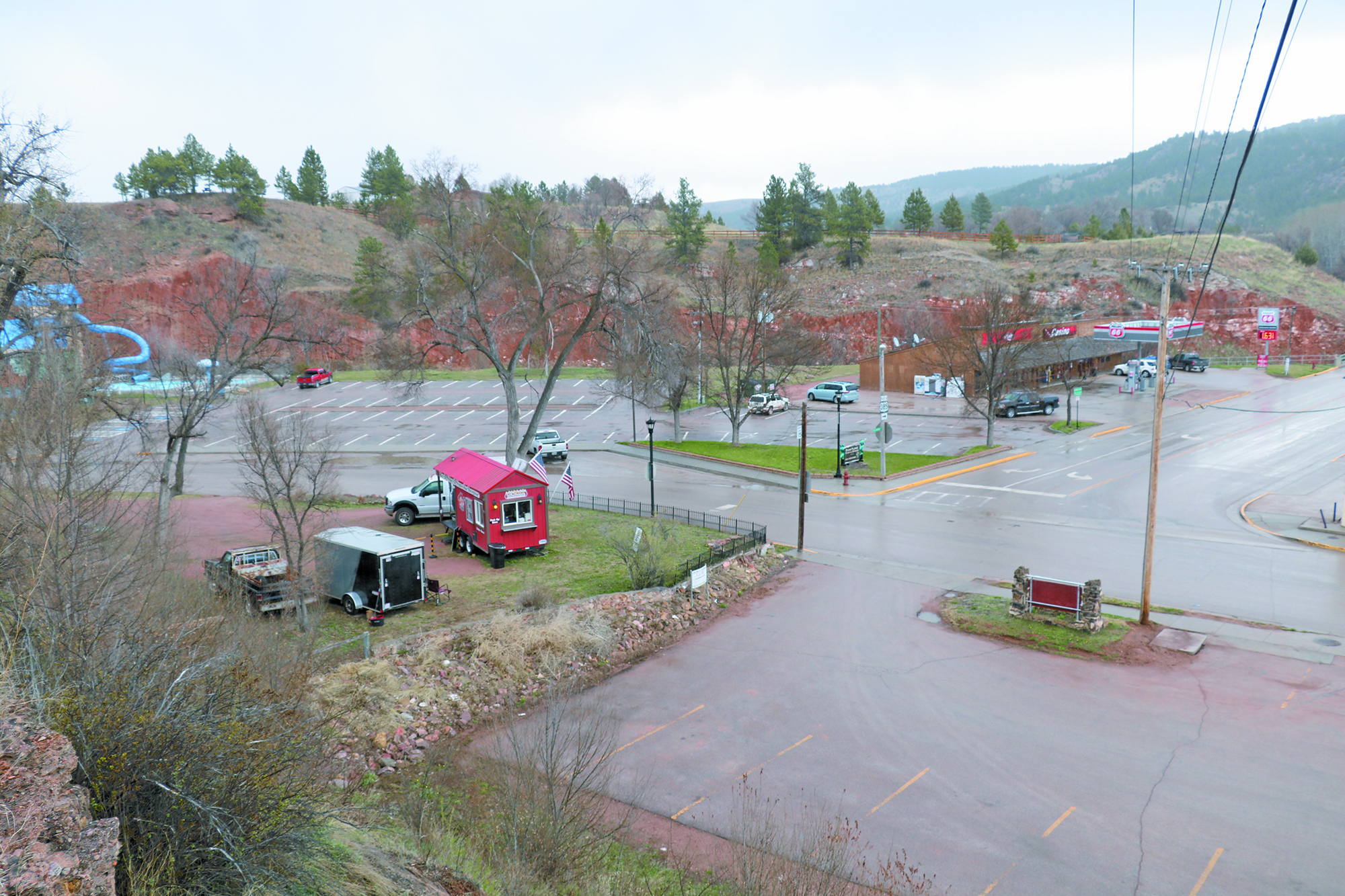 The space shown above in the lower left is currently being occupied by one mobile food vendor business in Hot Springs, but could soon be the site of more mobile vendors if plans progress by some members of the Hot Springs City Council.

HOT SPRINGS – If things continue in the direction they’re headed, Hot Springs may soon have a seasonal space dedicated specifically to mobile vendors. But for now at least, one business is utilizing the space and it’s been paying off pretty well.

Don Zon and Julie Moe, who live on Argyle Road but operate the mobile food vending trailer Red Shed Smokehouse, reported last week that business has been booming at the intersection of Battle Mountain Avenue and North River Street, ever since they opened back up for the season on April 1.

Last summer, in addition to also setting up occasionally at special events in Centennial Park, the two operated their business primarily in the parking lot of what is now Wendell’s Garage, across from the Depot Visitor’s Center. When looking for a place to open up for the 2020 season, Zon said he was talking to Barb Walter, who often attends Evans Plunge board meetings, and the two of them discussed the idea of setting up in the nearby open space located kitty-corner from Dale’s Family Restaurant.

The city-owned space had been serving as overflow parking and a picnic area for the Evans Plunge customers, but for the most part, it was underutilized, especially considering its potential at the intersection of U.S. Highway 385.

Hot Springs Councilman Dave Burris, who chairs the city’s Parks & Recreation Committee, said the space is not currently part of the city’s park system but it did have water, sewer and electrical already available. Burris said when Zon approached the city about using it for his mobile food service business, they agreed to allow him to give it go, provided he invest his own money in connecting to the utilities.

Zon said last week that he was not using the city water because he brings his own water, but he did make the necessary arrangements with Black Hills Energy to bring electricity to his business setup.

Both Burris and City Administrator John Gregory confirmed that they’ve since received additional interest from other businesses who were interested in possibly setting up in the space as well, including both in-town vendors and those from out-of-town. With the city recently establishing a formal ordinance that governs mobile food vendors, it now makes it much more feasible for a site to be dedicated for such a function, Burris said.

Development of the space as a dedicated vendor area is still in its preliminary stages, but it was mentioned during the April 20 council meeting and will likely be brought forth more formally as an agenda item in the near future, Burris said, which would also establish rental fees and terms.

Burris said that there is enough space to allow for at least three vendors, but possibly as many as four. He also emphasized that it also wouldn’t be solely for food vendors, but other kinds of vendors as well. If this endeavor proves successful, Burris said the city may look into identifying other areas of town that can be developed similarly for seasonal vendors.

Burris said that the Red Shed Smokehouse has not paid any rent to the city yet, but their investment in developing the electrical would most likely be credited back to them as the site gets further developed by the city for more vendors.

When asked what he thought about more vendors joining him on the city property across from Evans Plunge, Zon responded by saying, “the more the merrier!”

Zon said mobile food service businesses are very specialized in what they do. His business is well-known for is fresh, homemade high-quality smoked meats like brisket, ribs, pulled pork and chicken. With other mobile food businesses located nearby but specializing in other delectables, the multiple options provide a convenience to consumers that can help bring more out-of-town people and locals downtown to the area and serve as a food destination for the town.

Comparing the success of his business in the short time he’s been open so far this year, in relation to last year, Zon said this year has been far-and-away better. They’ve been routinely selling out of the inventory of meat every day, he said, adding that they are currently open Wednesday through Sunday from 11 a.m. to 7 p.m.

A large part of that can be attributed to the growing reputation he is getting about the quality of his food, but much of that can also be due to his change of location as well as the current public health crisis.

Being located on an elevated corner of a highway intersection is certainly a plus, but the fact that there has not been any inside, sit-down restaurants open currently due to the COVID-19 restrictions has also favored businesses like Red Shed Smokehouse as well.

While most of the country’s restaurants are trying to adapt to only offering curbside take-out, it’s business as usual for mobile food vendor businesses.

Zon said mobile food vendors offer some of the cleanest and safest environments for consumers to purchase fresh-cooked meals, which is something he hopes more and more people will realize even after the coronavirus concerns subside. He looks forward to tourism season getting underway and Evans Plunge reopening, as he feels his new location and the Plunge will mutually benefit from each other.