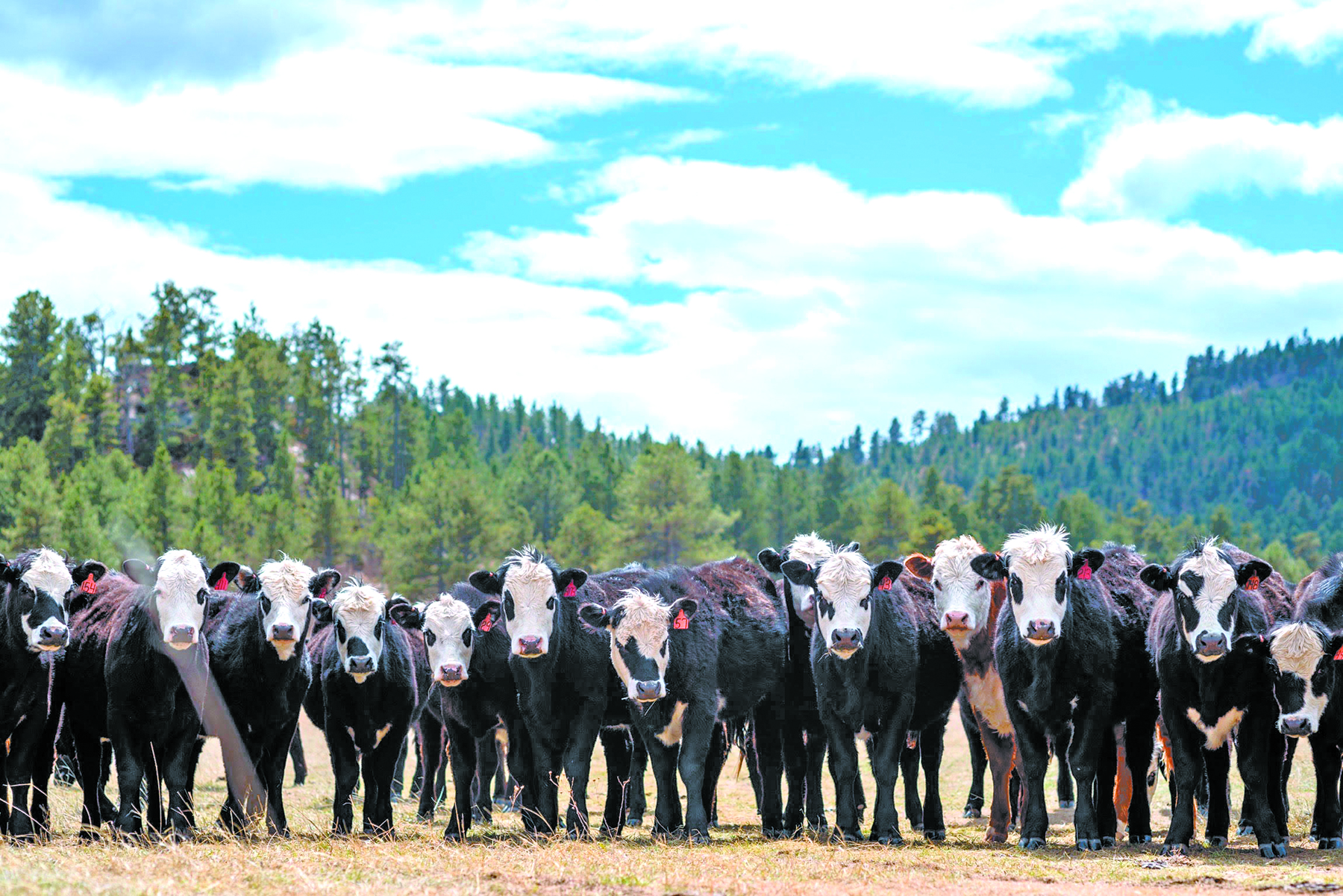 A herd of Black Baldy – a crossbred beef cattle produced by crossing Hereford with Black Angus – stand in a Minnekahta Valley field just west of Hot Springs this past Monday. As beef markets continue to crash, many county ranchers are deciding to hold on to herds and hold out for better auction prices.

FALL RIVER COUNTY – Consumer demand for meat has increased since the beginning of the COVID-19 pandemic due to a shift in food consumption across the country. With the increase in demand, meat prices have increased as well.

While grocery stores overcome challenges to keep meat coolers stocked, and consumers continue to stock up and eat at home, a growing gap has emerged between the gains seen by major meatpackers and the decreasing revenue cattle producers are receiving at auction.

Ground beef, which makes up more than 40 percent of overall beef sales in the U.S., gained big the week of March 15, at +99.7 percent — adding $179 million in new dollars, according to information released by IRI, a consumer data analytics company.

These numbers translate into big business for the four major meat packaging outfits, who control 80 percent of the US market. Tyson, National Beef, JBS, and Cargill all increased the price of boxed beef sold to grocers by around 20 percent in March while at the same time, cutting the purchase price to cattle producers at auction.

According to reports from local auctions, cattle growers have been receiving on average hundreds of dollars less per head than normal. Such a price decrease is forcing markets to cancel sale dates and ranchers to rethink their seasonal strategies in attempts to stave off extreme losses.

Fall River County Commissioner, Joe Falkenburg, has been growing cattle in the county for 35 years. He says he’s been surprised at the rate cattle prices have decreased at auction in recent weeks.

“We had a number of culled cows we were going to take to market, but the bottom just fell out of it so bad that---a cow that would be weighing a thousand pounds, you might [recently] get $800 for it if you’re lucky,” explains Falkenberg.

Falkenberg and other ranchers in the region have decided to wait things out, opting to hold onto cows, growing them longer throughout spring, with hopes to bring them to market when prices improve.

Alan Bishop, located east of Hermosa, has been ranching there since 1970.

Bishop agrees on the growing disparities in the cattle market. He’s also decided to hold onto his culled cow herd and to wait things out.

In the meantime, Bishop has been working with local butchers to sell cows direct to consumers.

“What I’ve done to try to help, if I can sell two or three head every other month---selling them out as quarters/halves/wholes to customers,” Bishop says.

Black Hills Meat Co. in Hot Springs has been working with Bishop and other ranchers to help process cows and sell local beef to customers.

Cody Pekron is the Owner of Black Hills Meat Co.

“On the retail end, [cost increase] is not good. Prices are almost double than before. There’s a huge increase in our cost, so we take a hit on markups,” says Pekron.

When working with boxed meat providers, “Costs have gone up while [we’re] trying to protect the consumer---keeping it as affordable as we can.”

“Locals [consumers] hooking up with local ranchers is the best option to keep costs in place for everyone. Everyone wins,” he adds.

But when freezer space is limited for most families, shopping at major grocery stores is still preferred by many.

To meet that challenge, Pekron suggests that families should buy in groups, splitting the quantities of quality, supporting local beef while saving themselves both money and freezer space.

When asked about the idea of locally delivered beef, Commissioner Falkenburg agrees it’s a great idea, but perhaps not yet feasible for some ranching outfits.

“Ya know, that is a wonderful idea because they [consumers] get really wholesome food and eliminate the middleman that way,” says Falkenburg.

He says that consumer demand challenges come up in this situation, especially when educating consumers on the difference between grass-fed compared to grain-fed beef.

The time it takes ranchers to travel to local butchers is another challenge, as well as the frequency in selling to local markets instead of at major auctions.

“I think it’s a tremendous idea and I think there should be more and more of that as time passes,” Falkenburg adds.

“I think the problem is that people [ranchers] are running such a large volume of livestock, that you can sell some of them that way, but you still have to have a market for the majority of your herd.”

As the major meat market continues to struggle to support cattle growers, South Dakota state legislators have taken notice of the on-going issue.

“It is absolutely critical that our producers be able to receive a fair wage, a fair payment for the product that they produce. And they cannot be subject to market manipulation,” Rounds said in a letter to the Attorney General’s office on March 19.

“If they are, we will lose our domestic food supply and we will be totally dependent on foreign food sources. That is not good for the consumers in this country and most certainly it is a bad and very sad day for our American producers who are as efficient and as good at producing not only high-quality food but large quantities of food as well.”

On April 8, U.S. Secretary of Agriculture, Sonny Perdue, made this statement via Twitter, “USDA’s Packers and Stockyards Division will be extending our oversight to determine the causes of divergence between box and live beef prices, beginning with the Holcomb Fire in KS last summer and now with COVID-19.”

On April 9, U.S. Senator John Thune penned a letter to Attorney General William Barr, urging him to investigate possible price manipulation, “The widening gap between cattle producer and packer profit margins raises serious concerns about potential instances of price manipulation and other unfair practices within the beef industry, especially considering that four meatpacking companies control more than 80 percent of the beef supply in the United States.”

“I think that it’s a really difficult time for everyone,” adds Commissioner Falkenburg. “Agriculture is suffering quite a bit so we’re hoping, down the line when this opens up, there will be a better market.”