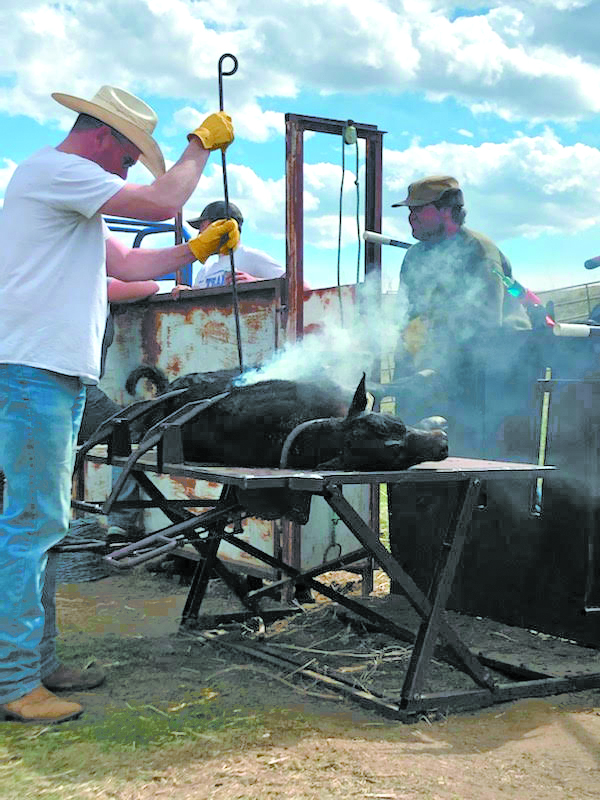 Rather than hold their traditional branding with dozens of friends and neighbors, Mark Walton of Oral drastically altered his branding operations this past weekend, as shown in the photo above. Many others in the county had indicated they plan to do the same, and in some cases, even postpone the timeframe.

EDGEMONT – Fall River County can be described as somewhat isolated. It is devoid of certain elements of society that are characteristic of larger towns. No strip malls or large shopping centers. No sprinkling of large retailers like you find in Rapid City. In fact someone traveling from Rapid City to Denver might pass through and make note of the lack of amenities some folks have decided they just cannot do without.

Many local residents would lay claim to the notion that the county’s remoteness or isolation is something they appreciate. It’s peaceful and quiet with opportunities to go hiking or biking and not encounter another person. For the most part, the cares and worries of the bigger cities and crowded metropolitan areas of the country never trouble folks living in the small communities that make up Fall River County.

The current experience is an exception to that general rule.

Coronavirus or COVID-19 has turned life upside down for people living in towns of all sizes all over the globe. Most outbreaks have occurred in large cities and have been more frequent in states that have more municipalities in closer proximity to each other. South Dakota’s largest outbreak has received plenty of attention as it involved more than 300 workers at the Smithfield Foods plant in Sioux Falls.

Despite the fact that Sioux Falls is roughly 400 miles to the east, and Rapid City, while much closer, has only so far had a handful of known infections, coronavirus weighs heavily on the mind of some in the ranching community throughout Fall River County.

Brad Grill, who has cattle on Argyle Road, is one who recently expressed concern that a branding operation could reasonably be viewed as an open invitation for coronavirus, which is transmitted easily from person to person when people are in close proximity to one another.

“If we get any inquiries from folks who might ordinarily express interest in coming from a ways away, we’ll let them know that for everyone’s safety, this isn’t the year to make it a social event,” said Grill, who noted that just about everyone taking part in a branding is motivated to gather with others in celebration of greening spring grass and warmer weather. This year’s attitude has to be different he insists.

“Under ordinary circumstances, we’d welcome all those folks coming from other states,” Grill says. “This year, its here’s the 10 guys I need to get the job done and that’s it.”

“This year, it’s a matter of just being a little more aware of who you’re dealing with,” he says. Unlike other ranchers who have larger operations, Cape has the benefit of having to involve fewer people to get the job done.

“Our branding consists of family members with usually a total of about six people,” Cape explained. “You don’t want people from a large metropolitan area coming in and exposing people living in isolated rural areas,” he says. “They could have an infection and maybe gotten over it and come in as carriers.”

An added incentive Cape identified, in addition to rural folks not wanting someone bringing in an illness, is the fact that, regardless whether a rancher is sick or healthy, they won’t get a break when it comes to the work that has to be done. “Most are focused on their operation and avoiding infection, because you don’t have anyone to come in and run your operation for you,” says Cape.

Rancher Tim LaMont shared an account provided by a friend who lives in North Dakota, which he says is conducting testing in all of its counties. His friend told him that people in a couple of counties were asymptomatic, but tested positive for the virus. The long latency period, or time until which people display symptoms, is cause for concern according to LaMont. You might halfway be able to control who shows up at your branding, but if you show up to help a neighbor down the road, there is some uncertainty. LaMont said that he was “very much concerned about contracting the virus at a neighbor’s branding.”

LaMont shared some strategic ideas that he hopes will promote the health and welfare of those participating in his branding. He plans on dividing his 500 calves into about four groups with five to eight folks involved with each group. He plans to have wrestlers stay with the same person throughout the day. Normally, he says, there would be about 60 folks involved strictly with the branding effort. Some folks of course show up to help with food preparation and there are always elderly observers just on hand to take in the scene.

His last move to lower the risk of infection is to push out the date for his branding a little later than usual. “We normally brand the last week in April, but this year we’ll try for the middle of May,” he says.

Les Cope, who ranches south of Oelrichs, says that coronavirus has changed everyone, but some more than others.

“You’ve heard of making a mountain out of a molehill?” he asks. “Well this isn’t a molehill, but it isn’t a mountain either. It’s a hill and calls for some precautions.” Cope lamented about the fact that this year, some close family members won’t be part of the branding scene that takes place this spring. “I’ve got kids and grandkids in Rapid City and Scottsbluff that I’ve politely asked not to come.”

The tone in Cope’s voice as he shared this made it obvious that his request to loved ones always present at branding time was difficult to make.