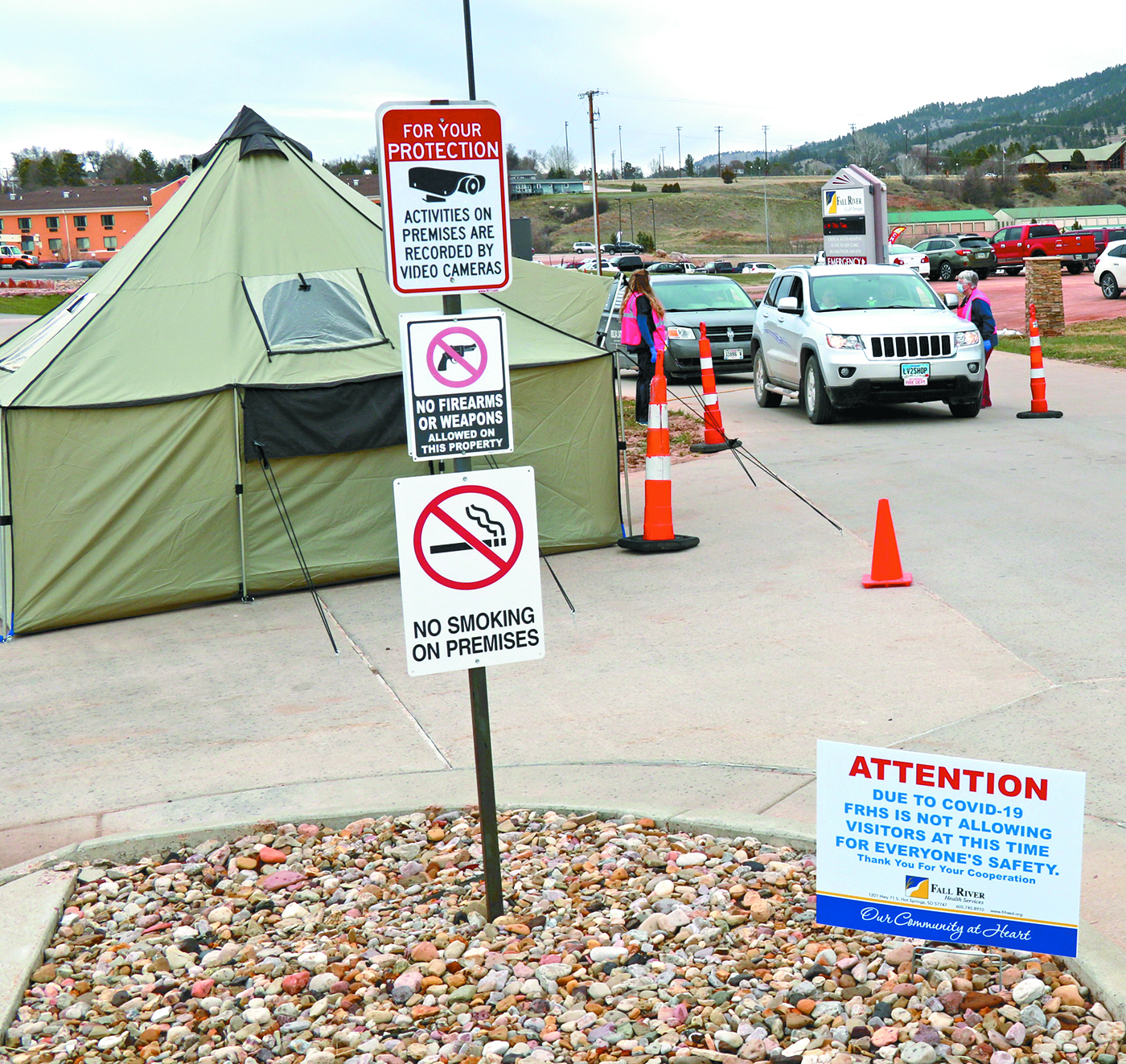 A pair of vehicles pull into the entrance of Fall River Health Services last week and are greeted by hospital personnel. Everyone entering the facility are now stopped and asked a series of questions designed to establish someone’s risk of COVID-19, to ensure they are treated safely and also to help keep the virus out of the building.

Despite being a smaller facility, FRHS doing everything needed to be prepared

HOT SPRINGS – Sitting inside one of three large Cabela’s outfitter tents that have been set up outside of Fall River Health Services (FRHS) for the past couple of weeks, Lori Allen confidently described how the facility has been preparing for a potential influx of positive COVID-19 patients.

“It does weigh on us what potentially is coming,” she said. “To make sure that we are making the right decisions and the best decisions to keep our community and our employees safe.”

Even before the first swabbed sample was taken on March 4 for COVID-19 testing at Fall River Health Services, the staff of Hot Springs’ Critical Access Hospital believes they have been ahead of the curve to flatten the curve.

Gregg Zike, P.A., said for as small of a facility that Fall River Health Services is, they are doing all of the same things that much larger facilities are doing, which is something for which the community and the staff should be very proud.

“We have moved the possibility of COVID getting into the hospital to a very minimal status. Not many hospitals of this size are going to have three tents, or a plan like we have,” Zikes said. “I think our plan mimics what the bigger hospitals have. We just don’t have the same room capacity or the staff numbers. But even though we don’t have the numbers to run this 24/7, we will when we have to.”

Allen said the FRHS began taking proactive measures more than three weeks ago with a No. 1 priority to keep COVID-19 out of the facility, which entailed a lot of meetings to develop a plan and implementing a process to screen employees by monitoring travel and symptoms. This included supportive measures like staying home on quarantine and then coming back masked.

From the outset of the COVID-19 concern more than three weeks ago, visitors have been restricted from seeing patients and nursing home residents, and that ban remains in effect today.

Other more recent precautionary measures that have taken place include the construction of a pair of large outfitter tents – one to be used to examine high risk patients and another for employees to use for decontamination when changing in and out of their clothing. Trailers have also been placed in the parking lot to store and clean supplies.

Again, to keep “healthy people at home,” FRHS has also recently implemented tele-health for patients with routine behavioral health – psychiatry and psychology – appointments. Tele-health appointments will also likely be expanded to included family practice appointments as well, but hasn’t been implemented yet.

Fall River Health has also recently suspended all elective outpatient surgeries, which in-turn has freed up space and staff to create a “COVID Ward” in the hospital, should an emergency situation require additional beds and more ‘hands on deck.’

If someone tests positively for COVID-19 through Fall River Health Services, the next steps would depend on the patient’s medical status, Allen said.

“If it was something that we could manage in-house, then yes, we would care of them here,” Allen said. “But if they progressed, we normally don’t care for patients at an ICU level in a community hospital. We would then try to transfer them to a higher level of care.”

Allen said there are two ventilators on-site in Hot Springs. She said they also have tele-health medicine and Avera e-Emergency and Avera e-Hospitalist as services they access for assistance.

Zike said it’s important to remember that the first method of treatment for someone who tests positive for COVID-19 is to quarantine at home, and that they would not be hospitalized unless they began to suffer from significant respiratory issues.

According the state’s coronavirus data, as of Monday, April 6, only 23 of the 288 positive COVID-19 cases in the state required hospitalization, which is 8 percent.

If their symptoms worsen, a local patient would then be encouraged to come to Hot Springs’ ER where they will be evaluated and then possibly treated and sent home, or admitted into Fall River Hospital or transferred elsewhere. Zike said someone with a history of pulmonary issues would have an increased chance of being transferred, opposed to someone previously relatively healthy and without that history, but having respiratory distress.

“You don’t have to have I.V. fluids, you just have to get plenty of fluids,” Zike said. “It is good if you take some kind of electrolyte, but at the same time, water works.”

Zike said if a patient with COVID-19 were admitted into Fall River Hospital, its possible they would be put on a ventilator and then given typical medicine associated with being on a ventilator, but there are limited other medicines available to specifically treat COVID-19 at this time.