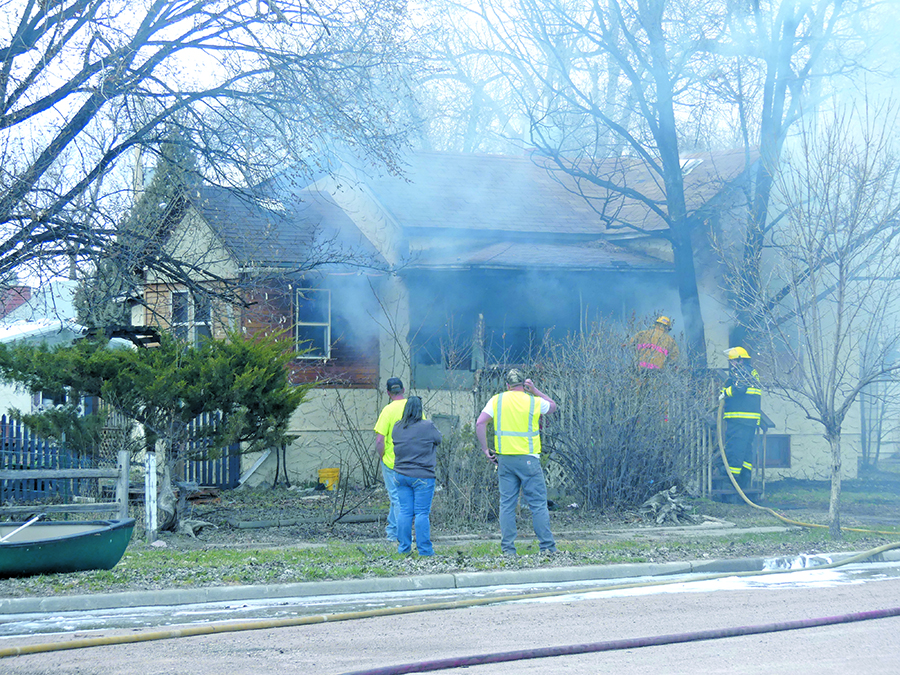 Bystanders look on as the Edgemont Volunteer Fire Department work on a house fire last Tuesday, March 31, at 206 3rd Avenue.

EDGEMONT – A rental residence located at 206 3rd Avenue and owned by Dallas Stewart of Edgemont was destroyed by fire last Tuesday afternoon, March 31. The call came into the Edgemont Volunteer Fire Department at 2:12 p.m. According to Edgemont Fire Chief Nate Trotter the fire appeared to have started in the northeast corner of the residence.

The cause of the fire has not been determined and according to Stewart, he received word from the State Fire Marshall’s office that there would be no investigation since there was no injury, loss of life, or suspicion of arson.

The house was occupied by Trent McCarthy, 24, and his fiancée Destiny VanderMolen, who is 21. The couple has a 6-month old baby named Jaxton. The family was away on a medical appointment in Rapid City when the fire broke out. Due to Jaxton being born prematurely at 26 weeks, his condition has required frequent medical visits to monitor his lungs, weight, and other parameters. They are now living in an apartment on 4th Avenue, which was acquired with some assistance from the Red Cross.

To help the family with their loss and expenses, a Go Fund Me page has been established at  www.gofundme.com/f/5pkb8t-help-for-trent?. For those preferring to donate or contribute locally, they may call 890-0427.