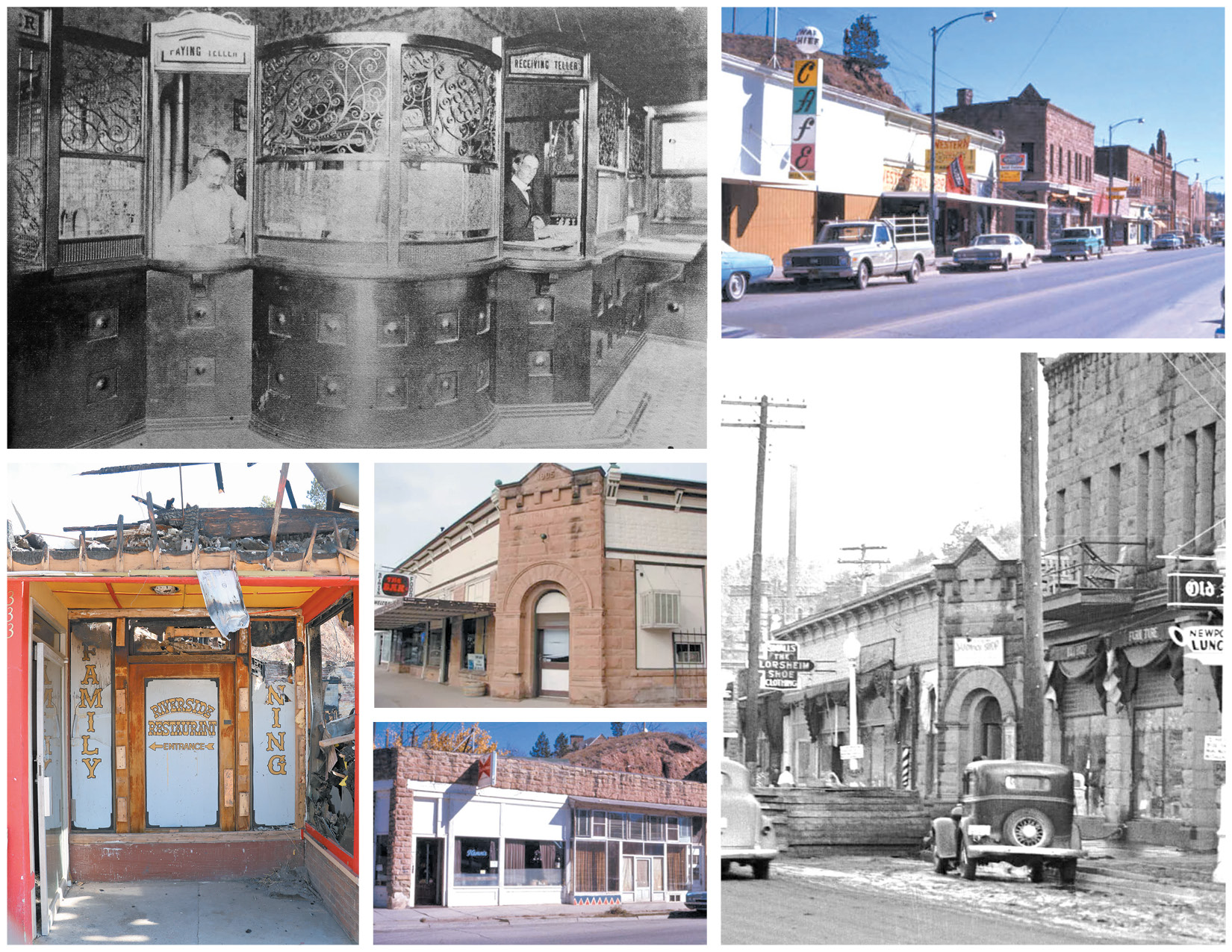 HOT SPRINGS – On Monday night, Feb. 17, 2020, a fire destroyed a large section of Hot Springs’ downtown business district, which encompassed much of the 300 block of North River Street.

Lost in the fire were a total of five businesses, including The Vault, China Buffet, Heartsong Quilts, Power’s Guitar and Gus’ Best Ice Cream, as well as the home of the Powers family, which was located behind their three businesses.

According to local historian Karl Bochert, the structures that housed the five businesses – the Central Block building (The Vault/China Buffet) and the G.W. Montgomery Block building (Heartsong Quilts) – represent a significant part of Hot Springs’ history shortly after the turn of the century. Their creation, he said, helped to unite what were then known as two very distinct halves of the community – upper town and lower town.

“Upper Town” featured a very thriving business district which included all of Minnekahta Avenue as well as Main Street, which is where Golden West is currently located. That area of town was where the majority of the tourists who visited Hot Springs stayed after departing their train car. The businesses along Minnekahta and Main Street included multiple lodging establishments as well as many retail and service shops and professional offices, not to mention many of Fred Evans’ business ventures. “Upper Town” was also where most of the town’s “upper crust” lived, Bochert said.

“Lower Town” was where the Petty family resided and is where they focused their many business interests. This side of town also had its share of prospering businesses, including in large The Plaza Motel, which was located where the Bering Building now stands at the stop light. “Lower Town” featured a few more of what to be considered ‘blue collar’ businesses as well.

What both halves of town had in common were numerous bathhouses, which was the primary uniting aspect of both Upper Town and Lower Town, Bochert said.

What geographically separated the town was a barren area along River Avenue (now North River Street), with the Petty Livery being the only business in that part of town. In fact, its location blocked the road between the two halves of town.

“People had to quite literally go down into the river to get past and go from one half of town to the other,” said Bochert.

In the very late 1800s, the leaders on both sides of the community squabbled about where to establish a school and city hall for its residents. They ultimately came to a compromise, which saw them take a map of the town and fold it in half. The creased line on the folded paper map then turned into the eventual location of the current City Hall and the Hot Springs School (now the Pioneer Museum on the hill).

Following the construction of the school and city hall buildings, it was also decided that a commerce center needed to be established in the area as well. This led to the construction of the Central Bank (The Vault building) and the Montgomery Building (Heartsong Quilts). The creation of those two structures then led to additional development of River Avenue, which ultimately saw the area’s previous void of buildings fill up within a five year period.

The following information provides a look back at the history of that portion of what is now North River Street (formerly River Avenue). This was mostly compiled and written by Karl Bochert, but also includes some information put together by the late Helen Magee from newspaper reports and available at the Hot Springs Public Library.

NOTE: The ‘look back’ includes a listing of some of the businesses that occupied the structures over the past 100-plus years, but is not a complete listing.

(The Vault and China Buffet)

Owners E.S. Kelly and M. Flannigan break ground for their new building. It is to be 23 feet high, 112 feet on the avenue and 70 feet deep on the alley adjoining the George Montgomery building (now Heartsong Quilts). The stone is from the Petty Quarry. Plans include opening a bank, which will be called the Central Bank.

Kelly and Flannigan let the contract for their new block on River Avenue to Bond and Cruickshank. The building included space for three store rooms and a banking room.

W.N. Hunter & Co., owned by the Hunter brothers of the Lead-Deadwood area, rent the remaining vacant rooms in the Central Block and move in their goods.

NOTE: The Hunter brothers had been developing businesses and building commercial structures in Hot Springs. They had operations of the building and their commercial business in the Hunter Block, which was later known as the Evanston when it was  owned by Carol Goddard. Today it is owned by Gary and Terry Slagel and houses the Chautauqua Artisans Market and Fall River Fibers. The Hunter Store carried a general line of merchandise, household goods and groceries.

C.X. Johnson enlarges his hardware store by opening an archway into the room next to the Central Savings Bank and moving part of his stock.

NOTE: C.X. Johnson’s expanded areas of the building operated for many years as a hardware store through several owners and became the first location of the Coast-to-Coast hardware store, owned by the Blatchford family. They later built their new building in lower town moving Coast-to-Coast into its new commercial building that is known as ACE Hardware today.  The portions of the Central Block vacated by the move of Coast to Coast became a restaurant and other retail businesses, including Western Trails Clothing that operated in the early 1970s and was closed by 1976. The building was vacant for short periods as the economy was the 1970s.

The Central Savings Bank, which has operated under this name for about 27 months, changes its name to The Stockman’s National Bank.

NOTE: The bank was in continuous operation until the regional depression closing in 1924. The bank went through closure proceedings that were finalized in 1926. The building was never to be a bank again.

The Stockman’s Bank closes its doors.

The Stockman’s Bank building is remodeled for a Dime Store.

After the sandwich shop, the Central Block building property became part of a corporation owned by Gordon Killinger. The former bank portion of the building’s three sections (or rooms) became Killinger’s Floor Coverings and Carpets, which was a portion of his long-held operations that were underway in the Fargo Mercantile Building (now home to Junk & Disorderly) and the Western Hotel upstairs (now home to Fall River Suites).

The northern portion of the Central Block building becomes known as the Char Chief. In the 1970s and 80s it was operated by Bob and Nancy Wilson for Dick  Turbiville, under the name of The Riverside Restaurant.

NOTE: Bob and Nancy Wilson and their son and daughter went on to manage Maverick Junction and opened their Western Ware Store there.

Also in the 1970s, the southern portion of the building (the former bank portion), Gretchen Killinger Curtis develops a gift souvenir and soda type shop known as the Honey Bee.

Another small portion of the frontage next to the former bank operating for 20-plus years was a barber shop.  Several barbers had their chairs there. In 1976, it was for a short time a real estate office.

The southern portion of the building is purchased by a group of local men and converted into The Bar. They eventually expand and take over frontage that was the barbershop to make way for a larger area for live bands and expanded dining. The original owners included Tuffy Halls, Mike Hattervig, Don Eisenrich, Russell Stewart and Tom Sedlacek.

A second-hand store known as Bearly Used opened and operated for several years in the northern portion of the Central Block building. After closing, it was bought by Charles and Sandy Arsenault who moved the fixtures and content to Custer.  This vacant building portion held by a Colorado businessman later sold to become the China Buffet.

After the original owners of The Bar sell off their remaining interests to Pete Kearns, he sells to Shane and Cristin Stewart, who remodel it and convert it to The Hot Springs Vault. They eventually sell to Roland Taylor in July 2018.

Following the sudden death of Taylor, his family sells The Vault to its current owner Greg Gunwall.

Built two years prior to the Central Block building, this stone structure was constructed of local Petty Stone Co. Sandstone located east of Hot Springs.  The front was of cut-faced block columns and rubble block exterior walls. The owner, George Montgomery, was a very innovating businessman and was the first to use printing on his wrapping paper to advertise his store, before the invention of paper sacks. He had the idea to color concrete and used coloring in concrete to denote his name in the sidewalk as one approached his store, which was the only example of such thing in the county.  Montgomery’s store carried general merchandise, household fixtures, and things like frames, clocks, stoneware and carpet sweepers.

The Montgomery building’s northernmost occupant of long standing was Rose Englebert who owned and operated Rose’s Bar, which included a lounge and card room for her attendees. She passed away in 2001 at the age of 93.

The Char Chief Restaurant, and later the Riverside Restaurant, (housed in the Central Block building) acquired a vacant southern portion of the W.G. Montgomery Block and opened the Black Forest Lounge. During the remodeling for the lounge, the fireplace was built and an access way was cut through the stone wall in back of the bar which allowed the bartender to place and receive orders in the restaurant.

NOTE: This opening in the stone wall, which was later covered back up, then connected the Central Block Building and Montgomery Building and likely made it much easier for last month’s fire to spread quickly from one building to the other.

Vacant after the lounge closed, a leather shop owned by Dan and Louise Kursave, operating in Buffalo Gap, moved into the premises for several years.

An antique store called Timeless Treasures, owned by Doug and Kathy Price, opened in the former Kursave Leather Works, which occupied the southern half of the Montgomery building. Upon Rose Engelbert’s death and the family’s dispersal of Rose’s Bar, they purchased the northern half of the building as well. The renovation then united the building into one business.

For a short time as the owners performed the renovation, they rented the northern space to Gwen Nowlan, who was the City Building Inspector at the time. She was also a businesswoman who had an interior decorating and select furnishings shop.

The Powers family purchases the Montgomery building and opens Heartsong Quilts. The portion that was part of Nowlan’s interior design business becomes Powers Guitar Shop.  The Northern most sloped roofed building adjoining the Montgomery building was Lulu Crawford’s sandwich shop in the 1950-60s.  Rose Englebert used it for storage while Powers’ used it as Gus’ Best Ice Cream shop.