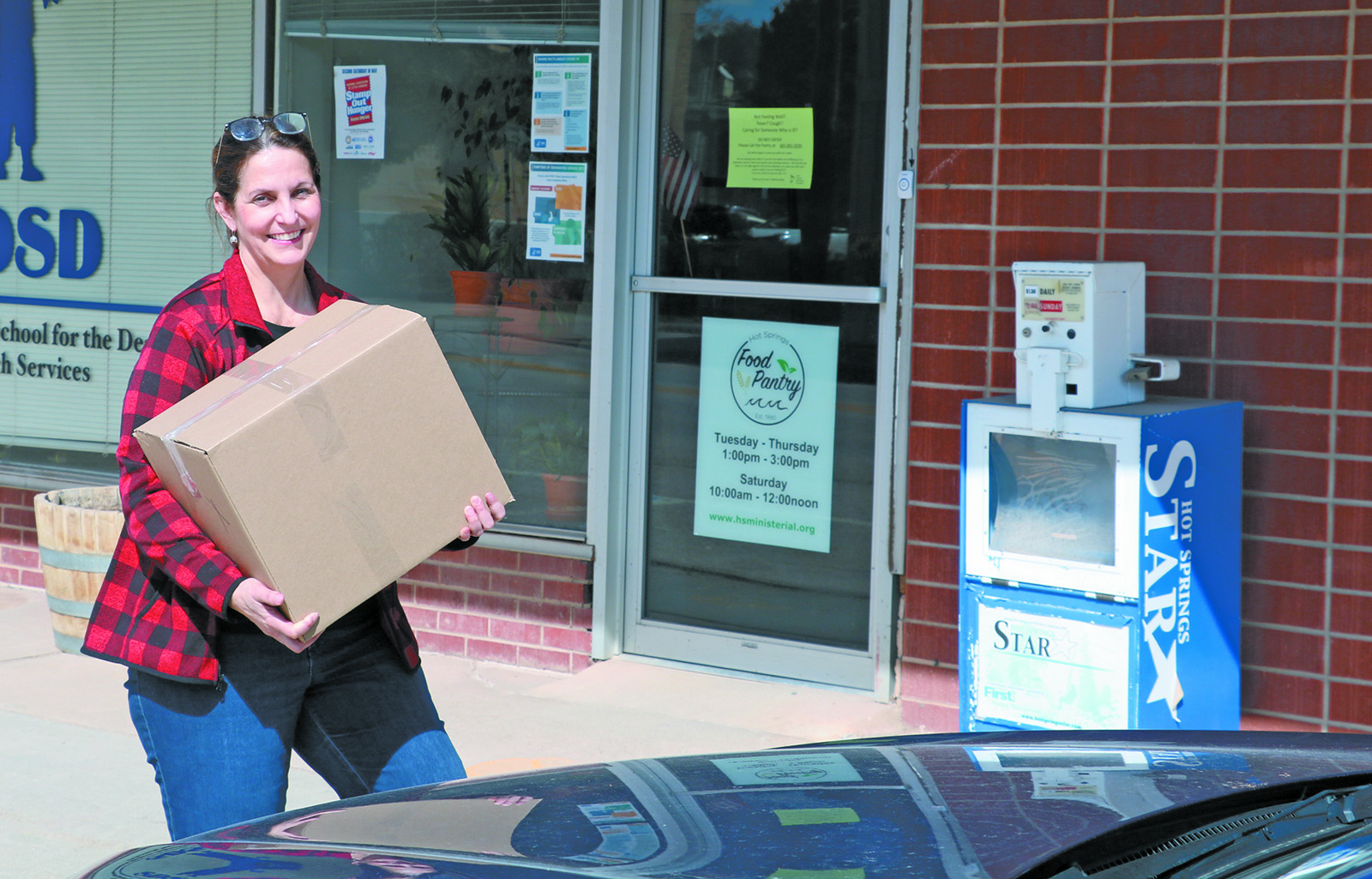 Hot Springs Food Pantry Manager Kay Birkholt holds one of the boxes of food which will be distributed to clientele beginning this week through a new curbside service offered in the food pantry’s new location in the former Hot Springs Star office at 107 N. Chicago in downtown Hot Springs.

HOT SPRINGS – As most all area businesses continue working to adjust their operations to help slow the spread of the COVID-19 coronavirus, the Hot Springs Ministerial Food Pantry is not only altering ‘how’ it serves its clients but also from ‘where’.

Last Friday, March 27, the Food Pantry officially moved across the street into its new home in the former Hot Springs Star office. The large space inside the building, which is still owned by the Rapid City Journal, became vacant last December after the newspaper business was purchased by the Fall River County Herald.

The move gives the food pantry double the space from their previous 800 sq. ft. location, which was in the back of the Sandstar Building. Their new expanded office now features a large reception area, a more open shopping area for patrons to select optional items, a meeting room, and an expanded storage and work space. In addition, there is also a seperate room being setup to temporarily house the Basic Needs Boutique, which had been located in the United Churches but closed recently due to the end of the Ministerial Association’s Thursday night Spaghetti Feeds.

According to Kay Birkholt, who serves as both the Ministerial Association Secretary and the Manager of the Food Bank, the larger location will no doubt help the food bank. She beams with excitement when she talks about not only their new space, but also the potential opportunities of expanding their current services.

While nothing specific has been implemented yet, Birkholt said that many very active members of the Ministerial Association, including Pastor David Cook with the United Churches, have already looked into starting such things as a First Aid training course for mental health, longterm recovery disaster assistance program, as well as a mentor program, through Rapid City’s Love INC, that helps family’s in poverty get to the root of their problems by offering a ‘hand up vs. a hand out.’

But for now, Birkholt said the Food Pantry’s primary focus remains the same, and that is to provide nutritious grocery items to local families in need. That mission however took on a new process this week as they moved to Curbside Service only, beginning on Tuesday, March 31, in their new location at 107 N. River Street near the downtown stoplight.

Hours of operation remain the same as always, which is Tuesday, Wednesday and Thursday from 1 p.m. to 3 p.m., as well as on Saturdays from 10 a.m. to 12 noon. But for now, instead of entering through the front doors of the Food Pantry, their clients can simply pull right up to the curb and be greeted by food pantry staff and volunteers for their monthly grocery items.

Birkholt said the pantry has a list of around 300 people whom they serve, which includes all members of a family. Typically, under normal operating procedures, their clients come in once a month and are given a set amount of standard items that includes canned vegetables, cereals, pasta and other things. They can then go to the “client choice shelves” where they can select many more things, to include an item from each of well over a dozen different shelves.  In addition, clients can then also choose frozen meat items from four different freezers, labeled for hamburger, venison, fish and also bologna. The amount each person can take is dependent on the size of their family, Birkholt said.

In order to modify their service to work more streamlined for curbside, Birkholt said they received pre-stuffed boxes from Feeding South Dakota which contained about 18 pounds of food. The Hot Springs Food Pantry volunteers then added an additional 13 pounds to those boxes to provide a total of over 30 pounds.

When clients pull up to the curb of the Food Pantry, they will be checked in and then given their 30-pound box. They will then also be able to select the kind of frozen meat they want from a cooler and also given a bag of personal-care items.

Birkholt said anyone living in Fall River County is eligible to receive food at no cost from the Food Pantry – no one is turned away. Patrons need only show a picture ID to confirm their address. Clients are permitted to pick up food once per month, but in the case of an emergency, they can come back for additional items with a voucher from one of the area churches. There are about 20 churches that make up the Hot Springs Ministerial Association, which are all listed in the Fall River County Herald-Star each week in the Church Directory (on page B8 this week).

The Ministerial Association’s involvement in the Hot Springs Food Pantry dates back to approximately 1990, according to Birkholt’s research. She said there had likely been a food pantry prior to that date, which at one time was operated out of the Odd Fellows building. It moved around and found its way into the basement of St. Anthony’s Catholic Church, which is possibly about the time the Ministerial Association took over operations, with it likely being a tie-in to their “needy fund,” Birkholt believes.

One of the Food Panty’s earliest champions was Leo Hagenson, who helped operate it for many years. Birkholt said today, a long list of volunteers continue to keep it vital, most notably Chris Martin and Amy Pucket.

The food that the pantry provides comes from a variety of sources, with much of it derived through donations and food drives coordinated by the local churches, Boys Scouts, Fall River 4-H Clubs, and the Post Office’s “Stamp Out Hunger” program, to name a few. The Food Pantry also purchases a lot of their food from the organization Feeding South Dakota, which offers food at a low cost and sometimes no cost.

Birkholt said that both of Hot Springs’ grocery stores – Sonny’s Super Foods and Lynn’s Dakota Mart – also play a vital role in providing food by making them aware of special prices on many of the more popular items. There are also a number of private individuals in the community who regularly stop in to drop off a bag or two of food, Birkholt added.

For more information about the Hot Springs Food Pantry, visit the website www.hsministerial.org or call 605-891-5030.