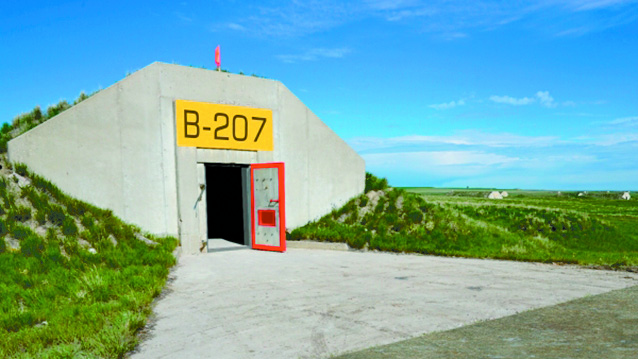 This photo from the website terravivos.com shows one of the bunkers located in the Igloo area of southwestern Fall River County.

EDGEMONT – The current coronavirus pandemic is quickly gaining a chokehold on American society. People are desperately trying to stock up on certain items including non-perishable foods, sanitizers and cleaners, and strangely toilet paper – even though diarrhea or increased bowel movements are not among the symptoms. Supply chain disruptions and suspension of normal social gatherings in eateries, bars, and clubs is putting everyone on edge to some degree.

Coronavirus is exactly the kind of thing that most folks would think of when considering the merits of one of the numerous ‘prepper’ or ‘survivalist’ camps that have sprung up in recent decades. It threatens to shut down or drastically alter contemporary American life for potentially months to come. It was said on National Public Radio’s Monday broadcast of Morning Edition that a vaccine for the virus may not be available for another 18 months. It is becoming more apparent with each passing day that we’re in drastic times that may well call for some drastic measures, the kind that prompts many ‘doomsday’ subscribers to consider an investment in a facility that offer the chance for continued existence when conditions outside their boundaries are slim.

As most local residents are aware, Fall River County is home to such a complex.

Vivos xPoint is located south of Edgemont and is known to local residents simply as “Igloo,” which dates back to the days when it functioned as the Black Hills Ordinance Depot, a U.S. Army storehouse for bombs and munitions that was in operation from 1942 to 1967 when the base was completely shut down. It was known as ‘Igloo’ because the shape of the munitions storage buildings resembled the Inuit dwelling structures made from ice. The military community at the site enjoyed public schools, a hospital, post office, church, as well as amenities like stores, a theater, and a swimming pool.

The property was then sold to the City of Edgemont, which then sold it to local farmers and ranchers who produced a variety of livestock including pigs, sheep, and cattle on the expansive 18-square mile property. For years it was in agricultural production until Robert Vicino, founder and CEO of Vivos acquired it in 2016. Now formally known as Vivos xPoint, the company website describes it as “a huge underground survival shelter community nearly the size of Manhattan, strategically located in the southwestern corner of South Dakota, USA, with over 575 private bunkers - each 2,200 square feet, accommodating up to 10,000 people when built out.”

According to Lyle “Skeeter” Goodman, who serves as the primary company representative on site, future development plans include features similar to those once-offered by the former Army base back in the 40s, 50s and 60s, but do not presently exist. Goodman conducts tours of the complex for prospective buyers.

“Some people expect a thriving community-based set-up including church, theater, gymnasium, and places to eat,” Goodman said, adding that id doesn’t have anythign like that now, but is something that is planned for the future of Vivos.

“People should already have their bunker prepared by having the bunker built out and their food brought in,” Goodman stated. When asked as to what would be done in the instance of an infected person with mild symptoms that were undetected, Goodman responded, “The plans to deal with a threat like coronavirus are being developed.” When asked if any sort of a medical facility existed on-site, Goodman responded that no such facility existed.

Despite not yet having a developed plan to address the COVID-19 pandemic specifically, Vivos appears to be still be catering to those who have come to feel a sense of desperation and vulnerability.

An initial response from the company to an inquiry by the Fall River County Herald-Star last week would make it seem that the company is offering something of a safe haven in the present troubled times.

“Vivos is an epic humanitarian project, fully prepared for whatever and whenever events may unfold,” an email from This email address is being protected from spambots. You need JavaScript enabled to view it. stated. “As a result of the current Coronavirus threat and the ripple of subsequent consequences, the demand for Vivos has exponentially grown, with people no longer inquiring on a curiosity point of view, but now ready to get off the proverbial fence and secure a spot while they still can.”

The same response boasted that “inquiries and applications are up over 1,000% year after year” and stated “sales are up over 400% and growing exponentially.” Nowhere in the response were any details given as to how xPoint was designed or prepared to deal with specific threats posed by COVID-19.

The Fall River County Herald-Star contacted Vivos to inquire as to how the company was prepared to deal with the threat posed by COVID-19 at their xPoint facility. Media contact Barbi Grossman responded by email with the following statement.

“Members may quarantine themselves in their bunkers, limiting contact with all others on their way into Vivos xPoint. Once there are reliable test kits available, we will test all parties entering the complex.” So theoretically, with no prior testing of lessees being conducted up to this point, an infected individual could enter the complex and there doesn’t appear to be a plan in place to address the presence of the virus within the facility.

Grossman went on to state the following:

“Vivos is not about quarantine from a pandemic, but rather having a safe haven and surviving the aftermath of things to come. What will you do when there is no food on the shelves, no money to purchase things, desperate people roaming house to house to get what you have to survive? How will you defend your home and family, alone in your small house in the middle of a society that didn’t prepare.”

“We are on the verge of a depression, soup lines, etc., and that is just the next phase of what we are all will be going through. The dominos are falling. People are waking up, but for most it is already too late to prepare or find a real survival solution,” she continued.

Grossman was asked how xPoint would offer protection should a particular threat affect transportation and access to the facility.

“We’re not here to ‘convince’ or ‘persuade’ you of why Vivos is the most comprehensive life-assurance solution for virtually all risks, including the current pandemic and the aftermath of threats yet to come,” she responded.

Grossman suggests the company doesn’t have to work very hard at selling the benefits of having the opportunity to take refuge at xPoint due to member having already reached their own conclusions.

“Our members have all done their own evaluation with a great deal of due-diligence and education on all of the threats mankind now faces. Each member has their own priority of concerns and why they are securing a bunker at Vivos xPoint. Ultimately, they all meld together becoming the mesh of the like-minded community, like no other on the planet.”

In reference the distance that lessees would have to travel to their bunkers in Igloo, ‘Skeeter’ Goodman said, “The closest lessees are in Cheyenne and Colorado so most folks are more than a day drive away. There are also folks from Georgia, Florida, Texas, California and Alaska.”