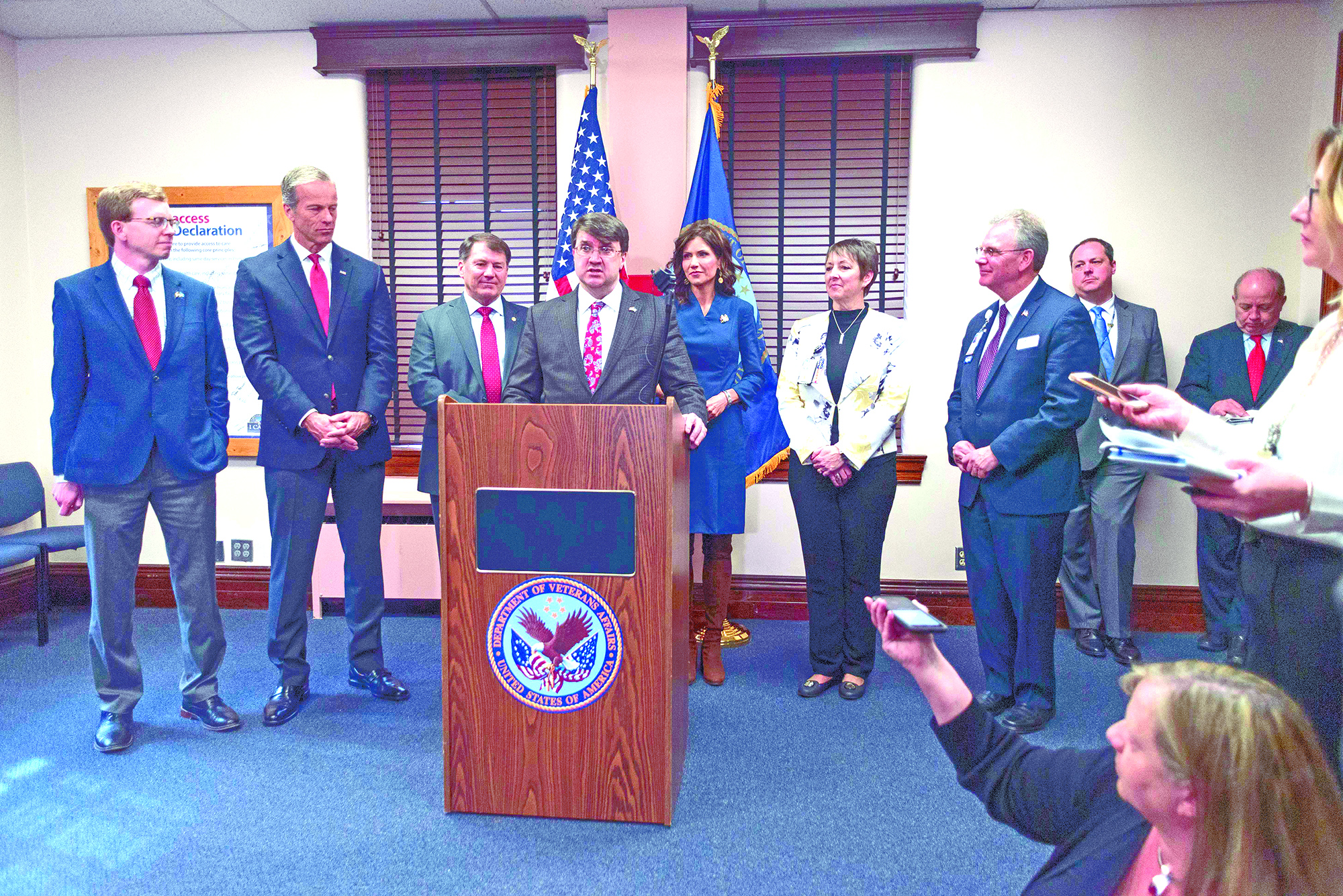 HOT SPRINGS – Three times during the course of a 23-minute press conference at the Hot Springs VA this past Monday morning, the nation’s Secretary of Veterans Affairs Robert Wilkie was quoted as saying the words that many Hot Springs area residents have been waiting to hear for more than eight years.

“This facility is not going to close.”

Wilkie, who has been the VA Secretary since July 2018, was in Hot Springs on March 2 as part of his second visit to the Black Hills in the past six months, after visiting Fort Meade late last year. He noted during Monday’s press conference that one of his main focuses has been looking at the “American West and Native America,” which he said, are “the two groups that serve in the United States armed forces greater than anyone.”

He was joined in Hot Springs this week by South Dakota’s entire United States congressional delegation and Governor, who have been steadfast in showing their support of keeping the Hot Springs VA open.

Accompanying Sec. Wilkie and also speaking during the press conference were Senators John Thune and Mike Rounds, Representative Dusty Johnson, as well as Governor Kristi Noem. Many of them have been a part of the effort ever since the VA’s reconfiguration plans to close the hospital and domiciliary and replace them with a community-based outpatient clinic were first announced to a crowded Mueller Center Theater on Dec. 12, 2011. Those plans were then later confirmed in a 2017 Record of Decision announced by then-VA Sec. Bob McDonald. However, later that same year, newly appointed VA Sec. David Shulkin then announced that the VA was going to put the plans on hold for further review.

“I was given ideas today that I had not seen,” Wilkie said, in reference to a meeting he had with various groups representing local Veteran interests just prior to the press conference. “I think it’s vital that we maintain this place.”

“It will not close. It will not close,” he repeated. “But we have to be more creative in making sure that it stays vibrant and healthy, and I think I got some great ideas today of how to continue the legacy that began in this space at the very beginning of the 20th century.”

Later in the press conference when asked about the new ideas he had heard, Sec. Wilkie said, “The ideas were fascinating.”

“I grew up in the military,” he said. “The things I was reading today are things that are familiar to me. Recreation Center for Veterans; making sure that Veterans are fully integrated into the community, not just where they live, but with services in their community – be they medical or be they educational. Enhancing the resources that this state has. To train our Veterans and give them the educational opportunities they want, in terms of vocational education or academic education.”

The ideas Sec. Wilkie described were part of a proposal presented to him by Rich Gross, who was representing the Save The VA group in a meeting held at the VA earlier in the morning. Along with Gross, others in the round table discussion were there representing other Veterans groups such as the American Legion, VFW and DAV. (See related front story about OpVet below)

“It was incredibly well thought out,” Wilkie added. “It was a collaborative effort, not just with people who are elected, but with people who actually work in the community, work here and those who use these services. And that was probably the most impressive thing.”

Sen. Thune, who had been engaged in the effort to keep open the Hot Springs VA since the realignment was first announced  in 2011, said he and his fellow congressional leaders were very pleased that the Secretary took the time to visit the Hot Springs VA. That was something they had been working to see happen for awhile, he said.

He added that he was impressed Sec. Wilkie has agreed that the Department of Veterans Affairs will take another look at their plans for realignment, but added that “the best thing that could happen, is that they would reconsider and perhaps rescind that record of decision in 2017. Take a fresh look, start the process over and actually get the buy-in from the veteran community here,” he said.

“We think we have a unique, fabulous situation here with a facility that is uniquely situated, both in terms of its geography, right here in the Black Hills, but also maintains a lot of the features of some of the great buildings of the past,” Thune continued. “It’s a place where our veterans can really come to heal, to rebuild, to recoup and to get back on their feet. And so we want to see that happen here in Hot Springs, South Dakota. This is a Veterans Town and so we’re grateful.”

Sen. Rounds said he attributes Sec. Wilkie’s stated willingness to reconsider the 2017 record of decision, to close the Hot Springs VA hospital, due to the fact that “there were veterans and members of this community that have worked very, very hard to layout alternative plans.”

“They did a great job today of sharing their vision for the future for this facility here, and the community of Hot Springs,” Sen. Rounds said. “My ‘thank you’ goes out to them, because they have looked at this in terms of what is best for Veterans in this part of the country. And what they have shared today is something very, very special. And if the Secretary will go back and look at that record of decision there is an efficient path forward of putting together a plan I think the Veterans here will get back behind.”

Sen. Rounds then described the current effort to keep-open the Hot Springs VA as being similar to how a collaborative effort help keep-open Ellsworth Air Force Base, when it was on the “chopping block” several years ago.

“It was a combined effort of the community, the state, and the congressional delegation – at that time I was Governor,” Rounds said. “We worked side-by-side to get this done in a cooperative effort. Today, what we’ve seen here, is a VA Secretary who has said ‘I’m open-minded, I want to do what’s best for the Veterans.’ You’ve seen a community come together; you’ve seen the state back that community and you’ve seen a united congressional delegation with the Governor all speaking with the same message. I think we can see some success in our future, here in Hot Springs.”

Governor Noem, who has also been on board and backing the effort to keep-open the Hot Springs VA since the effort started, said, “Hot Springs is The Veterans Town and its an incredibly special place.”

“The original discussion about this facility started back in December of 2011,” Gov. Noem said. “And this community and this state and even national organizations rallied behind Hot Springs in how this facility serves not only Veterans here, but in surrounding states and our tribal nations.”

Gov. Noem said she was excited for the innovative ways in which the Hot Springs VA can deliver care and be an example to the nation.

“This is a National Historic Landmark,” Noem said. “It is special for many, many reasons but most of all for how it cares for our Veterans. And it will continue to do that for decades into the future. We appreciate the Secretary saying he will go back and look at the record of decision. The fact that this facility will stay open and continue to serve our Veterans, that’s incredibly important for me as Governor, but also for our entire state and our country.”

Rep. Johnson said a lot has changed since 2011, when the announcement was made to realign the Black Hills Health Care System, “but I think three things have not changed.”

“First off, this VA facility has been a place that’s delivered outstanding outcomes for Veterans,” he said. “Number 2, this community of Hot Springs has been committed to wrapping its arms around the Veterans of this country. And Number 3, that we have had a delegation that has been steadfast, has been resolute and has been united in the right way forward for Hot Springs.”

Speaking to Sec. Wilkie, Rep Johnson then said, “We have heard from you a sincerity and a commitment that at times we have felt has been lacking from senior leadership at the Veterans Affairs. The fact that you are here today means a great deal. Not just to the delegation, not just to Hot Springs, not just to the state, but to their entire region that is served by this great facility.”

When asked by a member of the media if he saw the Hot Springs VA as a big part of the VA nationally moving forward, Sec. Wilkie said, “Absolutely.”

“I’ve said since I’ve been Secretary, that it is the needs of the Veteran not the needs of the institution of VA that has to be central to everything that we do,” Wilkie said. “With a community that is this integrated into the care of Veterans, I think that’s a very easy thing to do.”

Part of the Secretary’s trip to Hot Springs included a time to visit with area Veterans. When asked what Veterans had to say about the care they were receiving at the Hot Springs VA, Sec. Wilkie said, “We have the highest patient satisfaction rates VA has ever had. They sit at about 90 percent. That’s evident here.”

“People want to go where the folks they are looking to for service understand the culture and speak the language,” he added. “That’s why I’ve said this facility is not going to close. That is what is unique about VA.”

“Even with the Mission Act, that opens the aperture on access to the private sector by our Veterans, we have seen a record number of appointments at VA,” Sec. Wilkie said. “Sixty million appointments last year. That’s 2 million more than the year before. And even (with) offering Veterans an option – if we can’t serve them in a timely manner – the majority want to stay where they are comfortable, and they are sitting next to people who have shared their unique experiences. Or as Oliver Wendell Holmes said during the Civil War, ‘the incommunicable experience of War.’”

“That’s why VA has to remain robust. So what I see here is just a validation for our very reason for being here.”