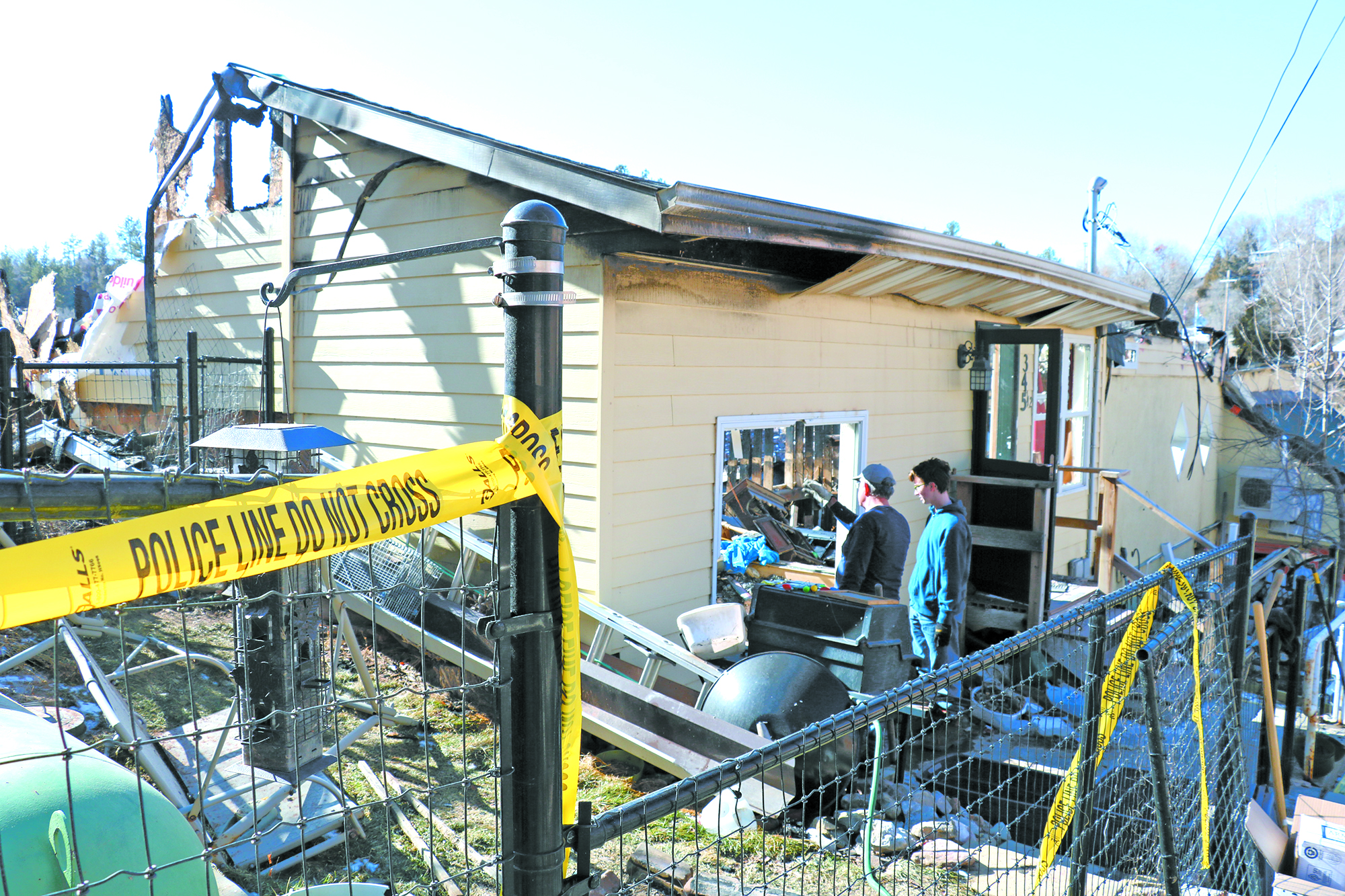 Brian Powers and his son Jesse look inside what remains of their home through a broken-out window this past Saturday morning. The morning of Feb. 22 was the first opportunity the family had to begin going through their residence to find items that could be salvaged following the North River Street fire that started last Monday night, Feb. 18, and burned four businesses in addition to their home.

HOT SPRINGS – It was God who brought them to Hot Springs from Florida in 2008, and it’s also God who will now provide their direction moving forward after last week’s tragedy of losing their home and businesses in the North River Street Fire, according to the Powers family.

“God gives and takes away, and what he has given us now is a peace in knowing that this is all part of his plan for our family,” said Ann Powers this past Saturday morning, as she and her husband Brian, their youngest son Jesse, 16, and a few other friends began going through the rubble of what is left of their property.

In addition to their home, the Powers family also lost three businesses which included Heartsong Quilts, and also their son Tom’s business called Powers Guitars, along with their seasonal Gus’ Best Ice Cream.

“It’s devastating, and I’m going to try not to cry, but I’m positive God has a plan,” Ann said, adding that if there is one thing she hopes others can take away from this incident is finding a clearer path to God to see all of positive things that He provides.

Standing atop what was an outdoor seating area and looking at the back of their house, Ann pointed to where firefighters had worked to protect a nearby propane tank on the northeast corner of the property. Their efforts in protecting the tank also helped save a portion of the nearby exterior wall of their house.

“I know I have some crystal behind that wall, which I’m pretty sure we can probably salvage, once we can get to it,” she said.

They didn’t believe they would find a lot of salvageable items, but there were a few including some wooden furniture along with some other personal items, like homemade art and other things that may be slightly damaged but hold enough sentimental value to make them worth keeping. All of these things were being set aside along a fence to be further inspected for another time.

A little bit later on in the morning, Brian gleefully said, “Hey Ann, look what I found!” as he handed her a small box of undamaged items which included some family photos. Ann excitedly accepted and quickly began going through the box to see what was all inside.

Recalling the night of the fire, Ann said they were home watching television when there was a “bang, bang, bang” at their door. Thankful that the firefighters even knew to that their home was located behind the businesses, Ann said they quickly grabbed a few things like some cash, a couple of laptops and a fireproof strong box where they kept important documents.

Other than the clothes on their backs and the shoes on their feet, that was all they took with them. Ann said that as they were gathering their items, she assumed that based on where they were told the fire was apparently located down the block, they would probably be able to return to their homes in 20 minutes or so. Instead, they spent the night in a motel.

Now looking at the complex skeletal remains of The Vault, China Buffet and their own home and businesses, its understandable how quickly the flames swept from one place to the next. While each location was separated by a wall of stone, Ann pointed out how there were also some open spaces in those walls that were only covered by thin pieces of wood.

The Powers family – which includes Brian and Ann, plus a daughter Christine and three sons Sam, Tom and Jesse – moved to Hot Springs in June of 2008 after visiting the Black Hills on a vacation in their pop-up camper. At the time, their four children were aged 13, 11, 9 and 4.

They opened the quilt shop in October of that same year as a means to minister their faith through quilting. The first couple of years were difficult ones for the business, but they eventually found their niche selling unique Aboriginal fabrics primarily to tourists. As their children grew older and caught the entrepreneurial spirit as well, the family business expanded as their son Tom opened his own guitar business and as he and the others all chipped in to help run the ice cream shop as well. The family’s Heartsong Quilts recently closed down its storefront retail business but it remained as a very active and flourishing online business.

Ann said their family businesses were located in what was once known as Rosie’s Bar, many years ago. The portion of the structure which they remodeled into their home was known as the “flop house,” she said, while adding that the story they were told is that it served as sleeping quarters for some of Rosie’s patrons who were too drunk to make it home.

The fire completely gutted the inside of their quilt business, which is no surprise since it was primarily filled with wood, cotton and fabric. And while much of the interior of the ice cream shop and the northeast corner of their home didn’t go up in flames, it was all destroyed through smoke and water damage.

Ann said they have no plans of rebuilding their home or businesses in the same location, and whether or not they stayed in Hot Springs is being put in God’s hands. They are however considering a possible temporary location to operate Gus’ Best Ice Cream this summer.

She added that their property and belongings are covered by insurance, so they will be okay.

She and Brian both expressed their sincerest appreciation for the tremendous outpouring of love and support by the community and their church family at Southern Hills E-Free Church. The Powers are currently living in the home of Pastor Mark Crossman, who recently moved to Colorado.

“At the Crossman’s we have furniture, a kitchen and everything we need,” Ann thankfully said. “We’re slowly replacing our clothing but are appreciative for the temporary clothes that people have donated to us.” She added however that one of the things she is missing the most is her sewing machine.