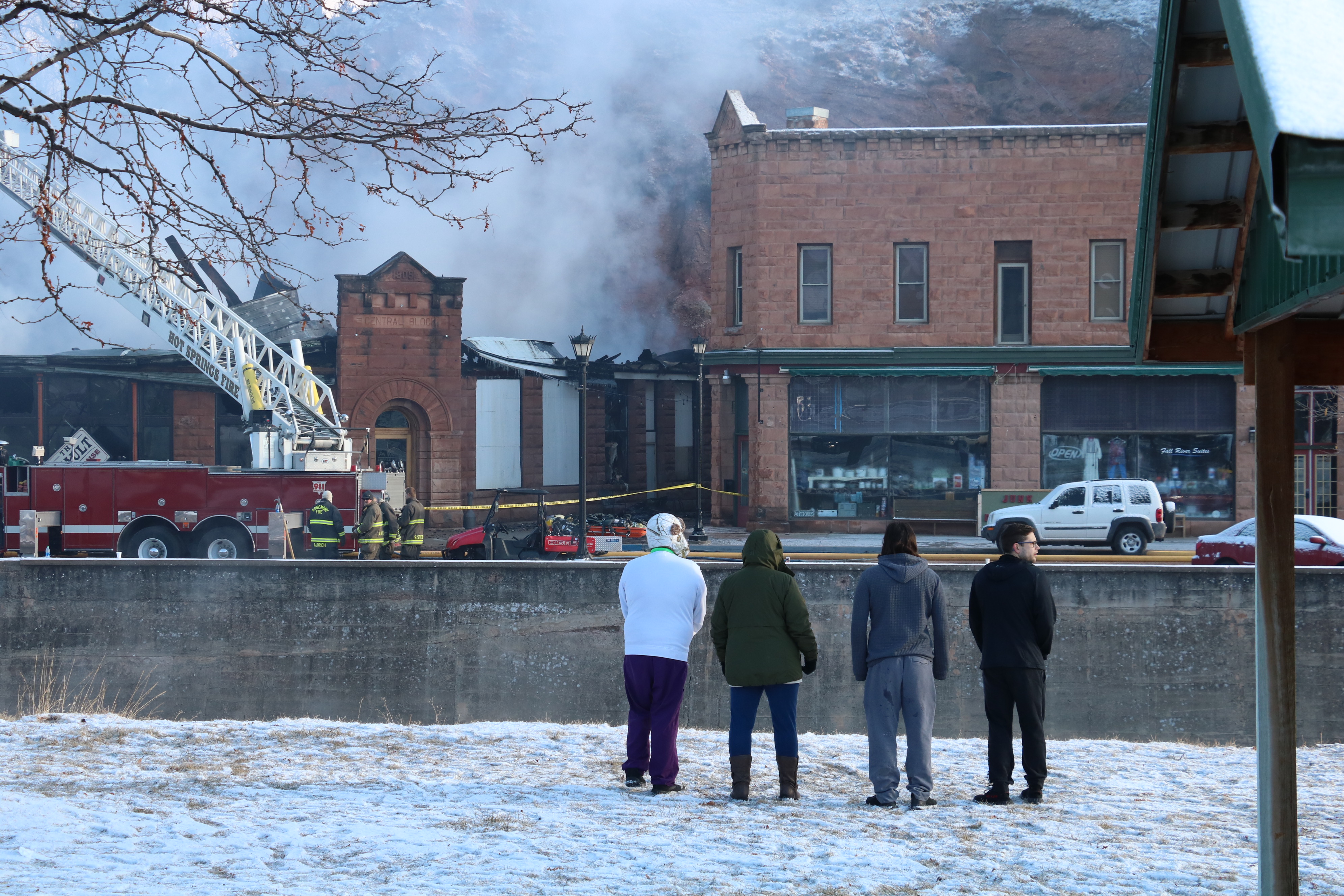 Tracey Etchey, second from left, stands in Centennial Park with some others as they look across the river towards the Fargo Mercantile where she operates her business Junk & Disorderly on the main floor.

HOT SPRINGS – In addition to The Vault, China Buffet, Heartsong Quilts, Gus’ Best Ice Cream and the home of Brian and Ann Powers, also severely impacted by last week’s devastating fire was the historic sandstone Fargo Mercantile building at 321 N. River, just across the alley from The Vault.

Owned by Tavi Loeks, the building is home to Fall River Suites upstairs and the antique/second-hand business Junk & Disorderly on the main floor, which is owned by Tracey Etchy.

Loeks said the fire temporarily displaced six people, including herself, who live in the suites upstairs, where five of the six units are filled with long-term tenants. The upper floor of the building had previously all been used for guest suites, but last fall, Loeks, who is also employed as an occupational therapist, said she converted her business plan for longer-staying tenants.

Thanks to some intensive efforts by a cleaning company that used a ozone thermal fogging machine to eliminate most all of the smoke smell, the tenants have now all moved back into their residences. Loeks said she welcomed the tenants back into their homes with a pizza party on Sunday, Feb. 23.

Loeks said the thermal fogging also helped eliminate the smoke damage to the retail items in Etchey’s Junk & Disorderly business, and that Etchey attempted to reopen over the weekend. She however was forced to close again due to some other lingering odors, but she expected the business to eventually open back up in the near future.

The biggest concern and impact from the fire is the water damage to the basement and the ground surrounding her building. Loeks said Etchey, Eric Peet, Nicole Lucey and herself spent six hours pumping water out of the basement the day after the fire on Tuesday, Feb. 18, using equipment donated to them by Accouter Rental in Hot Springs. The basement was used primarily for storage, and everything down there was destroyed by the water, which was primarily construction supplies and some equipment.

With the water from the firefighting efforts finding its way into Loeks’ basement, the concern is that it caused tunneling issues in the soil which will provide a path for rainwater to follow as well. There is also concern for how well the walls are supported if a considerable amount of soil has been displaced.

Loeks said one possible solution will be to do some mud-jacking around the building to add the needed support. She added that it will likely take until the end of this coming summer for the repairs to be completed, which will included cleaning the soot-stained exterior walls of her sandstone building as well.

She added that the building has been for sale and remains on the market.

“It is an amazing building and it will be better than ever when the cleaning is complete,” Loeks said. “Honestly, the building has so much potential. I look forward to it supporting the Hot Springs historical district as much in the future as it has in the past.”

Loeks added her appreciation to her tenants and to her employer Fall River Health Services throughout the ordeal.

“The hospital has been understanding and accommodating as well, with my occupational therapy schedule adjusted as needed,” she said. “Patients, tenants, leasee have all been wonderful!”