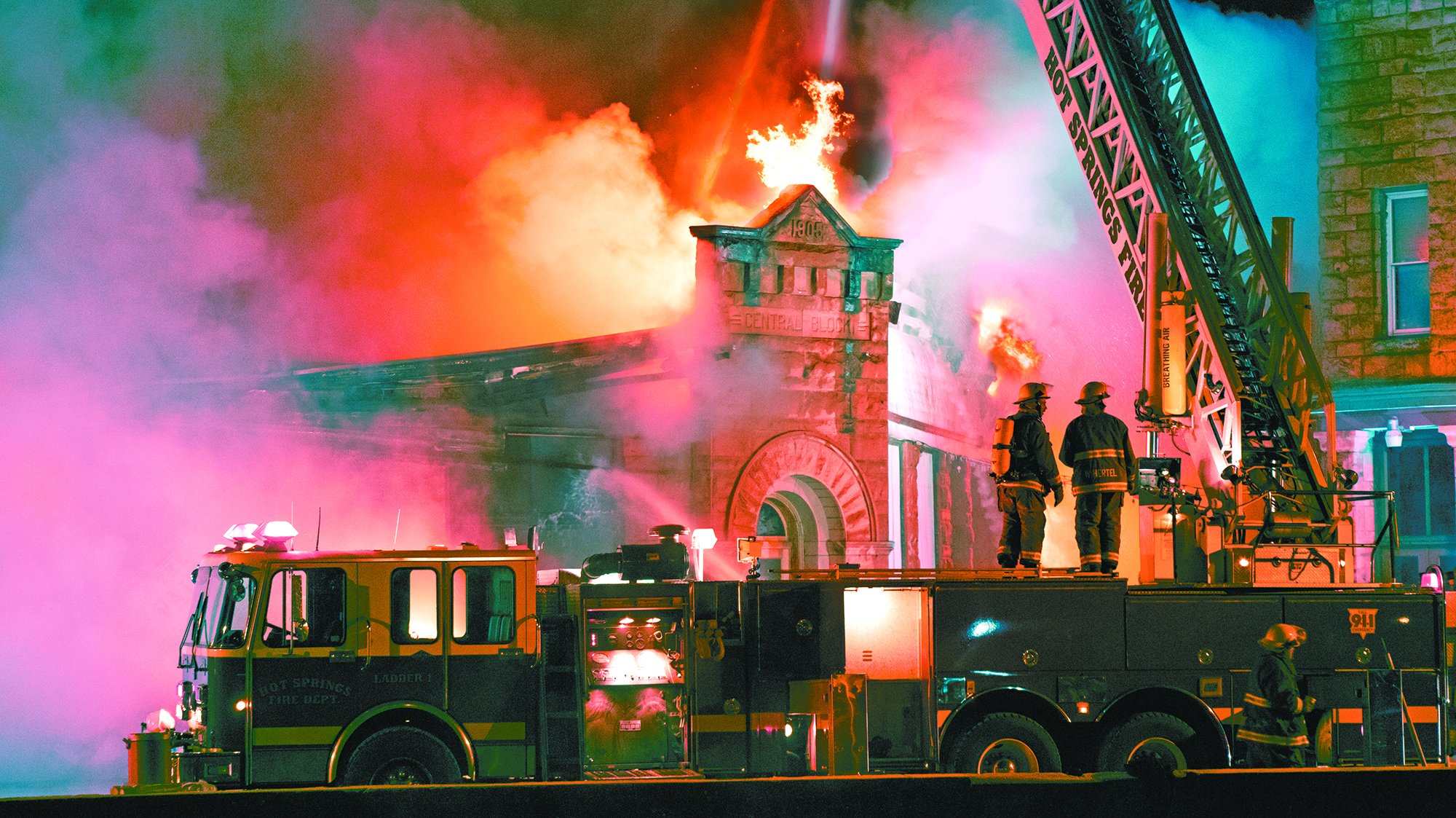 A pair of Hot Springs Volunteer Firefighters stand on top their department’s ladder truck as flames inside The Vault shoot skyward.

HOT SPRINGS – The Vault has turned a page since Greg Gunwall and Kris Bogner took ownership of the local coffee house, pub and grill at the end of 2018. Gunwall, Bogner and staff have shifted the restaurant’s reputation to a hub of family-focused food, drink and community involvement.

The latest chapter in The Vault’s story occurred last Monday, Feb. 17, when a fire destroyed the restaurant and two other properties on North River Street.

In a brief conversation with Gunwall the following morning after the fire, he said he received a smoke alert from his alarm company on Monday night at 8:22 pm. When arriving on the scene, he entered The Vault building in an attempt to discover the source of the alarm.

After visually checking the first-floor dining and kitchen areas, he said he proceeded to check upstairs. On the second floor, Gunwall encountered thick black smoke, forcing him to evacuate back outside.

As local authorities arrived, Gunwall was concerned about others still inside the adjacent buildings, perhaps unaware of the fire. He mentioned specifically to first responders the Powers family, whose residence is located behind the storefronts of Heartsong Quilts, just north of The Vault on the other side of China Buffet.

Hot Springs Police Officer Joe Hayashi, originally on the scene with Gunwall, then directed his attention to the Powers’ residence and quickly evacuated those inside to safety.

While regional fire crews were fighting to contain the flames over the following 12 hours, Gunwall and Bogner stood street-side for the extent of the blaze, watching as the fire consumed their block.

Early Tuesday morning, Gunwall took stock, with his remarks reflecting a mournful sort of optimism as he chatted quietly with Bogner.

“It’s sad. Just so sad,” he said to a fellow bystander.

This week, as insurance inspectors schedule to conclude their efforts on Wednesday, Gunwall is busy staying in contact with all manner of area supporters, who have overwhelming offered their assistance and support. Over the weekend, local contractors Mossett Construction and Spitzer Construction began their assistance by installing a chain-linked fence around the perimeter of the fire. They have also indicated their desire to assist further with the cleanup effort, along with The Vault’s staff, who is also ready to lend a hand.

Assistance has poured their way in many forms, Gunwall said, with some to help reduce the financial strain from sudden unemployment and others to merely provide solace.

The community’s expression to help Gunwall is likely a reflection of all the graciousness Gunwall has extended to the community since he has taken over operation of The Vault just over one year ago.

A graduate of Hot Springs High School in 1989, Gunwall has quickly built a reputation as a business owner and entrepreneur who is quick to provide assistance and support to any effort that will benefit the town, including becoming the sole financial sponsor to the D.A.R.E. program in town and a big contributor to Toys For Tots. He also organized a free BBQ at the school earlier this year to welcome students back to class after the summer break. These, and many of his other community endeavors, helped make him a nominee for the Hot Springs Area Chamber of Commerce’s Citizen of the Year honor, which will be decided at a banquet on March 14.

In a post on The Vault’s Facebook page last Wednesday, the owners stated: “First things first. I have to say that you are all so amazing. The love and prayers that have been sent are so amazing and gives our hearts so much warmth. This community is truly one of a kind and makes me so proud to call it home.”

Amidst last week’s chaotic storm of interviews, phone calls and paperwork, Gunwall remained focused on providing support to his people any way he can.

Last Thursday, Feb. 20, Gunwall met with his staff at the Mueller Center to catch them up to speed.

“I want you to know, we care about you. We’ll figure this out,” Gunwall told his people.

Gunwall explained his account of last Monday night’s events to his staff and provided them a rundown of the process towards rebuilding. He also laid out options for getting his people paid.

He then left his staff with a few comments regarding his respect for the City of Hot Springs, the genuine efforts and moral conviction of Mayor George Kotti, and all the heartfelt sentiments he’s received from their community: a goldmine of prayers, love, and support.

Though such a sudden and tragic turn of events, Gunwall and staff remain tenacious in its wake. He said last week after browsing through some of the remains of his business, the bar is still standing, as are some barstools and other items like the juke box and ATM machine.

As of now, Gunwall and The Vault staff are working to maintain current obligations to provide banquet and bar services for upcoming local events, including the Hot Springs Area Chamber of Commerce 80th annual Meeting and Banquet next month. Gunwall said he is not ruling out operating from a temporary location to fulfill those needs.