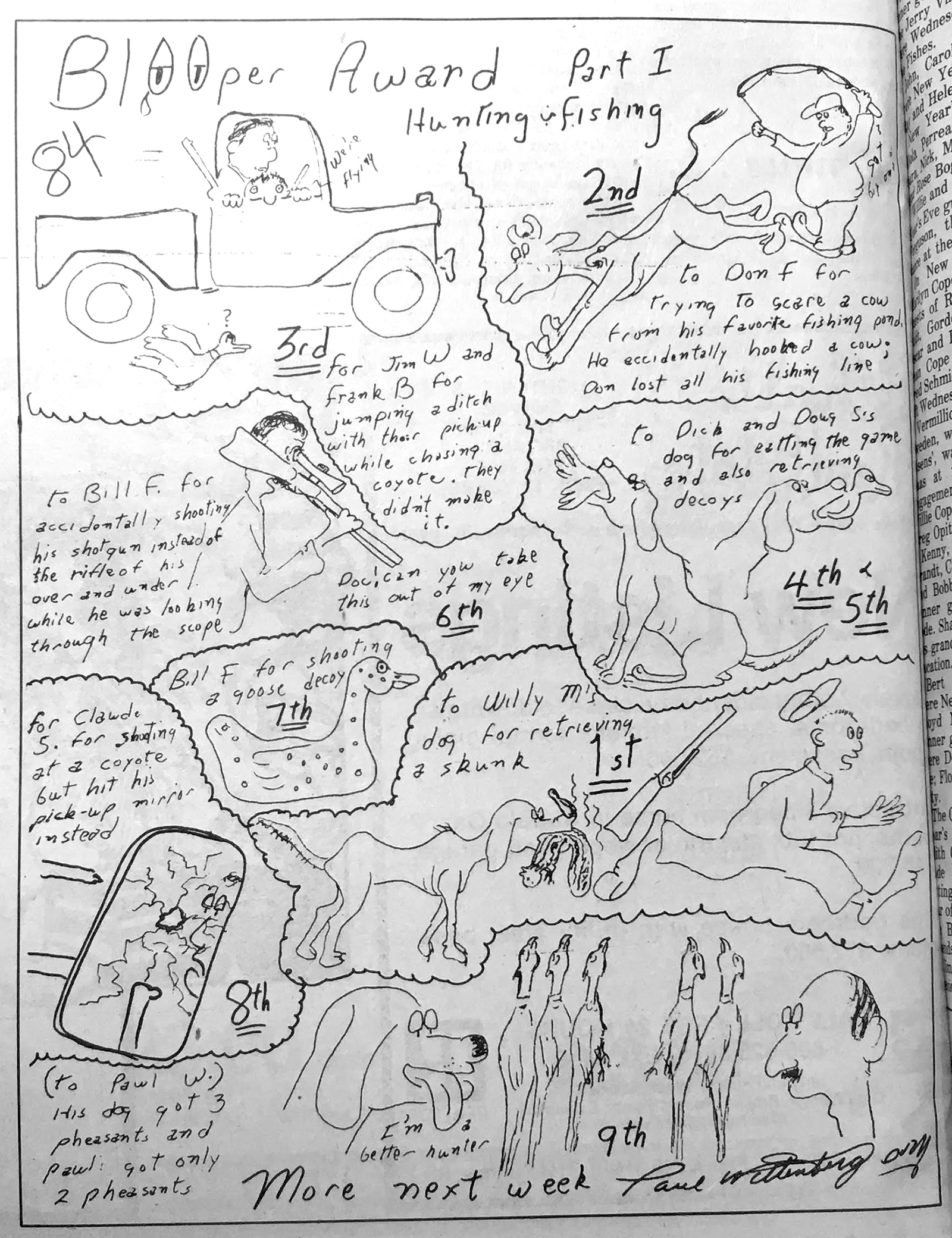 Wittenburg’s annual “Blooper Awards” published during the month of January each year in the Hot Springs Star were one of his most popular features that highlighted the past year’s humorous happenings in the county.

HOT SPRINGS – At one time, the local Paul’s Drug in downtown Hot Springs was the place to be.

Owned by Paul Schuchardt, it’s where the town’s “movers and shakers” hung out for coffee, shared stories and discussed the topics of the day. It’s also where then-Hot Springs Star Publisher Charley Najacht and local veterinarian Dr. Paul Wittenburg came up with the idea of adding an official cartoonist to the local newspaper in August of 1977.

For the next 30 years or so, Wittenburg’s cartoons were a staple of the weekly publication’s editorial page. Following an extended break from cartooning in the newspaper for many years, he brought it back to the Star in 2019 until a few months before the newspaper was sold to the Fall River County Herald this past December.

Wittenburg, who is a retired veterinarian and founded the Fall River Veterinary Clinic in 1966, still lives in Hot Springs and last week celebrated his 80th birthday.

In an August 17, 1977, Hot Springs Star article that announced Wittenburg as the newspaper’s new “official cartoonist,” where he planned to “reflect on a variety of issues, mostly local,” he told the paper that his first cartoon was when he was 11 years old. The first subject of that cartoon was a singing teacher.

“I was mad at her because she slapped me. She thought I was making fun of the song,” Wittenburg was quoted in the article. “I still remember her name. Mrs. Jenkins.” He then vowed to never sing again after the incident, but then began drawing more and more cartoons, with many of them aimed at teachers or professors.

Wittenburg later became a cartoonist for his high school and college newspapers, adding that it was a good way to find out which one of his professor’s had a sense of humor. He said he was once fired as the cartoonist for his Catholic school’s newspaper for being “too rough.”

Through college, his main character was Joe Vet, a sad-looking character with big feet, which is similar to many of the human subjects he drew in his cartoons. Most prominent in his cartoons for the Star was his use of animals that spoke and conveyed the message he was trying to make.

In an interview at his home last week, Wittenburg said one the of the things he noticed over the course of his many years as a cartoonist is that people used to be able to laugh at themselves more than they do now. During his time as the Star’s cartoonist, there were only two or three instances where he extremely upset people to the point that they threatened to sue him.

One of the instances, he said, was when he drew a cartoon of former mayor Ward White coming out of a manhole with the caption, “Guess who came home for the election.” Wittenburg said the caption played off the popular movie at the time called “Guess Who’s Coming to Dinner” which was about a white woman (Katharine Houghton) who brings her black doctor fiance’ (Sidney Poitier) home to meet her parents.

At the time he drew the cartoon, Wittenburg of course thought it would be taken humorously, and initially, he said White took it that way. But over time, it was not taken that way, and in hindsight, Wittenburg admitted it wasn’t that funny and he wished he hadn’t drawn it and apologized to the people.

Never intending to hurt anyone personally, and considering all of the controversial topics he addressed in his cartoons over the years, Wittenburg said he feels that upsetting only two people in 30 years isn’t that bad.

Despite being a local business owner throughout his time as the Star’s cartoonist, which sometimes ruffled a few feathers in town, he doesn’t believe that it ever had a negative impact on his business.

Cartooning had always simply been a way for him to express himself artistically while sometimes venting his frustrations. He said he never struggled for inspiration on what to draw on a weekly basis, and often had multiple cartoons drawn for any given week and often submitted them at the last minute in case something else would happen and spark and new inspiration.

Wittenburg added that he also always tried not to show a political bias in his cartoons and also didn’t identify himself as either Democrat or Republican.

One of Wittenburg’s most popular cartoons was his annual “Bloopers” cartoon, which over the course of about three weeks in January, summarized a weekly Top 10 listing of the past year’s funny happenings that took place in the area.

“Some people tried to get in the bloopers and were upset if they didn’t,” Wittenburg recalled, while mentioning Speed McCallister as one of the those people who purposely tried to make the blooper reel each year.

Najacht, who was the Star publisher who added Wittenburg’s cartoons to the weekly offerings of the Hot Springs newspaper, recalled last week in a phone interview how his cartoons, “usually didn’t offend anyone, but made a point and made them laugh.”

“Everybody knew Paul. He drew about things that were happening in town,” Najacht said, while adding that in the process, Wittenburg also rarely passed up on an opportunity to poke fun at something or someone.

According to the 1977 news article about him, one of Wittenburg’s very first cartoons published in the Hot Springs Star actually took place a few years prior to him being named the newspaper’s official cartoonist.

“He drew his first cartoon for the Hot Springs Start in the Minnekahta Valley correspondent’s column several years ago,” the article stated. “It poked fun at several residents of that area who were engaged in a ‘bear hunt.’ Positive as they were that they were tracking a bear, it turned out what they were instead tracking was a large dog, much to their embarrassment.”

Wittenburg said last week that he feels one of his greatest attributes is the ability to always find the funny side of something. Even in a tragedy, one can also often find an entertaining or humorous side, he said.

And its that ability to always find the “lighter side” of tough situations that has likely helped him most – and kept him smiling and laughing at himself – over the past 13-plus years since being diagnosed with cancer, which is something he continues to fight hard against today.