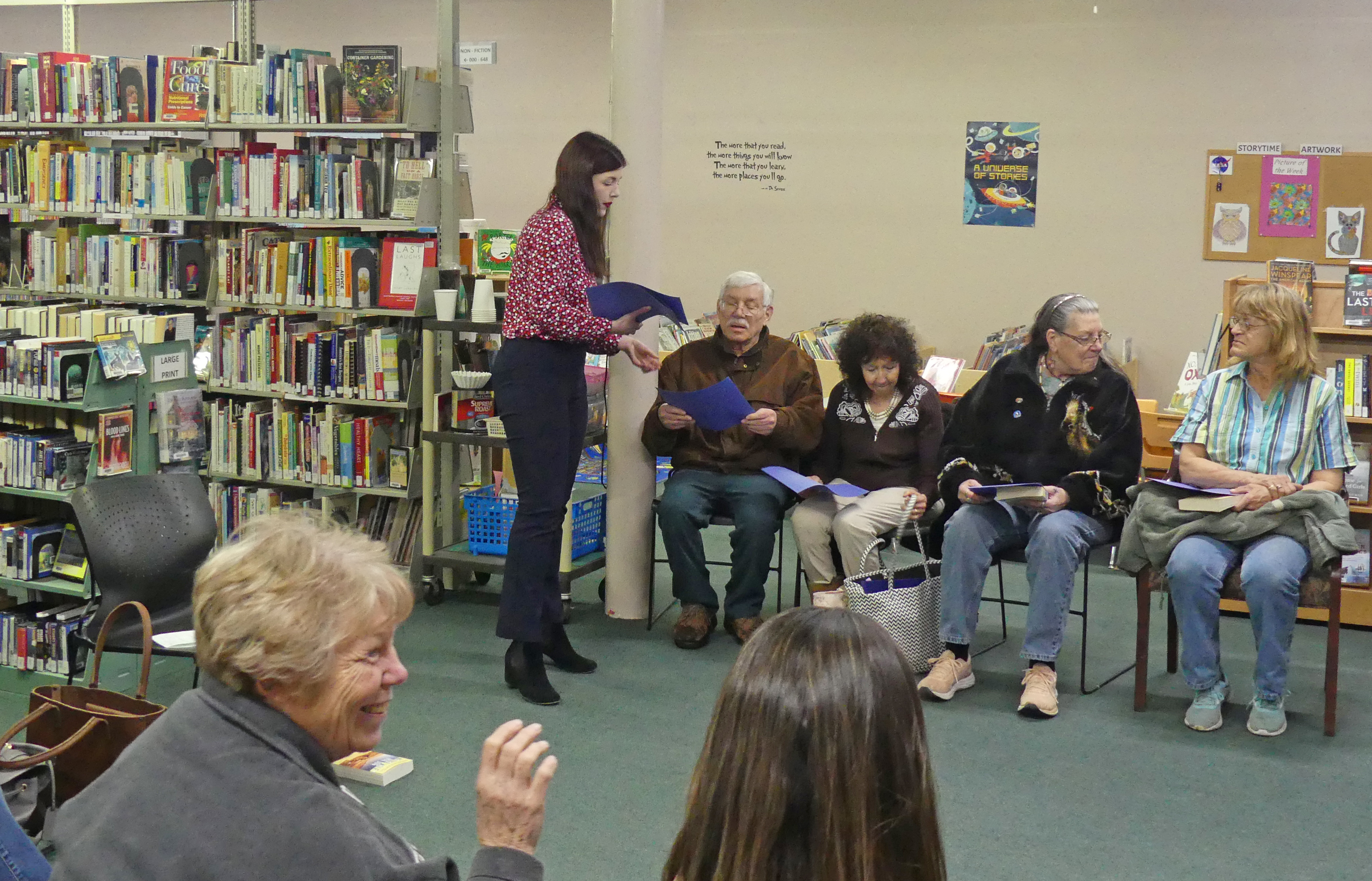 Molly Barari led a review of Kent Nerburn’s book titled Neither Wolf nor Dog on Monday evening at the Edgemont Public Library.

EDGEMONT – The Edgemont Public Library saw a good turnout of 16 people on Monday evening for a program led by Molly Barari of the South Dakota Humanities Council on Neither Wolf Nor Dog by author Kent Nerburn. The book offers a perspective on white-Indian relations from the viewpoint of a Lakota elder who experienced reservation life during the boarding school era.

Barari began engaging participants by asking them to write down one word on a piece of paper she gave them that would best capture the meaning of the book as a whole. “Freedom,” “eye-opener,” “spiritual,” and “conflict” were among the terms offered in response.

Readers marveled at how the book came alive to them, especially if their younger days included time spent on a reservation or close by such that they became familiar with Native individuals. One person who read the book said that Dan, in the book, was hurting and that he had to find a way to let out those emotions and Nerburn provided a vehicle for relief by recording and publishing his thoughts. “Would you call Dan biased?” asked Barari. “Only in the way everyone else is,” someone responded.

Nerburn’s adventures with Dan and Grover, who acts as something of an intermediary between the Indian elder and the author, includes visits to some prominent historical sites in the conflict between Indians and whites. Cruising across reservation lands, they visit Sitting Bull’s burial site at Standing Rock Indian Reservation and also the site of the Wounded Knee massacre on Pine Ridge.

Participants were asked if they had ever been to Wounded Knee and a couple said they had and described Wounded Knee as a site that was eerily silent with no natural sounds of birds singing or insects buzzing about as they do elsewhere on the prairie landscape.

It was said that one could “feel the pain” when visiting there. To people who live by the battlefield or drive by it every day it is perceived as still being ‘alive’ to them, whereas others regard it as merely ‘ancient history’, according to one person in attendance. Reference was made to one passage in the book that made the distinction between the words used to describe a scenario depending on whether it was carried out by whites or Indians. One example from the book is when Dan points out that if natives won a battle it was referred to as a ‘massacre’, but if whites won it was called a ‘victory’ and that in either case children and other family members lost loves ones.

Barari insisted that each character in the book has their own prejudices and flaws and that this exemplifies that those of us living in the present day need to judge people as individuals. She also pointed out the huge role that the lands that readers are taken through in the book play as a character all by itself.

Originally published in 1994, Neither Wolf Nor Dog has garnered much attention from indigenous people from various places in the world whose ancestors encountered European people looking for places to establish settlements and usurp land and other natural resources for their own, according to the author. The book includes references to cultural stereotypes, mischaracterizations and misunderstandings among other frustrations experienced by native people that are brought to light in conversations between Dan, a Lakota elder and Nerburn, who came out to record Dan’s ideas as a result of phone call made by Dan’s granddaughter. Nerburn states in the foreword that he received the greatest gift one can receive when told by a native person whom he gifted a copy of the book that it had helped to heal emotional wounds that had been present since childhood.

Neither Wolf nor Dog is the first of three books by Kent Nerburn exploring the connections and revelations made through time between himself, Dan, Grover and the other featured individuals. Those who enjoy this story may also choose to read its companion books The Wolf at Twilight, and The Girl Who Sang to the Buffalo.