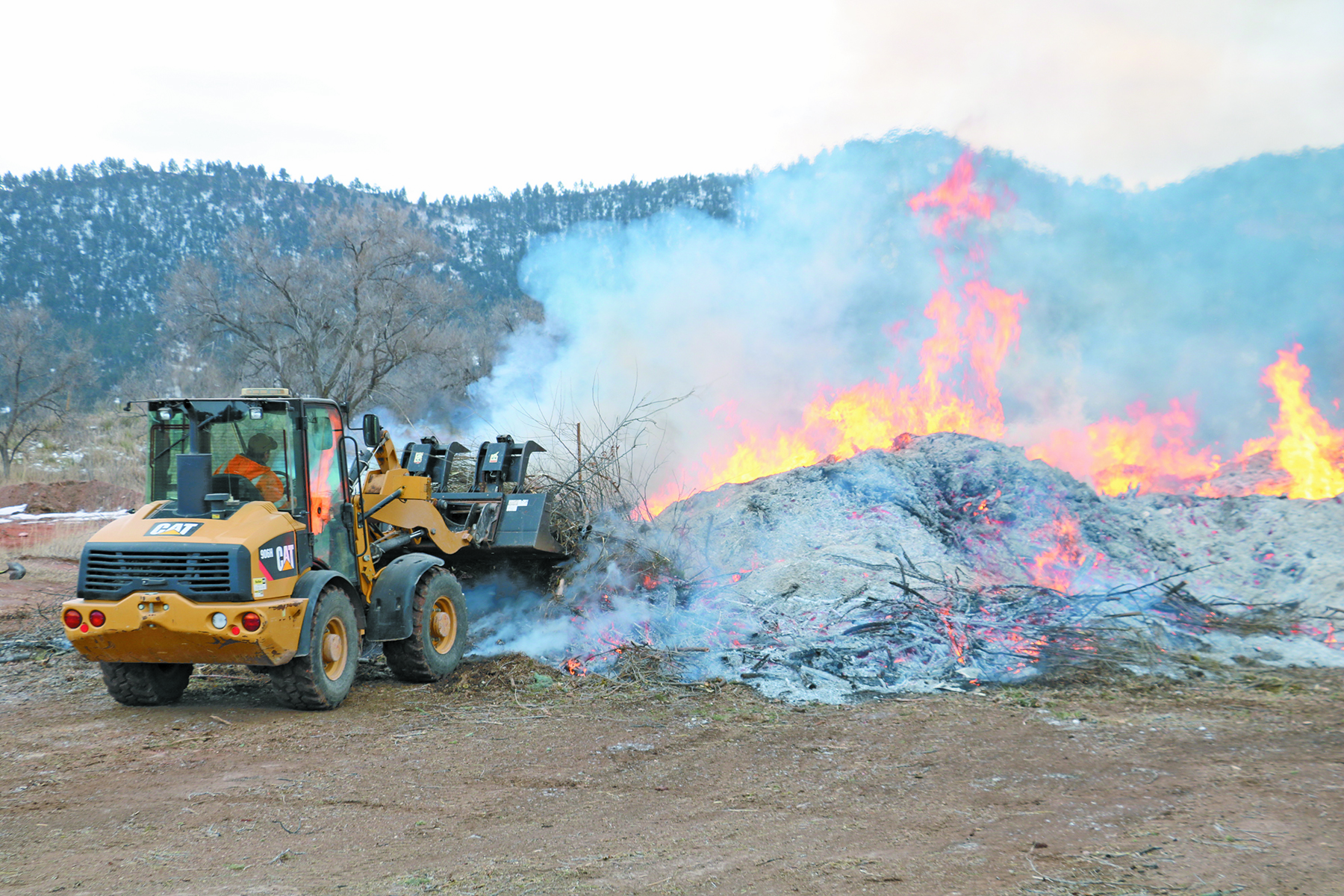 A Hot Springs City employee pushes some unburned brush further towards the center of the pile last Wednesday morning at the landfill.

HOT SPRINGS – By all accounts, last week’s one-time burning of the large brush pile at the Hot Springs City Landfill was a “great” successful, according to Public Works Committee Chair Bob Nelson.

He said the city worked closely with South Dakota Wildland Fire, who gave the recommendation to go ahead with the burn to commence on Wednesday, Feb. 12. Nelson said that judgement call was made the previous day on Tuesday, Feb. 11, after it was determined favorable weather conditions were predicted, in terms of temperature and wind.

The methods used to burn the pile, Nelson said, were a combination of ideas, including those brought to the table by personnel with South Dakota Wildland Fire, and also Councilman Dave Burris, who has previous experience. Burris recommended burning the pile from the inside-out by utilizing a piping system to bring oxygen into the center of the pile.

Nelson said kerosene was also used to wet the pile, with flares to ignite it at about 7:30 a.m. Once ablaze, he said the conditions allowed for the smoke to climb straight up into the air. Later in the morning, winds began to push the smoke southwest up Hwy. 71, but it appeared to be high enough as to not bother nearby residents much, nor Fall River Health Services which is located further east of where the smoke was headed.

Nelson said he personally touched based with a number of nearby businesses before the pile was ignited to let them know what was going on, and encouraged them to call city hall if the smoke became an issue.

The pile burned throughout the day and also overnight. City personnel stayed onsite and monitored it throughout the night. It continued to burn all day on Thursday, as well as through another night. Workers spread out what remained of the pile on Friday morning until it burned itself out, Nelson said.

With a wind switch on Thursday, he did say smoke did get directed into the city, but if there was any negative impact, it was minimal.

Despite the apparent success of the burning of the brush piles, Nelson doesn’t expect burning to become standard operating procedures at the landfill. He said the Public Works Committee will continue to look at various options to eliminate the piles, which may include a regularly scheduled plan to chip them or possibly even moving the piles elsewhere.

He added that it is the Public Works Committee’s intention to continue providing free and convenient brush disposal for city taxpayers, but they have discussed the need to limit the hours of access to the landfill to only when city personnel are present, due to the city’s landfill permit.